Almost two years ago, news bubbled up that David S. Goyer — the man who wrote stories and screenplays for Blade, The Dark Knight, Jumper, and a film of Robert Heinlein’s The Puppet Masters, among many, many others — would be adapting an obscure, thirty-year-old novel by horror master Peter Straub as a limited TV series.

The news — though it hasn’t been followed up with anything substantive, yet, and believe me, I check every day — made me happier than any development news in a long time. Straub, though perennially praised, still doesn’t get the kind of critical attention he deserves. And though he has since produced more mature books, Shadowland remains my favorite of his – and a direct inspiration for my own second novel, The War Against The Assholes.

It is a book about art, love, lust, death, excellence, and failure, and the hideous cost simply surviving exacts from all of us.

It’s about two boys, Tom and Del, best friends, both with dead fathers, who spend a summer with Del’s elderly, charming, and constantly drunken uncle Coleman Collins. Who turns out to be not merely the greatest and most terrifyingly powerful magician of his age, but an ice-hearted sociopath and serial killer. All in the pursuit of greatness, of course – which Tom, not Del, turns out to possess the innate ability for. The conflict that results soon burgeons into a claustrophobic, psychological horror story. The body count is high, the deaths spectacular, the outcome bleaker than bleak (though not without a tinge of hope). 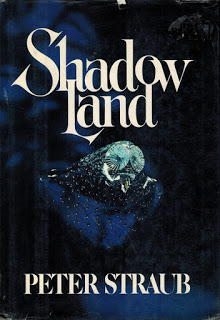 It is, in other words, a book about magic and what being able to perform it would actually do to people — the cruelty and the compromised heroism it would unleash.  No other worlds to become king of, only this one, and only by violence and greed.  No noble crusade against an archvillain — the archvillain here is the master and teacher. No trappings of escapism: Tom and Del escape their dreadful boarding school for a place even more penetrated with dread, where hierarchical violence reigns an in an even more naked, even more perverse and perverted way.

The set pieces that Straub creates are almost whole worlds unto themselves. A gang of professional thugs (or are they industrialists and power brokers?) traveling through the night in a private train car to a pre-dawn match of badger-baiting. A dangerous, pathetic loner at Tom and Del’s school teaching himself how to fly among collages of pornographic and violent images clipped from news magazine. Collins own biography, his transformation from child of East Coast privilege to master magician, takes him from the endless horror of the First World War in France to the music halls of London and beyond.

A book so rich and so complicated needs the long format TV offers to work on screen. The project may never come together, and it might arrive and fail to live up to the book itself. But TV is an increasingly good home for serious adaptation of the literature of the fantastic. Shadowlands deserves the wider reach such adaptations bring.

Here’s hoping that the fates smile on Goyer, Straub, and their dark vision.

Sam Munson’s writing has appeared in n+1, Tablet, The New York Times, The Wall Street Journal, The National, The Daily Beast, Commentary, The Times Literary Supplement, The New York Observer, The Utopian, and numerous other publications. His first novel, The November Criminals, is being adapted into a film starring Ansel Elgort and Chloe Moretz, and will be released by Sony Pictures Worldwide in spring 2016. His latest novel, The War Against the Assholes, is in stores now. He lives in Harlem with his wife and son.  For more details visit SamMunson.com