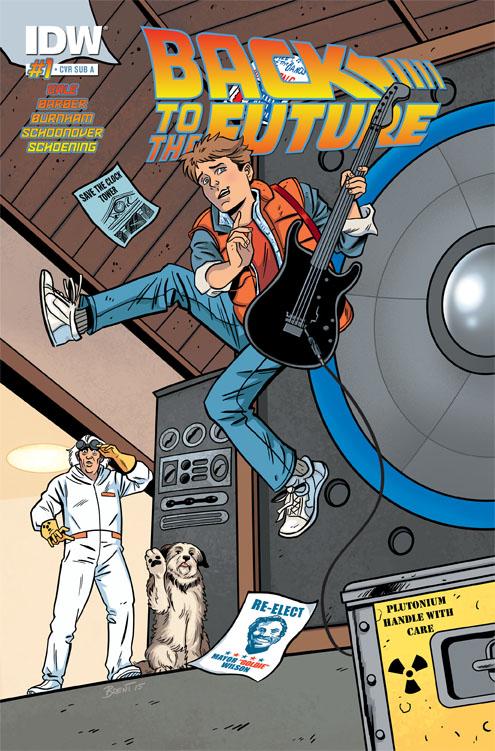 Great Scott! As the smoke begins to clear on another magnificent San Diego Comic-Con International, IDW Publishing is OFFICIALLY announcing the next great property to come to comics is none other than Back to the Future! Two days ago, the crowd at IDW’s panel sat stunned as Biff himself arrived, grasping a freshly printed copy of the 2016 trade paperback collection and proclaiming it to be the best-selling book of the year. After traveling to the end of the Con, IDW can now confirm it’s true!

IDW is proud to reveal that with the original movie’s creator/screenwriter Bob Gale on board, the untold adventures are headed Back to (and from) the Future!

“We’ve subtitled this ‘Untold Tales and Alternate Timelines’ because for years, fans have asked questions about things that happened before the events of the trilogy, in between the events of the trilogy, or in our alternate realities,” said Gale. “In this series, we’ll finally answer some of those questions, with our focus squarely on the characters everyone loves.”

Joining Gale in these tales through alternate timelines are two familiar IDW writers: John Barber (Transformers) and Erik Burnham (Ghostbusters), who together break down the issue into two separate stories that build upon the iconic characters and time periods from the films. The artistic team will also be split between Brent Schoonover (Batman ’66) and Burnham’s long-time collaborator, Dan Schoening (Ghostbusters). Each subsequent issue will feature rotating artistic teams, who will add more fun stories to this rich universe.

“I can honestly say the enthusiasm surrounding BTTF’s inclusion into our vast library of licensed comics is absolutely palpable here at the IDW offices and amongst the talented creators we’ve recruited to help us bring Bob Gale’s new visions to four-color life—enough excitement to energize a flux-capacitor or two, that’s for sure!” said IDW editor Tom Waltz.

In the first tale of the debut issue, we head back to 1982 and witness the very first meeting between Marty McFly and Doc Brown, before their incredible adventures together began. Then in the second chapter, we head back even farther to 1943 and see how Doc Brown got himself mixed up in the infamous Manhattan Project! This first issue will feature three standard covers, by Schoening, Schoonover, and Amy Mebberson (My Little Pony). Additionally, Back to the Future #1 will join in on the fun of Artist’s Edition Month in October with an original art styled cover by Schoening!

Mark your calendars and set your watches for October when this 4-part series races into comic shops!