When we last left our platinum-haired spellcaster, Sabrina was on the verge of going full-witch. She was knee-deep in the black arts when during the ceremony, her boy toy Harvey made a surprise appearance to the little groovy ghoulie get-together.

As Harvey runs for his life, Sabrina is left to deal with the wrath of the coven, who are unsympathetic to the teen dream, despite the fact she caught unawares and was set up by Madam Satan.

So while Sabrina deals with the fallout, Harvey must contend with doppelganger Sabrina and her lip-locking skills. 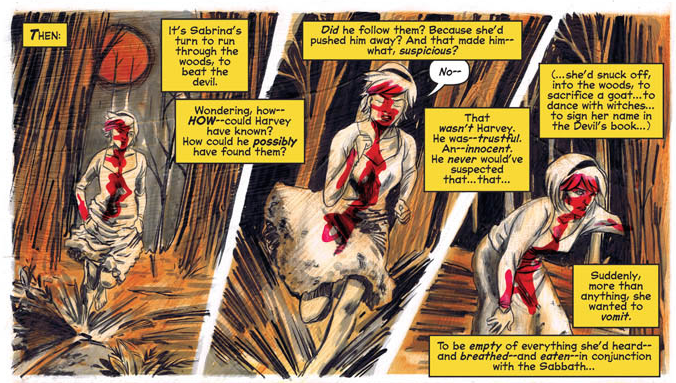 The series takes a surprising twist from the original material, in which Harvey always played second fiddle to Sabrina. Constantly in the dark about her true nature, Harvey followed Ms. Spellman blindly and with enough loyalty to make a German Shepard take note. The Chilling Adventures version of the 16-year-old dreamboat deters from that version of Harvey once and for all. 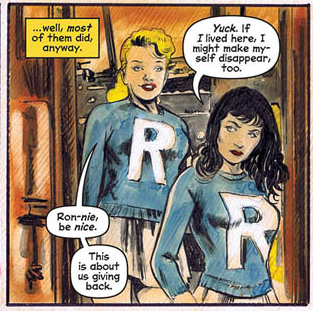 The fourth issue of the series continues to warp the traditional Archie character arcs as Riverdale’s most beloved frenemies Betty and Veronica find themselves in Greendale.

This B&V look more like Bettie Page and Lana Turner than identical toons with different hairstyles, adding to the overall retro look the comic has mastered.

They also appear to have a harsher edge, as seen when meeting up with Madam Satan.

The story also make a sly shout-out to horror meister Stephen King borrowing a few names from The Body and Christine.

The usual warm color palette of “Chilling Tales” takes a small detour in its autumn-inspired scheme of yellow, orange and black to make way for the green of the forrest.

Specifically, the bright green vines that entrap Sabrina, calling to attention the danger that surrounds the teen.

The comic is a slow burn towards Madam Satan’s ultimate plan, but it is the small shocks of horror that keeps readers interested. While the ultimate goal of the antagonist is still unknown, the use of sudden violence keeps things afloat and keeps the pages turning.

From the cannibalistic nature of Sabrina’s aunts to the face-stealing tactics of Madam Satan, the comic rebuilds the Sabrina story from the ground up, using the look and tone from ‘50s monster mags and Tales from the Crypt as a major influence.

There is danger, young Sabrina. Beware, but continue your journey. It is too good to not follow. 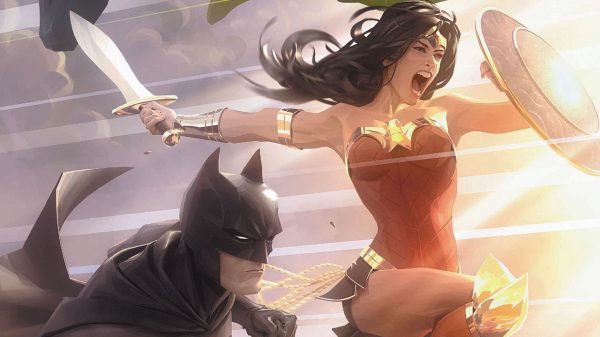 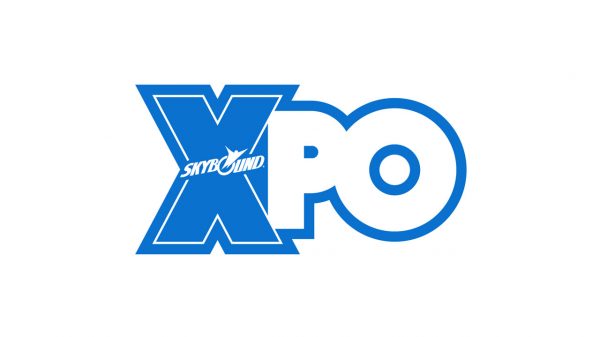