If you ever played with LEGO bricks (and who didn’t?) you have to see A LEGO Brickumentary, a loving and surprisingly moving tribute to the eternally popular toy bricks. The documentary, which is produced by LEGO, grants unprecedented access to the company and its master builders, but also follows the diehard fans (AFOLs, Adult Fans of LEGO), celebrity devotees, and every innovative way LEGO bricks can be used by kids, artists, filmmakers, architects or scientists.

Who knew where was so much to LEGO bricks? The film takes us back to their creation in Denmark in 1949 to the company’s near bankruptcy and its spectacular fan-driven reemergence. We also go on set of The LEGO Movie as master builders assemble the huge LEGO city for the live-action sequence.

Forces of Geek met up with co-directors Daniel Junge and Kief Davidson in Los Angeles, where they discussed LEGO and some of its more controversial aspects.

FOG!: Were you both LEGO fans growing up?

Daniel Junge: Yeah, I certainly was. Definitely, we were a LEGO family. Classic Space [which debuted in 1978] was my series. The blue and yellow bricks mean a lot to me. That’s why in our history segment, we tip our hats to Classic Space. But I’m not an AFOL.

Kief Davidson: I was anything Star Wars. So the Star Wars Millennium Falcon, the X-Wing Fighter LEGO ships became integrated into the routine. I remember really early on just having a small box and the pieces would get buried in our four- to five-inch shag carpet. So I just gave up after that.

Do you still have your LEGO?

DJ: My brother managed to appropriate my LEGO bricks. I’m going to have to have a discussion with him at some point.

Where did the idea come from to make this?

DJ: I wish I could say that we were both dying to make a LEGO film, but the way that it came about – and this is the way some docs do come about, serendipitously – the executive producer Jim Packer approached me to do a film on Brickworld, which is a LEGO convention in Chicago. It’s a great convention, a lot of fun, would be a fun film. But I thought maybe doing something on the entire community, which I was learning about, would be a bigger deal.

Then thought, “Well, no one’s made the definitive LEGO movie. Maybe we can approach the company and see the toy from the inside as well.” So we did that and they said yes and we were off and running. And it’s just way too big a film for me and my one brain. So Kief’s a longtime friend and a filmmaker I respect. I asked him to come on board and we collaborated fully on the project.

KD: And I  just wanted to make a LEGO documentary. I wanted to do something that was actually fun and family-oriented*.  Something that my kid could watch instead of waiting 10 years to show him.

Have your kids seen this?

DJ: So, my daughter’s actually going to watch it opening night in Denver at our local arthouse theater. We’re going to go a regular movie theater and see dad’s movie. It’ll be a special moment.

Is she a big LEGO fan?

DJ: She’s getting there. She is a fan of the LEGO Friends series, that’s mildly controversial. She loves that series.

Why is it controversial?

DJ:  There’s been some people who’ve made hay of the fact that because it’s pink and there’s female themes that it’s a certain thing. There’s been some feminist critique of it. Probably rightfully so. But at the same time, my daughter is drawn to that and she’s building. This is her entry-level into building and engineering and artistry and creativity. I’m all for it.

I love the woman [Alice Finch] in the film who builds a huge replica of Rivendell out of regular bricks and how she’s become a role model for other girls to get into LEGO.

Was it hard to get fans to participate?

KD: No. It was the opposite.

DJ: It was hard to turn the spigot off!

KD: That’s the challenge of making a film like this: You have so many great stories and so many talented people. Which ones are you ultimately going to focus on? We had our very unexpected storylines and some that became more expected. We start taking with the AFOL community and everyone points to this person or that person.

That’s how Alice came to us. Everyone was like, “You have to see Alice.” (More on Alice HERE). I think it’s really the unexpected story lines that we probably enjoyed the most and gave us the most depth. Like when you start looking at LEGO therapy [for autistic children].

That was incredibly moving and not necessarily something you expect when you go see a movie about LEGO bricks. Were you surprised at all the applications for LEGO bricks and what they mean to so many different people?

DJ: Yeah, I think that’s ultimately what the film was about. The flexibility of this medium, this so-called toy. It’s being used for so many purposes beyond simple play. I don’t think we’re trying to be overtly profound, but hopefully the film ultimately says, “What does that say about us?”

One of the architects in the film, who’s using it for a serious application, says, “Ultimately, we as a species are builders. That’s what defines us a species. And this just a medium that helps to express it.”

You have a segment on The LEGO Movie and also on “brick movies,” which are stop-motion movies used with real LEGO bricks. Did you find that diehard LEGO fans didn’t respect The LEGO Movie because it’s animated?

DJ: I found that most people in the LEGO community really liked The LEGO Movie. And probably because one of the core storyline is around an AFOL and some realities explored in the film there which are true in the AFOL community. For hardcore brick filmmakers, which we show in the film, they respect the purity of working with bricks and stop motion, whereas The LEGO Movie is CG. But I think they all respect that the CG was made to emulate stop motion and did so beautifully.

You were working on your film at the same time as The LEGO Movie?

DJ: Yes. Since LEGO were partners on the film, they gave us access to The LEGO Movie. They were finishing that film and LEGO invited us in to see them finish some of the sets.

KD: We didn’t really know what the film was going to look like. Everything was pretty hush, hush so when we filmed on the set here, that was the first glimpse that we were really getting it.

So the timing of both movies is…

DJ: I think since LEGO is exec-producing both films, they probably had a plan to be making The LEGO Movie and have the consummate LEGO documentary come out soon thereafter. We were a little slower in our process. [Laughs]

KD: How can we be slower than an animated movie? That’s not good.

DJ: There’s just two of us.

How unprecedented is it in the business world that LEGO made a major directional shift and began taking its cue from fans instead of the other way around?

Davidson: Hugely unprecedented. That’s ultimately what brought them back from the verge of bankruptcy. The fact that they did start looking at the fanbase…

Mindstorms [kits that let users build customizable, programmable robots] was really the first big thing that helped change the company. Basically, they let the hackers sort of make the product better. And you look at Cuusoo and having fans come up with their own designs. There’s been a huge transformation within the company and the brand because they’ve embraced who this is supposed to be for.

I don’t think even they realized how big it is.

KD: That’s why it continues to grow. I think people have been able to make it their own. If you want to build sets, you have a large number of them to choose from. If you want to free build, you can take the same bricks that were built in the ’50s or anytime beyond that and mix and match. There’s probably no other toy that does that.

What was the most interesting thing you learned making this movie about LEGO or the LEGO culture?

KD: For me, it was how LEGO can help people. Clearly, we know there’s great builders out there and it can be used in art. But the fact that it can change people’s lives and change society and engineering. Just the short segments we have on minifigs in space… how science is integrated with creativity is really fascinating.

DJ: I agree. I think it was one surprise after another, which is hopefully the way that viewers experience the film. We’re holding off on little gifts to give the audience and those are presented in the way that we found them. We were filming that NASA sequence right at the end of the film because it was something we found out about very late in the day.

So do you see LEGO bricks everywhere now?

DJ: Yes! And that’s because they are everywhere, but I think we’re finely attuned to it.

KD: Yeah, now I see a pop-up on my AmEx bill now more than before and my kid is buying more.

Speaking of seeing LEGO everywhere… As I was waiting in the lobby, there was a video playing with dancing Minecraft figures and they look a lot like LEGO bricks. So it’s a little disturbing to see LEGO-type characters twerking.

KD: There’s some filthy stuff out there. There’s a music video that we won’t even mention the title of. 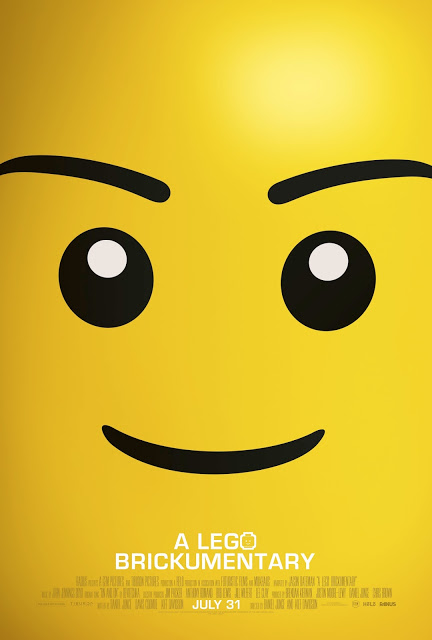 A LEGO Brickumentary is in theaters, in-demand and on iTunes on July 31.
For more details, visit Facebook.com/ALegoBrickumentary