A leader has risen and fallen in an off-world mining planet when journalist Croger Babb uncovers the journal of the leader’s cousin Maia. The mystery and tyranny of the late Arthur McBride continues to unfold today in issue #5 as we learn of Maia’s new friends and Croger’s new problems.

Here’s a truly behind the scenes interview with heavy-hitter talent, Gabriel Hardman and Corinna Bechko, who were kind enough to join us for a deep dive about my favorite series of 2015, alien crustaceans and even “Tricky Dick” Nixon to discuss  the first arc and and tease what we can expect in the months ahead as the world expands and contracts.

FOG!: Corinna and Gabriel, thank you for joining us today to talk Invisible Republic. I have many questions, I’ve re-read the book several times because I’m fascinated by this world!

Are you surprised by the incredible feedback so far?

GH: The response has been very, very gratifying. This is a project that we’ve been thinking about and wanting to do for years and fact is, we’re simply trying to make a book we’d like to read and hope it connects for others so the fact that many people have told us how much they’ve enjoyed Invisible Republic is a great feeling.

CB: It’s quite exciting for us to share this project with an audience at last, so receiving a good response has been extremely encouraging. It’s great to know that people are reading and enjoying what we’ve been working on for so long. 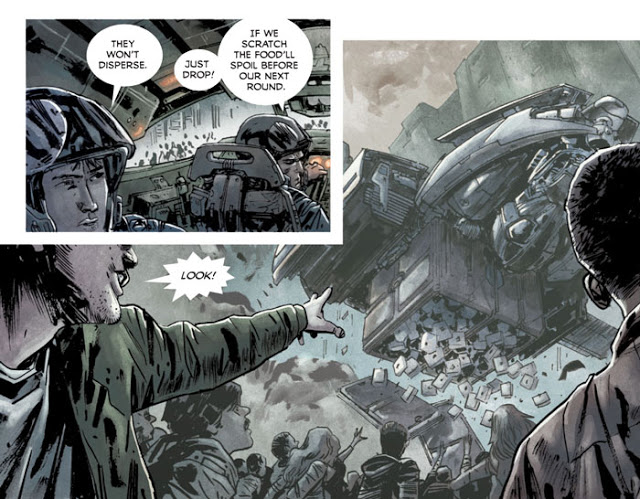 I’m cutting my teeth on the Do Androids Dream of Electric Sheep (Comic adaptation, BOOM! Studios), after years of enjoying Blade Runner. It’s not hard to imagine this is the untold story of what went wrong on one of Philip K. Dick’s off-world colonies.

GH: PKD is a writer both of us love. I’d definitely encourage you to seek out more of his novels like The Man in the High Castle. His books are entertaining and rewarding stuff.

CB: They are also often bonkers, in a very good way. I don’t think anyone else writes like he does. I certainly can’t imagine things going right in one of his off-world colonies for very long!

What is it about any of these worlds—including our own—that the power and wealth ends up being in the hands of the few? And the many inevitably suffer…

GH: I don’t know that we have any answers for these kind of problems. We’re trying to grapple with them and present them without direct comment and let the reader interpret. I feel like that’s the best way for fiction, especially science fiction to reflect our world—in a slightly oblique way that doesn’t provide easy answers. 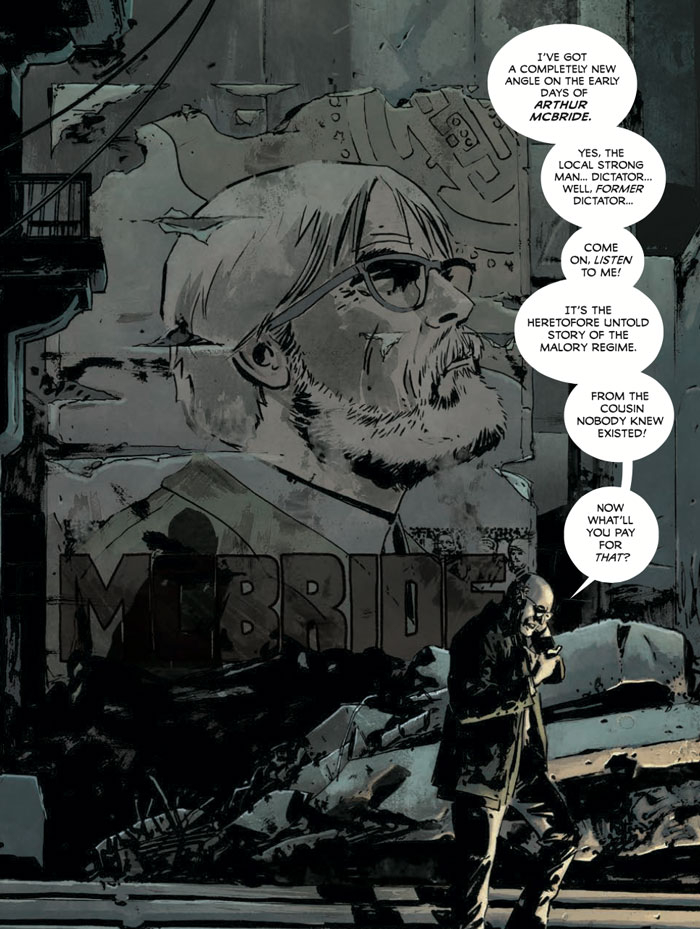 CB: That said, I think there’s always a tendency to believe one can handle power and wealth even when others obviously can’t. History is full of people who tried to do good and ended up doing evil, either as an unintended consequence or as a failed bid for a better world. That’s not to let the wealth-and-power brigade off the hook, since some of them are just horrible from the start, but it is to say that the more powerful you become the less people will tell you “no.” And so some very bad ideas end up being instituted.

Also, having worked around some very rich and power people myself, I can unequivocally say that it leads to eccentric behavior and the indulgence of weird tendencies. And if an individual’s eccentricities tend towards megalomania, a whole lot of people are going to suffer if that person rises to power.

I am most enjoying the cinematic storytelling style, being presented with flashback information from Maia’s journal as well as the present day stuff told through novelist Croger Babb’s discovery of the journal. Why is it no one wants to talk about the fall of the oppressive Malory regime?

GH: Some people want to move on, some fear retribution if the politics shift again. Both the past and the present segments of the book are about turbulent transitional periods of time. I think that’s something we can all relate to.

CSB: Also, if you are raised in a culture that punishes freedom of speech, it becomes a habit to keep things to yourself. Plus, some of those folks might just have found Babb to be obnoxious and didn’t want to help him out by going on record.

Poor guy gets a lot of that. 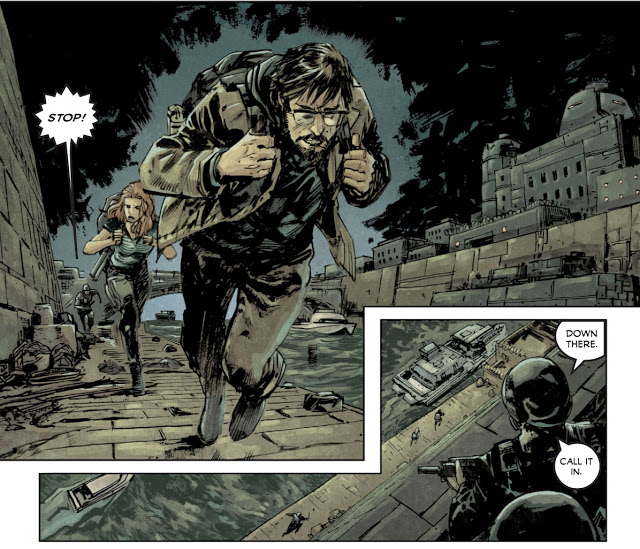 The jobs Maia and Arthur were offered at the spaceport and the ideas of indentured servitude seems too real to those living on the edge in our economy. “We’re a business, not a charity,” seems to be a pervasive attitude toward people that have no other choice but borrow from Peter to pay Paul.

I’m picking up that in the past there is institutionalized racism and classism. Is this what Arthur is fighting against, though he appears to be doing worse things than his oppressors have done to him?

GH: Leaders are complicated. They can stand for positive things yet be deeply flawed personally. Arthur probably more so that the next guy. His motives are something we’ll delve into more deeply in coming arcs but the fact is he’ll always be a bit of a “black box.”

We’ll never tell the story from his POV so you can only really judge his motives by his actions as they’re revealed over the course of the book.

CB: Part of the reason we chose to tell this story over two points in history is so that the point of view can shift. Things that seem reasonable when they’re happening are often later revealed to be monstrous, just as it’s not uncommon for acts that seem senseless or small to have huge repercussions.

My favorite example of this in America’s recent history is Nixon. He was a thug, a criminal, without a doubt a horrible person. And yet he signed the Endangered Species act into law, an action that has had a huge impact on the country and on my entire life. If he hadn’t been president the country would be very different in many ways. 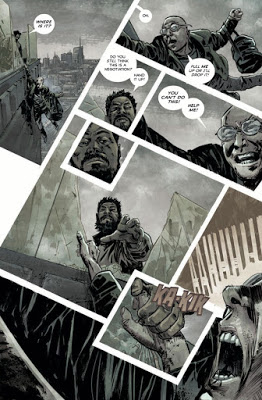 Now that Croger has made this discovery, he is in danger. Was Maia’s voice destined to be silenced, years after she’s gone?

GH: Issue #5 is going to give a clear indication who is behind the threats on Croger – who wants the journal. This is what sets our course into the second arc.

CB: We will learn a lot more about Maia and her place in history during the second arc, I promise!

Gabriel — some hardcore fans know you work in Hollywood, does this experience visualizing stories absolutely form how you write and draw comics? More to the point, are you creating these books to ‘make your own movies’ but in comic form?

GH: I’m making comics to make comics. The form of comics is very different from films and there are a lot of things you can do in one and not the other. Telling a long serialized story that goes way out on a narrative limb the way we’re doing in Invisible Republic is something you can’t do in a film.

To some degree you can do this in a television series but we’re also not constrained by budget they way they are. That said, I’ve learned a lot about visual storytelling from working in films, doing storyboards and supervising previs for years. A lot of the same core visual storytelling rules apply to both film and comics so I feel lucky to have that solid base to start from.

Corinna — one for you, what motivates you to tell a great story? Was Heathentown your first comics work?

CB: Yes, Heathentown was my first! I like the idea of discovering things through fiction. Storytelling and story-consuming are the closest you can come to inhabiting a different persona. How you respond to any given story tells you something about yourself, and possibly about the world.

It’s amazing that humans are capable of that, and I believe it’s one of the few things that we are better at than other species. In fact, many people think it’s the root cause of humanity’s technical expertise, since you have to be able to imagine something in order to figure out how to do it, or at least recognize that something needs a solution.

I won’t pretend that every piece of fiction will change the world for the better, but I do like the fact that it’s such a uniquely human endeavor.

Your teamwork is inspiring! I also like the consistency of the back-matter. Sure we love the pictures of cats but the informed essays and process pages increase my understanding of IR and are better for me than any extra Blu-Ray disc.

GH: We really want the Invisible Republic monthly to be a magazine. The comic is the main feature but we have other articles to support it.

Corinna’s essays have proved very popular so we plan to continue them along with more art process from me and from our excellent colorist Jordan Boyd.

Graphic designer Dylan Todd is also hugely responsible for pulling together the look of the essays and articles as well as the overall graphics in the book.

CB: Thank you for saying so!

Will those pages be in the trade?

GH: There will be a sampling in the trade but really they belong in the monthly magazine as an incentive to pick it up. We feel like the trade should be more like a chapter of a big novel rather than a big magazine.

Look, we have a lot of rules for this kind of stuff! 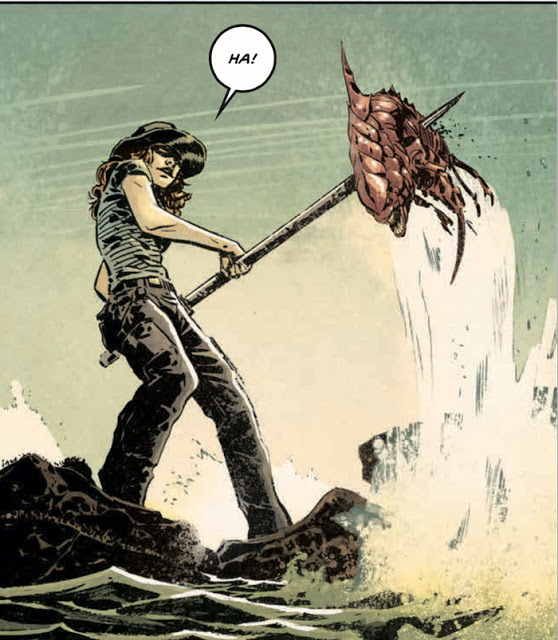 Are there any more creepy crustaceans in the upcoming issues? They’re gross! And what the heck are tubers? 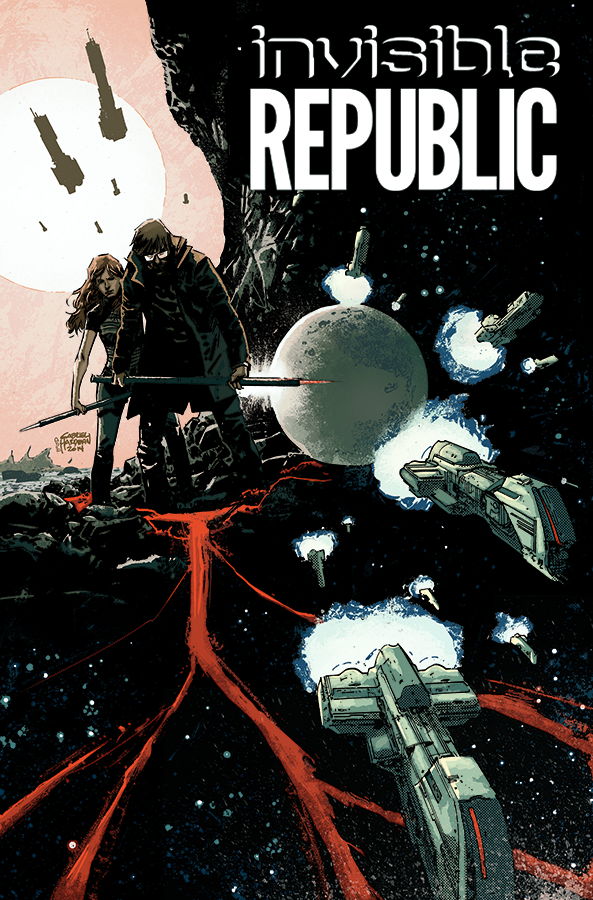