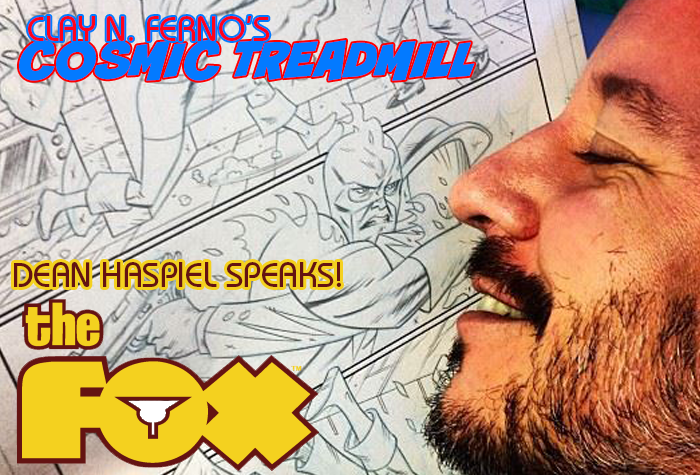 Distilling comics to their ultimate essence and having fun, Silver Age superhero stories is happening regularly today at one of the most unlikely publishers.

Writer and artist Dean Haspiel joins us this week to talk The Fox from Dark Circle Comics. Last summer we reviewed The Fox: Freak Magnet and the exploits of Paul Patton Jr. and family, so it was a pleasure to get with Dean about the new direction he is taking this classic Archie Comics owned superhero under the Dark Circle imprint.

Dean, who writes and draws the book, collaborates with Mark Waid on the writing and that relationship is explained here as well as some of the new heroes popping up in The Fox world.

The most recent chapter of the latest story arc, Fox Hunt, can be found in The Fox #4, out today wherever comics are sold, and that most certainly includes the device you are reading this freaky interview on!

FOG!: Thanks for joining us, Dean! After the success of Freak Magnet were you eager to get working on your next arc for The Fox?

Dean Haspiel: Thanks, Clay! I originally proposed a different idea for the Freak Magnet sequel that involved an ex-girlfriend who was a therapist for disturbed superheroes, the power of fossil fuel and the resurrection of a Tyrannosaurus Rex dinosaur buried underneath the center of Impact City, and a zombie-version of The Jaguar.

But, my then editor, Paul Kaminski suggested we do something called Fox Hunt, and I wrote a different idea.

Things are a little more violent and bloody this time around, while maintaining true to The Fox as we saw in the last volume. How is it for you to get to write and draw some of the more visceral scenes?

My favorite genre is horror. So, turning up the gross factor in Fox Hunt wasn’t hard for me to do. I just wanted to keep some of the zany, Silver-Age superhero tone I established in Freak Magnet, while decorating some of the scenes with terrifying tentacles, exploding heads, and puddles of viscera. 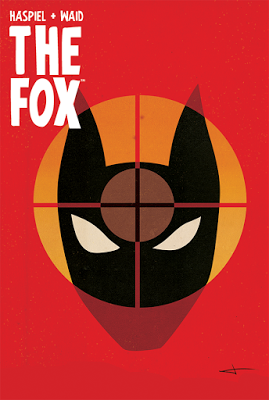 Mind telling the readers how you and Mark Waid split writing duties? Is this a Marvel-style endeavor or does Mark work on the dialogue? It must be great to have such an amazing collaborator!

I plot, breakdown, and draw the story and give Mark Waid my beat-sheet of notes so he understands the character intents and purposes. Then Mark flexes his mastery of narrative knitting and gives the characters their distinctive voices. It’s an honor to collaborate with Mark Waid.

Whenever I read an issue of The Fox, it transports me to a time when comic books made me smile.

We know that Paul Patton, Jr is a family man, and let’s just say that in this first arc his decisions are based on his relationship with his son and his wife. Will The Fox ever really step down and let someone else take over the dangerous mantle of the hero?

Based on all of his mistakes, I’m not so sure Paul makes for a very good family man. At least, not in the way he desires to be. Paul is willing to forfeit The Fox legacy for a normal life but normal won’t let him have that. And, he definitely doesn’t want his family to suit up and fight crime but Paul doesn’t have much choice in the matter.

And that’s where things really get interesting.

There may be a new hero or two in this story, but also some new villains. Is the syndicate of bounty hunters made up of new characters or are some of the baddies from The Mighty Crusaders days?

Except for Mr. Smile, who is a character that was loosely developed and handed to me to fully flesh out (what a head-case he turned out to be), all of the other villains in the comic were appropriated from the past, including from The Mighty Crusader’s rogues gallery.

We knew Fox Hunt needed a bunch of bad guys to come out of the woodwork and do a lot of damage and it was fun choosing a bunch of jerks to present an enormous hassle to the Fox Family. I’m particularly fond of Madam Satan, Dream Demon, Brontosaurus, and Bull-Frog. 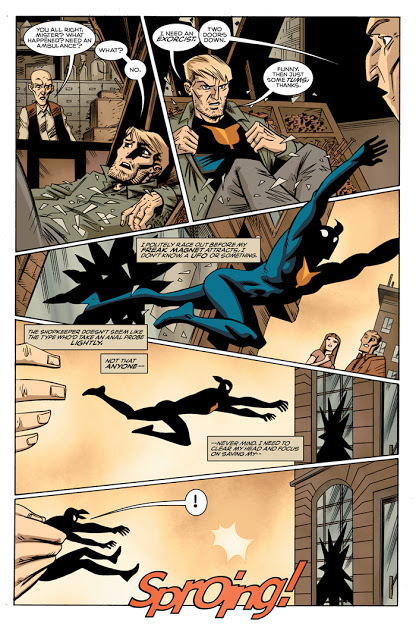 With Freak Magnet and Fox Hunt there have been some imaginative layouts and unusual visual effects. Are you always trying to push the limits of the comic book page rules, or are you working more from instinct and having fun? I can say that the storytelling never suffers and that this is what I enjoy about your art on The Fox.

Cartooning, at its most base, is a reduction of visual ideas boiled down to their narrative core. And, since graphic design helps to better convey visual ideas, the work becomes a formal yet instinctual challenge to innovate the blank page in order to serve the virtues of an illustrated story.

Laying out a story is the hardest part of making comix yet most rewarding.

What are the differences between the inexperienced Ghost Fox and the original flavor? Is Ghost Fox’s lack of experience going to get him in trouble?

The Fox barely has his act together. What do you think his teenage off-spring is going to bring to the superhero table except for unbridled enthusiasm and knee-jerk reactions?

Yeah, Ghost Fox is going to get his ass handed to him and, possibly, take the entire Fox family down with him. 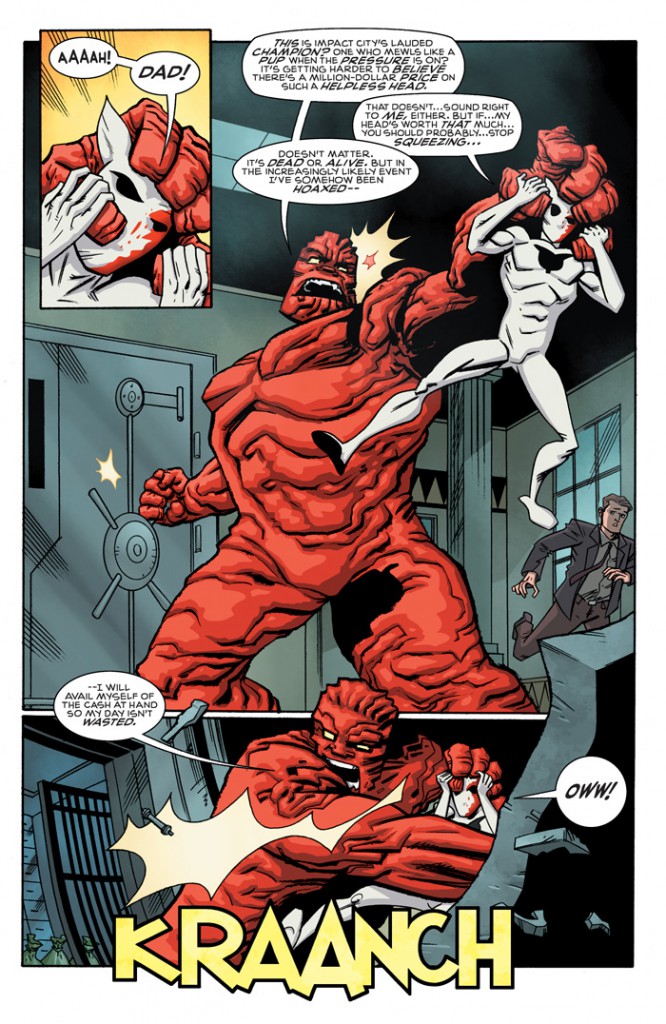 One last question — Paul, Shinji and Mae are going away for a long weekend. Where do you find them?

The Fox Family would rent a cabin in the Catskills and go tubing in a river and skinny dipping in a waterfall and bask in the sun. At night, they would grill BBQ and spark a bonfire and stare at the stars and chase comets.

Paul might make Mae watch reruns of Maude and Good Times on their laptop while Shinji read The Autobiography of Malcolm X. 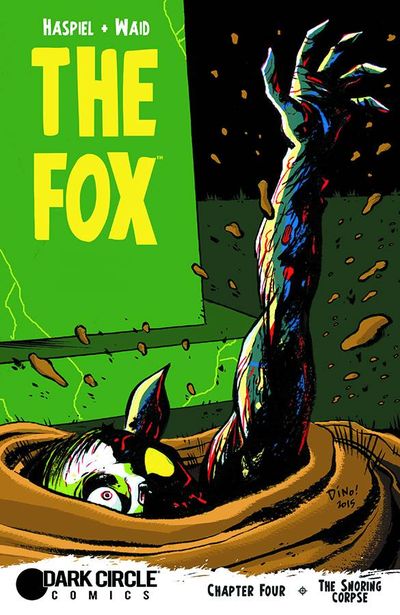 The Fox #4 is in stores today!
For more details, visit DarkCircleComics.com