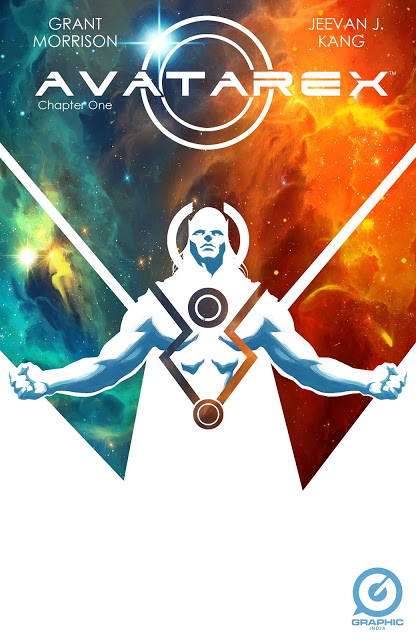 Avatarex will be Morrison’s first digital comic and will feature a new 6-page chapter digitally every two weeks, with the first chapter only on Humble Bundle. In Avatarex, the epic world of living myth collides with the mundane realities and cultural upheavals of contemporary India.

“At a time when I feel I’ve said about as much as I have to say about the American superhero, this is an opportunity to re-imagine the entire concept through a different cultural lens,” said Grant Morrison. “Avatarex is the first digital only comic I’ve written and I’m excited by the opportunity to create for a more accessible global platform.
“I believe that educated young children are our world’s best hope for the future and I’m very proud to be working with Graphic India and Humble Bundle to support Doctors Without Borders and Worldreader to assist those in greatest need and perhaps help inspire the doctors, artists, and leaders of tomorrow.”

In addition, Stan Lee’s Chakra The Invincible, featuring Lee’s first Indian superhero creation, will see its exclusive digital E-book release in this bundle. Based on the animated series, which received over 30 million views worldwide on Angry Birds ToonsTV, and launched on Cartoon Network India.

“I’m thrilled to be working with my friends at Graphic India for the exclusive digital comic launch of my action-packed, thrill-a-minute, Indian superhero, Chakra The Invincible on Humble Bundle, while also supporting two great charities,” said Stan Lee.

To read more about these titles and see the full bundle, head to https://www.humblebundle.com/books.

As with all Humble Bundles, customers can choose how their purchase dollars are allocated, between the developers and charity. Humble Bundle presents Tales From India featuring Grant Morrison & Stan Lee supports Worldreader and Doctors Without Borders/Médecins Sans Frontières (MSF).

Sharad Devarajan, Co-Founder & CEO of Graphic India added, “Humble Bundle is the perfect partner to help us launch these exciting e-books from Grant Morrison and Stan Lee and bring together audiences from east and west to experience India in a whole new way.”

About Humble Bundle
Humble Bundle sells digital content through its pay-what-you-want bundle promotions and the Humble Store. When purchasing a bundle, customers choose how much they want to pay and decide where their money goes — between the content creators, charity, and Humble Bundle. Since the company’s launch in 2010, Humble Bundle has raised more than $60 million through the support of its community for a wide range of charities, providing aid for people across the world. For more information, please visit https://www.humblebundle.com

Graphic believes that India is home to some of the most creative talent in the world, with more than 500 million people under the age of 25 and more than 850 million mobile phone users in the country. The Company’s mission is to create enduring stories and heroes that foster the imaginations and fuel the inspirations of a new globalized generation of youth in both India and around the world. www.GraphicIndia.com

About Worldreader
Creating a Literate World. Literacy is transformative: it increases earning potential, decreases inequality, improves health outcomes and breaks the cycle of poverty (UNESCO). Yet there are 740 million illiterate people in this world and 250 million children of primary school age who lack basic reading and writing skills (UNESCO). Books are necessary for the development of these skills, and still 50% of schools in Africa have few or no books at all (SACMEQ II). Worldreader is on a mission to bring digital books to every child and her family, so that they can improve their lives. https://www.worldreader.org