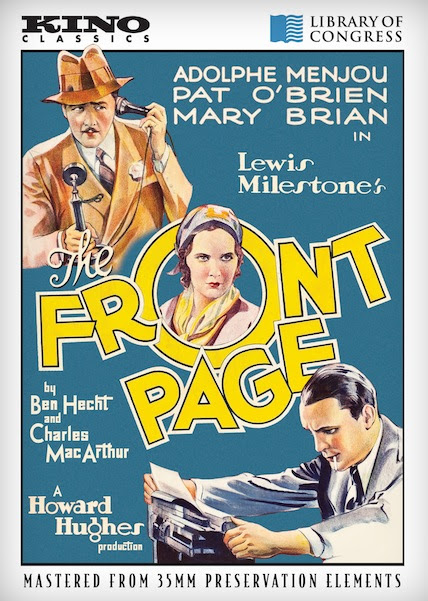 The original film version of Ben Hecht and Charles MacArthur’s hit satire of the newspaper business comes to Blu-ray and DVD on August 11, newly mastered in HD from 35mm elements preserved by the Library of Congress, and packed with special features including a short documentary, audio commentary, and radio adaptations 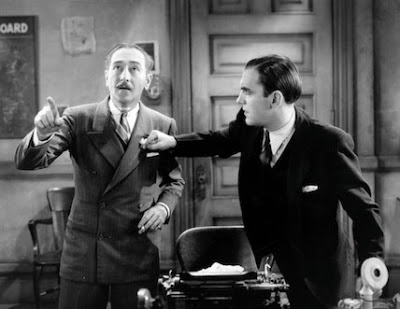 Kino Lorber proudly announces the Blu-ray and DVD release of THE FRONT PAGE, Ben Hecht and Charles MacArthur’s hardboiled satire of the newspaper world about an ace reporter who wants to quit the business to settle down and marry his girlfriend, and his opportunistic editor who will go to any lengths to get him to stay.

Based on the hit 1928 Broadway play, and twice remade (by Howard Hawks in 1940 as His Girl Friday, and by Billy Wilder in 1974), this fast-paced farce was the prototype for the classic screwball comedies to follow.

Directed by Academy Award-winning filmmaker Lewis Milestone (All Quiet on the Western Front) and produced by Howard Hughes (Hell’s Angels, Scarface), THE FRONT PAGE is also a landmark early sound film and a classic of the Pre-Code era, packed with risqué humor and dialogue.

Long available only in poor-quality, public domain copies, this new edition from Kino Classics is newly mastered in HD from 35mm elements preserved by the Library of Congress. Set to street on August 11th with a SRP of $29.95 for the Blu-ray and $19.95 for the DVD, THE FRONT PAGE comes packed with bonus features, including a short documentary on the film preservation efforts of the Library of Congress, audio commentary by film historian Bret Wood, the 1937 radio adaptation starring Walter Winchell and presented by Cecil B. DeMille (60 min.), and the 1946 radio adaptation starring Adolphe Menjou and Pat O’Brien (30 min.) 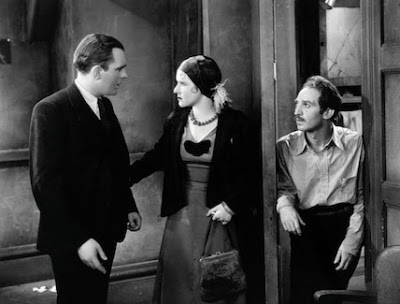 Based on the wildly successful (and controversial) play by Ben Hecht and Charles MacArthur, THE FRONT PAGE follows hard-boiled crime reporter Hildy Johnson (Pat O’Brien) who has vowed to quit the business and marry his new sweetheart (Mary Brian).

But when a political radical (George E. Stone) escapes from custody on the eve of his hanging, the reporter’s room is plunged into comedic chaos, and Hildy’s brash editor (Menjou) sees it as an opportunity to manipulate the reporter into staying.

Raucous, irreverent, and remarkably funny, THE FRONT PAGE is a landmark in cinema history – a brilliantly orchestrated, high-speed satire that set the standard for the countless screwball comedies that followed in its wake.

But few films can match the risqué flavor and the relentless pace of the masterpiece that spawned an entire genre, earning Academy Award nominations for Best Picture, Best Actor (Adolphe Menjou), and Best Director (Lewis Milestone), as well as a spot on the esteemed National Film Registry.