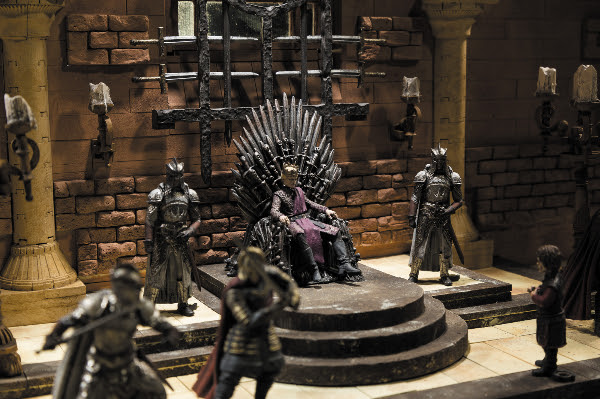 McFarlane Toys, in partnership with HBO Global Licensing, announced today a new licensing agreement to bring the global television phenomenon Game of Thrones to the construction toy aisles this Fall 2015.

Todd McFarlane, CEO and founder of McFarlane Toys, said, “I’m very excited to work with HBO. They are a world-class network and Game of Thrones is one of the most visually compelling shows that I’ve ever seen.”

“We’re thrilled to have the opportunity to create high-quality collectible construction sets based on this fan-favorite property. Both collectors and fans of this epic series can build their favorite scenes with this new product line,” McFarlane added.

Each Game of Thrones construction set will feature iconic environments with realistic sculpted pieces, along with multiple figures of fan-favorite characters.

McFarlane Toys will be unveiling the first look of this new product line, including the legendary Game of Thrones Iron Throne Room and Mother of Dragons construction sets, at International San Diego Comic-Con from July 8-12 at booth #2729.

The launch of Game of Thrones construction line will feature construction sets, expansion packs, and figure blind bags for fans ranging in price from $3.99 to $49.99 and will start hitting stores shelves in November 2015.

Construction Sets: MSRP $14.99-49.99 – Depicting the most outstanding moments from your Game of Thrones, including the Iron Throne Room, Mother of Dragons and Attack on the Wall, each set includes scene specific characters, stunning details and realistic accessories.

In this article:Collectibles/Merchandise, Game of Thrones, Press Release, Toys/Games