Here at FOG! HQ lots of cool stuff comes in, giving us the opportunity to check out some merchandise.  Here’s our thoughts on some of the latest stuff that’s passed through our rigorous testing.

A few years from now the only Doctor Strange shirts you’re going be able to find will have the British mug of Benedict Cumberbatch wearing a Cloak of Levitation and rocking the Eye of Agamotto.

Fortunately, it’s not too late to get this amazing shirt featuring the Sorcerer Supreme fighting off Hoary Hordes of Hoggoth.

With art (I think) by the iconic Frank Brunner, the Master of The Mystic Arts is poised to save us from whatever threats lurk in the multi-dimensional astral planes.

This shirt comes in 100% cotton and is simply Marvelous (see what I did there?) 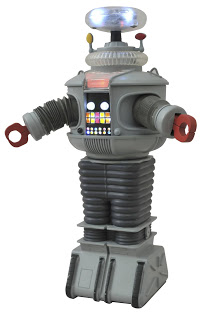 One of the most recognizable robots in pop culture, Lost in Space‘s B9 Robot aka Robot has arrived from DST in an electronic robot edition.

Standing 10″ tall, it’s a near perfect replica of the television icon and features working blinking lights on it’s chest and head and additional lights and sound clips are activated with the press of a button.  Wheels on the bottom of the base allow the robot to be rolled around.

Featuring voice clips from the voice of Dick Tufeld, Robot says the following phrases: “I will accompany you, you may need protection,” “Cannot compute, programming data insufficient,” and it’s catchphrase, “Danger! Danger!”

His head can be manually raised and lowered, his claws can be open and closed and turn his torso from side to side.

A must have for any pop culture connoisseur.

As everyone knows, Chewbacca is my absolutely favorite character in the Star Wars mythos and one of the things I appreciate most about the walking carpet is that he’s got a great sense of humor.

As his sidekick, Han Solo retorts “Laugh it up, fuzzball” after a giggle fest during his bickering with Princess Leia in The Empire Strikes Back, this shirt depicts The Millennium Falcon co-pilot getting his smile on.

This 100% cotton shirt is softer than a blanket made out of Wookiee hair and really is a must have for any fan of the mighty Chewbacca.

Do you honestly think that The Joker simply rolls out of bed and starts killing?  It takes an awful lot of work to look that crazy.

This shirt depicts Batman’s greatest nemesis looking back at his hand mirror’s reflection as he applies his lipstick.

For those confused by shockingly disturbing looking skin, I’m proud to say this wasn’t the result of a Botox treatment gone wrong.

Instead, it’s the result of The Joker trying his best to reattach his face after having it cut off and removed.

Who says comics aren’t for kids?

On the bright side, he’s never stopped smiling…

Growing up, action figures were referred to as “dolls,” but back then they were aimed strictly for a child audience.

Times certainly have changed as now figures primarily are designed for the collector’s market.

One of the classic members of Batman’s rogues gallery, Selina Kyle toes the line between good and evil as Catwoman.  Based on designs by current Batman series artist Greg Capullo, the Designer Series figure of Catwoman truly is a sight to behold.

Standing 6.5″ tall, this sculpted figure comes armed with her trademark bullwhip and outfitted in her stealthy leather outfit and goggles.

The only thing missing from this femme fatale figure is a cat curled up at her ankles.

This fantastic little device is an essential addition to any person/family that charges more than one device at night. Plugging directly into the wall, this provides a high-speed charge by internally identifying the device plugged into it and charging the individual USB device, smartphones and tablets appropriately. In addition, the device utilizes a series of sophisticated protection features. The rapid charger cannot draw too much power, overheat or harm your device in any way.   The Arctic Smart Charger 8000 has the ability to charge up to 5 units at the same time, instantly making this an indispensable purchase to anyone utilizing USB devices of any kind regularly. 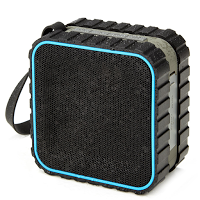 This versatile waterproof speaker is ideal for use both poolside and inside the shower.

Featuring a tire tread-inspired rubber exterior and splash resistant shell, this Bluetooth enabled USB 3.0 speaker boasts crystal clear treble and amazingly deep bass and comes with a rubber lanyard for use to hang it in a shower or outdoors.

Featuring a rechargable in-built battery, the speaker up to 4 hours of music per recharge (via the provided Micro USB cable). A must have, the Arctic Smart Charger 8000 takes the worry out of the technology and lets you enjoy the experience (and the music). 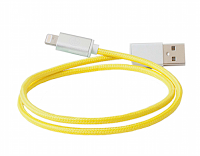 The cable is 18″ long and the bright yellow color does a great job of setting itself apart from other cables that you regularly use.

A fantastic accessory for any iPhone/iPad owner. 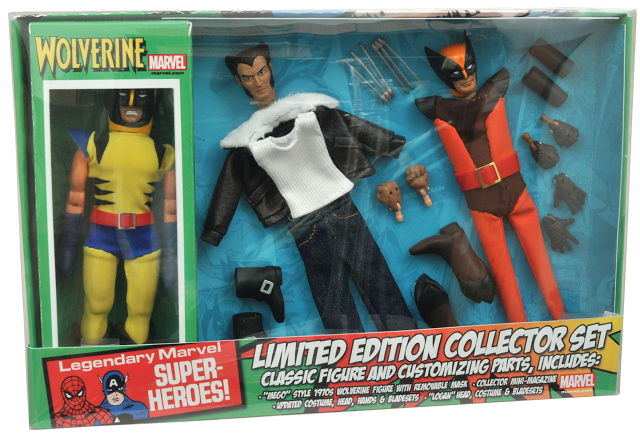 This set represents the first time that DST has released an actor figure not originally part of the MEGO line. And to be honest, it’s pretty darn neat.

I’ve mentioned before that these figures seem slightly smaller than the MEGO figures, and I almost wish that this figure was even smaller (The comic book Wolverine is a runt at 5′ 3″) and features the character in his original yellow costume and a variant outfit of his brown costume and a secret identity version. Personally I wish they had included his original mask from Hulk #181 as well, but what is included is pretty neat.

Unfortunately, they can’t include all of the accessories on my wish list, but I would have liked to have seen a kimono and sword, a six pack of beer and perhaps a cowboy hat. The yellow mask fits a little awkwardly (though you can actually put it on over Logan’s head), but overall it’s pretty impressive. This is not a kid’s toy (if the price wasn’t already an indicator), but if you’re a fan of Megos, Marvel, or Wolverine, you will in no way be disappointed. The packaging is sturdy, but as I was informed from my previous review, an X-Acto knife can remove the figures and accessories cleanly and the included magazine is both informative and entertaining.

DST have already announced Thor as a follow up, and I’m hoping future figures might include Ant-Man (with Hank Pym and Yellowjacket accessories), Captain Marvel (with Kree, Mar-Vell and Rick Jones versions), and Dardevil (with Matt Murdock, red, and red/yellow costumes).

Lost in Space Dr. Smith and B9 Robot Minimates 2-Pack

From one of television’s most iconic science fiction television series, Lost in Space, comes the Minimate incarnation of the famous Robot B-9 and the morality challenged Dr. Zachary Smith (portrayed by the inimitable Jonathan Harris).  The set features several interchangeable parts and accessories (for Dr. Smith) including a ray gun and three variant heads, each capturing a different expression of the Jupiter 2 stowaway.

Once again, assistance comes from the Class M-3 Model B9 General Utility Non-Theorizing Environmental Control Robot, the most important piece of equipment on the Jupiter 2 mission.

This 4-inch sculpted metal opener has magnets on the back, so it will stay on your refrigerator or lunar module until you’re in danger of getting thirsty!

A must have for any Lost in Space fan who likes to cool his overheated sensors with a cold beverage.