The original tagline for 1978’s The Manitou went something like this…Evil Does Not Die…It Waits To Be Re-born. But I’m thinking….

“The new film from the director of the Jaws ripoff, Grizzly, comes a horror, space odyssey, Native American, love story kind of thing with Tony Curtis.”

Karen Tandy (Susan Strasberg) has something or someone growing in her neck and it’s up to a team of doctors, her carny fortune telling lover/friend (Tony Curtis) and shaman, Johnny Singing Rock (Michael Ansara) to save her! 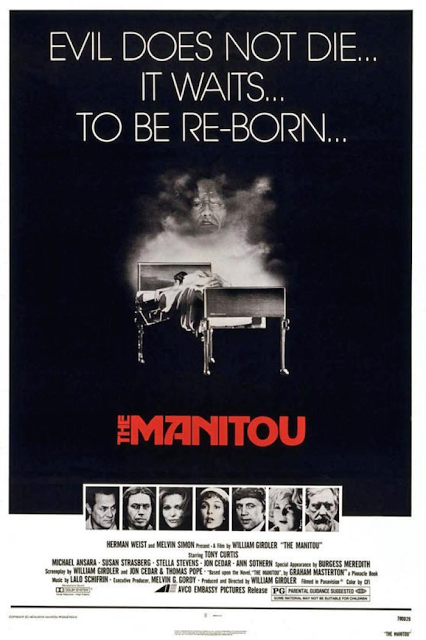 Still swimming in the wake of The Exorcist, which unfortunately was responsible for an endless sea of Satanic-possession horror film clones from The Omen onward, is The Manitou an almost inconceivably bad film that attempts to cash in on so many popular 1970s film genres at once, you begin to lose track about midway through the plot.

Our victim, Karen Tandy, lives in San Francisco, is kind of cute, and has a huge lump on her neck that could be cancerous but cancers rarely have their own heart and lungs. This baffles our crack team of doctors and they plan on operating immediately but not before allowing Karen to wander around the cable car town like an old Rice-A-Roni ad for a couple of days first. She descends on the The Munsters-esque apartment of Harry Erskine (Curtis), a Tarot Card reader and amateur psychic who spends the bulk of his days bilking old ladies out of their inheritance. Karen turns to our still adorable Harry for help and a bit of slap and tickle as she needs to know why she has a fetus gestating in her gullet.

Harry consults the cards and pulls the “death card” (which you know in Tarot terms doesn’t mean actual “death) but lies to Karen anyway to calm her and perhaps loosen her panties up a bit. They tango and while she sleeps off her bed romp, Karen utters the phrase “Pana Wichy Saratoo” which sounds all mystical, so that springs our Harry into action as a paranormal investigator.

Meanwhile in the surgical theater, traditional medical science fails, as the neck fetus begins to control the hands of our surgeon, making him cut into himself. This is no normal neck fetus here, this thing has all kinds of mojojojo, and now our doctor must consult his super computer for answers. Back in the mystical realm, Harry has now gone off to see out mediums to séance the hell out of Karen’s neck to get her all OK again, but of course that fails as well. So while Karen lies in her hospital bed, the lump has grown into the size of a Billy Barty midget and is looking for a ripping exit.

Frustrated, Harry gets the tip from another carny reject (played by a post-Rocky Burgess Meredith) that “Pana Wichy Saratoo” is Native American for “thing that lives in white woman” (actually “my death foretells my return”), and so Harry is off to the reservation to get himself the best Native American shaman that money can buy, and that shaman is Johnny Singing Rock. Johnny warns Harry that the “Evil One” is coming and that nothing in his white man world will stop him, so Harry offers Johnny a monster load of cash to leave the reservation and battle the creature living in his maybe girlfriend’s neck. But they might be too late; as they head towards the hospital, the big moment occurs, and at least thirty percent of the special effects budget goes ripping out of Karen’s back and thus, the Misquamacus, is born.

It is an ugly looking spud, and when Johnny gets a good look at him, well he’s pretty sure that the tiny terror will kill them all.

What follows is a rapid blending of genres that goes so quickly that if you can stop giggling for a moment, you will see about four or five of them speed by your bewildered eyes.

You get the hospital drama of course, but for a bonus you also get an Exorcist-like” de-possession ritual, the downtrodden Native American soliloquy to evoke white man’s shame a la Soldier Blue, and an all-out Star-Wars laser battle between the “Manitou” (the spiritual and fundamental life force understood by Algonquian groups of Native Americans which this film reduces into more Star Wars gimmickry) of the white man’s technology and Misquamamcus in space no less.

This final fight scene is all so impressive as it seems that some producer who must have really appreciated Girdler’s Grizzly sank some real bucks into the final showdown.

Somewhere lost in this of course is the fact that the white man, triumphs over the Native American again and at the end we are supposed to bask in the joy of Tony and Karen sharing a cuddle while the savage’s spirit dies another death.

After a career of directing some pretty awful knockoffs and even a blackploitation film (Pam Grier’s Sheba, Baby), The Manitou thankfully became Girdler’s final film.

At least with The Manitou he can say that he directed a film in almost every genre.