Less than a year after Mickey Mouse’s debut in Steamboat Willie, the Walt Disney Studio embarked on a decade-long series of music-driven shorts whose breakthroughs would forever change the direction of animation and would have a massive impact on popular culture. The 75 cartoons – called Silly Symphonies – pioneered “three-strip” Technicolor, introduced Donald Duck, and created a pop music phenomenon with “Who’s Afraid of the Big Bad Wolf?” They won seven Academy Awards® for Best Short Subject (Cartoon) between 1932 and 1939.

The Silly Symphony Collection is a first-of-its-kind box set from Walt Disney Records and Fairfax Classics featuring the complete restored soundtracks from all 75 Silly Symphony shorts from 1929-1939, with more than 8 hours of music over 16 vinyl LPs. 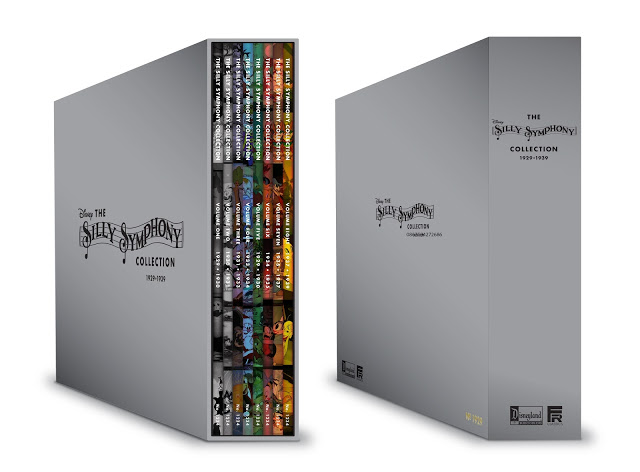 The limited edition collection is housed in 8 tip-on gatefold jackets with original animation art in a beautifully constructed foil-stamped and numbered slipcase. Soundtracks of Disney classics such as The Skeleton Dance by Carl Stalling, Three Little Pigs by Frank Churchill, and Donald Duck’s debut The Wise Little Hen by Leigh Harline will be presented in full for the first time ever on record. Each gatefold jacket includes detailed liner notes for every short by Disney historians J.B. Kaufman and Russell Merritt, authors of the definitive book on the series, Walt Disney’s Silly Symphonies: A Companion to the Classic Cartoon Series.

Kaufman adds, “It’s well known that the Silly Symphonies were built around music, but most of us can’t watch the films without being distracted by the visuals. This set is a brilliant idea, isolating the sound so that we can appreciate, for the first time, just how good the music is. I think it will change the way people look at these classic cartoons.”

Pre-order for the box set will begin at D23 EXPO: The Ultimate Disney Fan Event, August 14th through August 16th, 2015 in Anaheim, California, and will continue online at Disney Music Emporium (www.sillysymphonycollection.com) on August 17th at 8:00 am PDT.  Pre-orders will ship to arrive in time for the holidays.

J.B. Kaufman and Russell Merritt, along with Restoration Producer Randy Thornton will be on hand at D23 EXPO 2015 signing The Silly Symphony Collection 10” single on Friday, August 14th and Sunday, August 16th.

A set of 3 limited edition Silly Symphony postcards are being handed out in various locations throughout the D23 EXPO 2015 and fans can follow Fairfax Classics on Twitter (@fairfaxclassics) to find out how to obtain them.