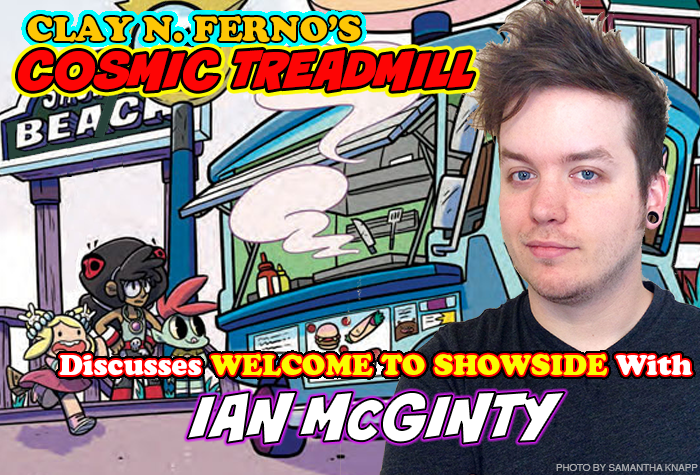 Today Ian talks to us about his new book for Z2, Welcome to Showside, Hank’s roll in voicing the pilot for Showside and introduces the heart attack-inducing Mallo-Butter-Waffles.

Who said bubble-gum pop with a hint of punk edge should be relegated to the turntable?

Looks like we have a sticky cotton candy comic book in the world of Welcome to Showside hitting shelves in October.

FOG!: Ian, thanks for joining us today! We know you are probably super busy! Are you working on a ton of books at the moment or just concentrating on Welcome to Showside?

Some I can’t talk about right now, but the ones I can include Steven Universe, Munchkin, FLUXX and, of course, Bravest Warriors.

Added on to that is my own book, Welcome to Showside, so it’s been quite a month, to say the least, but wow, what a rad month.

Thankfully, I’m someone who thrives on being busy and I love juggling all the different characters/storylines.

It’s weirdly invigorating to switch from having to be strictly on-model for some projects and then getting to go crazy with my own stuff, so I’m having a blast, and I’m definitely most excited about Welcome to Showside coming out soon.

I just love drawing and creating, so it’s been extremely fun overall.

What is the pitch for Welcome to Showside? The pages looked really fun!

Thank you! I’ve pitched Welcome to Showside as “Hellboy meets Steven Universe/Adventure Time”. I’m a horror buff, and I’ve always wanted to channel that into an all-ages comic that was a little more unique than, say, something along the lines of old EC comics. I wanted Welcome to Showside to be cute, fun, funny and dark.

More-so, Welcome to Showside addresses issue of legacy, specifically, within the main characters’ families. Kit, a monster boy, doesn’t want to ascend the throne as laid out by his father, the Great Shadow King, essentially a Cthulhu-like force of destruction. He wants to hang with his buds and go on adventures, he likes the world and he likes humans.

Moon, a sorceress-in- training, contends with living up to her famous grandmother and making a name for herself while, Belle, the youngest daughter in a long line of monster hunters, has to hide her friendship with Kit and other demons from her family for fear of rejection or exclusion.

So, yeah, there are some heavier themes here while still having a lot of fun with a horror twist.

Z2 is expanding into regular floppy comics, a world you are familiar with. How is it you came to work with Z2 Comics?

I’d been introduced to Josh Frankel, founder of Z2, when they were still Zip Comics at New York Comic Con in 2013.

Josh and I sort of talked off and on, mostly about David Chang and restaurants, but one day out of the blue he asked me to pitch something. For a guy who’s worked for as much licensed stuff as I have, that question doesn’t happen often, so I made up something on the spot for fear of losing the opportunity. Come to find out Zip was rebranding as Z2 with the partnership of Sridhar Reddy of Modern Prometheus productions, a name I knew, and they liked my idea.

Over about a year I shaped and formed the concept into Welcome to Showside, which was lucky enough to be the first real series from Z2. I was given absolute freedom in that, and the company treated me very, very well, and still do. 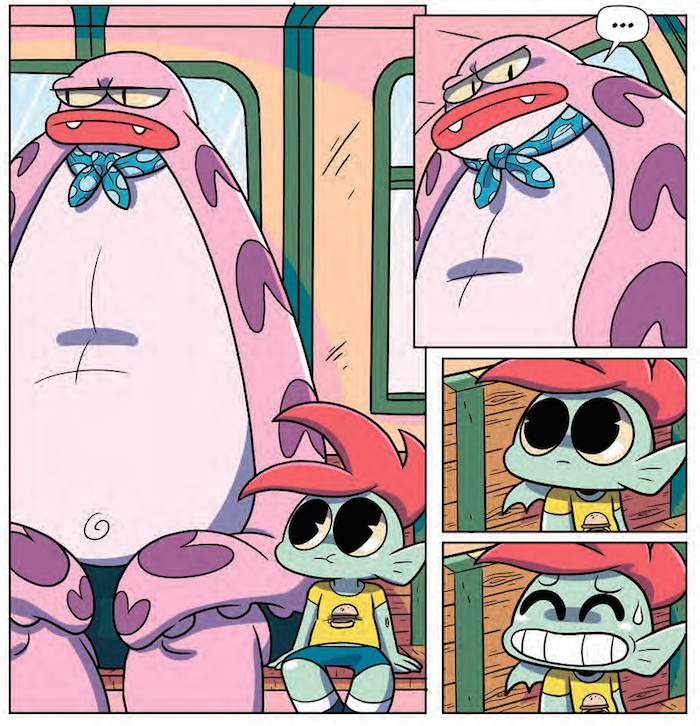 An even crazier thing was when they wanted to create a pilot episode of Welcome to Showside, which we are developing as we speak. It’s been extremely fun and the team is just fantastic, everything is just rad as heck.

This is a creator-owned line, and that can be important for a creator of kids’ comics and properties. How is it going with bringing Welcome to Showside onto the small screen?

Definitely. Like I said, we are producing a short pilot for Welcome to Showside, in hope that we could go to a full animated television series. There’s a lot going on in the world of Welcome to Showside, and it was important for me to take the concept of an all-ages comic and properly translate it into an animation.

Welcome to Showside is for everyone, is LGBQT-friendly, features kick-ass characters, boy, girl, monster, whatever, and I’m extremely proud of the animators and voice actors involved. The reception of the pilot so far has been, to say the least, amazing. I hope more and more people will get to watch Welcome to Showside.

How do you get the singer for Black Flag, Henry Rollins, to get involved with a kid’s animation?

Ha, a lot of swirling elements finally came together for us and, boom, we had Henry Rollins with a script in his hand.

He really loved the character I wanted him to voice, Frank, and he was very into the script and had a lot of fun voicing characters on shows like Avatar, so we lucked out and managed to get him in the studio.

Without Henry Rollins, that character and a lot of aspects of the pilot wouldn’t be as good, so I’m eternally grateful and flattered Henry wanted to do this. He’s a really kind and generous guy and we just had a blast.

What have been some of the challenges you’ve faced working on in all ages comics? Is it easier for you to voice these characters or to draw them? Maybe you like both!

The biggest challenge of working in all-ages comics has never been anything like, say, being limited by the demographic or content of the comic.

For me, it’s more-so been the other artists and editors who primarily work with comics aimed at older audiences not take me seriously as a creator.

Just because I’ve been drawing Catbug for 2 years doesn’t mean I don’t know what makes a rockin’ story, or how to draw some cool stuff. And trust me, it’s not easy to get an all- ages comic off the ground, it’s a discerning and smart crowd willing to take a chance on something entirely new.

I do enjoy both aspects of the characters, for sure, but they go hand in hand now. After voicing Kit, and hearing the other actors create voices for different characters, it’s made it much easier to draw everyone in the comic. It makes writing especially easier since I can hear everyone in my head.

I will say, though, I love voice acting a whole lot and I’m looking to do more of it.

If you could invent a skateboard trick for Welcome to Showside and have it be truly yours, what would you name it?

It would be the ‘Kickflip to Let’s Put Down the Skateboards and Go Visit the Cheap Sushi Bar Down The Street’ — ‘cause that was always my excuse for skateboarding anyways.

Anything else you want to tell us? Are waffle tacos a real thing?

Waffle tacos are real but they’re mostly a breakfast thing.   The true original Welcome to Showside treat is Mallo-Butter-Waffles, which are waffles with marshmallow fluff in the middle and covered in butter.

Belle and Boo the Floating Squid love them, but Moon and Kit hate them, which is probably a pretty accurate representation of the populace that would actually consume something like that. 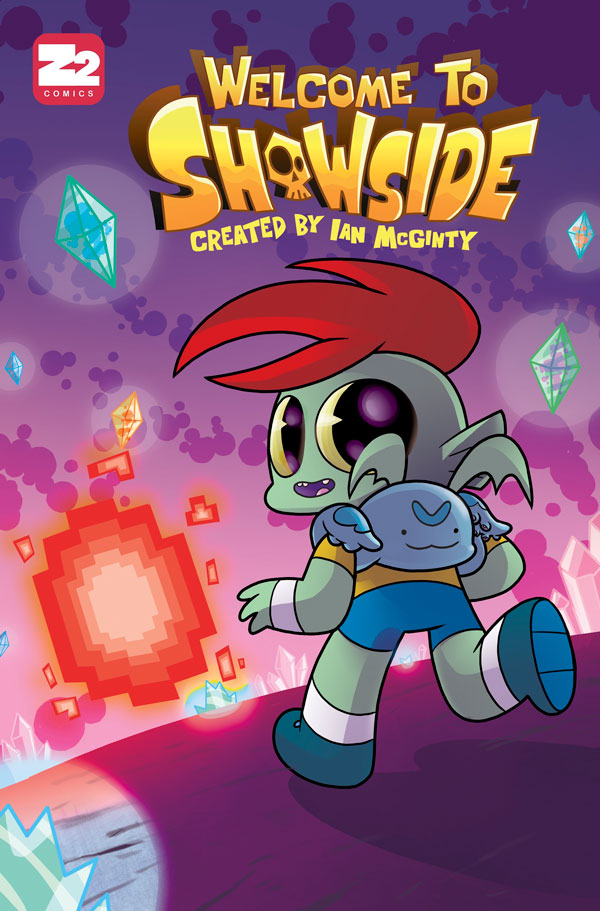