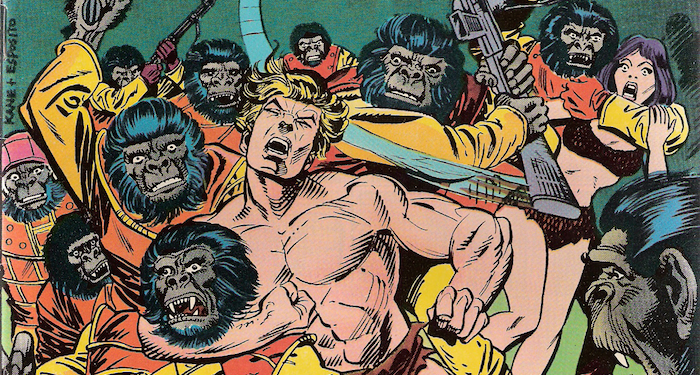 Sequart Organization is proud to announce the publication of The Sacred Scrolls: Comics on the Planet of the Apes, edited by Rich Handley and Joseph F. Berenato.

Since the 1970s, the Planet of the Apes franchise has frequently delved into the world of comics. Some stories have made the Lawgiver proud, while others have brought shame to Ape City. In the comics arena, not all apes are created equal — but for fans, that’s half the fun of reading them.

More than 150 POTA comics have been published during the past four decades, from Gold Key, Marvel, Power Records, Brown Watson Books, Editorial Mo. Pa. Sa., Malibu Graphics, Dark Horse, Mr. Comics, and BOOM! Studios. Writers have explored the settings, concepts, and characters from the films (and occasionally the TV series), while introducing an array of new characters and scenarios. Back stories have been revealed, plot holes filled in, and histories extrapolated upon. The comics have employed multiple genres and styles, taking readers to distant villages, ruined cities, and oceanic civilizations — and we’ve even seen the Apes battle alien invaders from War of the Worlds and Alien Nation. It’s been quite the madhouse, to be sure. But by and large, the Apes comics have remained true to creator Pierre Boulle’s simian spirit. 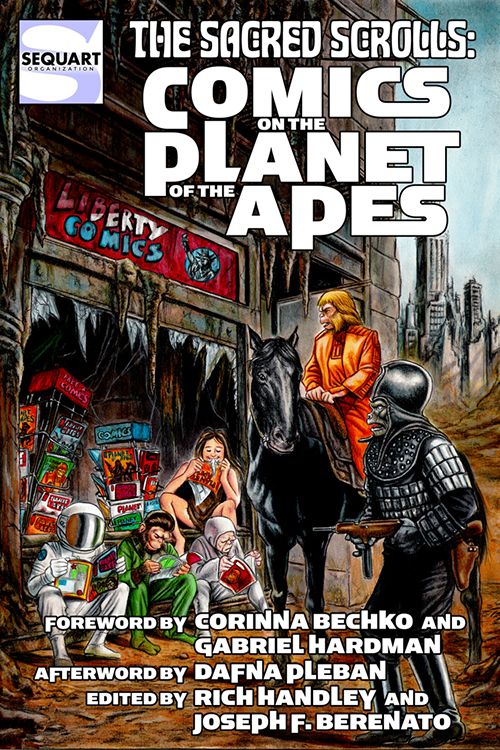 The Sacred Scrolls: Comics on the Planet of the Apes examines this history with an essay anthology that features insightful analysis from comics historians, novelists, bloggers and Apes experts. If you’re eager to learn more about Apes lore, then you’ll need to get your stinkin’ paws on this volume. (See attached for the book’s table of contents and cover.)

The Sacred Scrolls runs 312 pages and is available in print and on Kindle. (FYI: you don’t need a Kindle device to read Kindle-formatted books; you can download a free Kindle reader / app for most computers, phones, and tablets.)

About the Publisher
Sequart Organization is devoted to the study of popular culture and the promotion of comic books as a legitimate art form. Sequart has released twenty-four books, six documentaries, and thousands of online articles. Its documentaries include She Makes Comics, and its books include Our Sentence is Up: Seeing Grant Morrison’s The Invisibles. Sequart is currently producing a documentary on writing powerhouse Neil Gaiman.