Today’s Triple Shot cheats the numbers a bit to include the latest two issues of Rucka’s Stumptown as the meat surrounded by Jeremy Haun’s incredible debut of The Beauty at Image and the ‘most likely to succeed’ crossover Star Trek/Green Lantern #2 putting Lantern Rings on all the right crew members.

Be sure to treat your LCS like your favorite place to be this Wednesday, because it probably is.

Unless you are like me, of course, reading on my iPad behind closed doors like some malnourished shut-in. 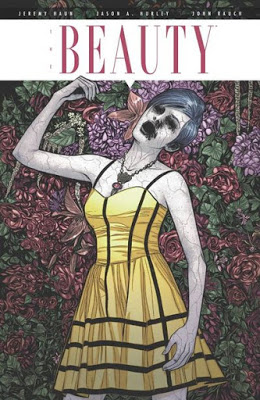 Previous winner of Top Cow’s Pilot Season 2011 is Jeremy Haun’s The Beauty. My prediction is that this will end up at the top of lots of people’s stacks this week.

The premise is simple and deadly. There is a disease, ‘The Beauty’ that makes you look amazing but has a major side effect, a chronic fever.

At the opening of the book, it appears that the symptoms have grown more severe and these good-lookin’ folk will start dropping like flies.

Part X-Files, Part Chew, part The Killing, this self described sci-fi police procedural takes an alternate world view or problem (see Chew) and wraps it around gumshoe detective work and departments stepping on each other’s toes.

Many contagions are not obvious to the beholder, but the attractiveness of a symmetrical human form is for all to see. What makes this STD especially deadly is that people want to get it, not matter what the long term effects can be.

Haun and Hurley are able to explore classism, narcissism and vain behavior through the lens of your buddy cop tropes and a uniquely terrifying prospect.

Beautiful people dying next to you on the subway? What can be scarier than that? I’d rather take my chances with Rick and the rest in that zombie book.

Cheers to Jeremy Haun (Batwoman) for making a huge leap from the drawing board to the typewriter and back to the art again. This is absolutely great storytelling on the page and from the minds of Haun and his co-writer Jason A. Hurley.

I may grab a couple copies of this one at the store. 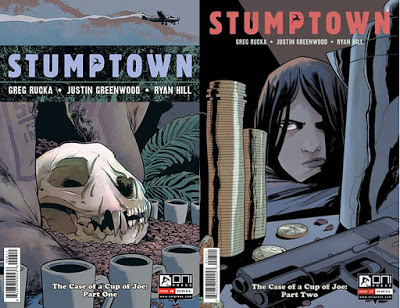 You know that cat-shit coffee? You don’t? Kopi Luwak aka civet coffee is make from partially digested coffee cherries “eaten and defecated by the Asian palm civet”. Cat. Shit. Coffee.

Guess what? Its amazing. Its also a real thing, not made up for the sake of the comic book page.

Leave it to Portland’s Greg Rucka to take the cherries and run with them in the latest installment of Stumptown.

Portlanders are as snobby as they can be about their barista-tude and cappuccino art so OF COURSE this is what’s now happening to Dex.

For those not familiar with Dex and Stumptown, think of this as the modern day PDX Rockford Files.

Dex is the young female detective battling her own demons and taking care of her autistic brother.

When someone tells her of the civet coffee and that there is a shipment coming in that Dex must protect, she gets a whiff of something worse than spoiled cream. Every rich bastard in the world wants this stuff, and over the course of these two issues they get damn close to intercepting the prized beans.

Once again, Stumptown brings us into a crime story weaved intricately from master of such comics Greg Rucka. Justin Greenwood (The Fuse) rejoins Greg on art and Ryan Hill sets the mood with flat and understated colors that put you in the world of the Pacific Northwest. I’ll be looking forward to the conclusion of The Case of the Cup of Joe! 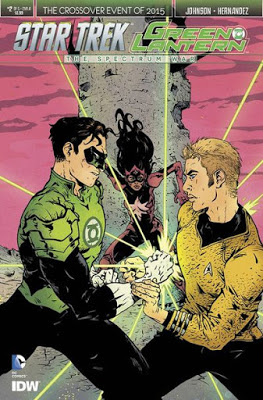 GAH! Sometimes you can’t even deal with something with a title like this, you not only want to dismiss it, you want to throw it out of the airlock on principle. Come ON! This is either going to be really awesome or really terrible.

I rolled the dice on Issue #1. Considering that I heard good things about Star Trek/Legion of Superheroes and Star Trek: The Next Generation/Doctor Who: Assimilation, I thought I could at least give this a shot.

The first issue introduces the many colored rings of recent Green Lantern lore to the bridge of the Enterprise and introduces Hal Jordan. This second issue is followup as we see a Yellow Ring has taken over a Klingon. That can’t be good!

I should also mention this is set in the current Chris Pine as Kirk multiverse, and the previous two crossover volumes starred Shatner and Stewart as The Captains.

To balance out the power, in true Blackest Night fashion, Chekov takes on Blue (hope) and Uhura gets the Star Sapphire Violet (love) ring.

Find out how the other colors are dispersed among the crew and also marvel at how Hal’s constructs can pull the Enterprise out of a jam in this so-crazy-it-works-so-well inter-company IP crossover that demands your attention.

“Lantern on the Bridge”!