One of the more fun, less creepy experiences I had while working on my book Monster Hunters was taking a road trip down to Point Pleasant, West Virginia, to attend their annual Mothman Festival.

Mothman is one of my favorite stories of an odd local legend that confused and terrified the locals and beyond.

The bulk of Mothman sightings—dozens and dozens, if not a hundred or more– took place in 1966 and 1967 when frightened residents reported sightings of a grey humanoid with giant wings and glowing red eyes. 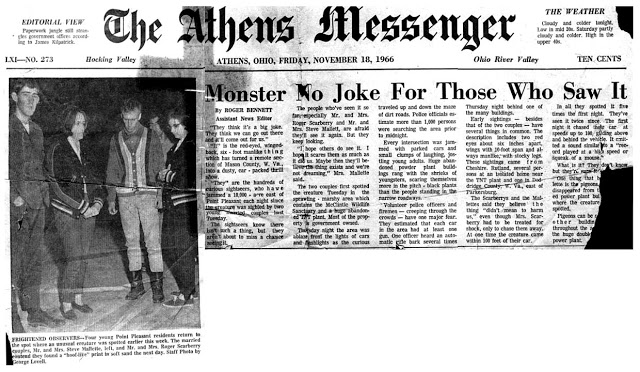 A clever newspaper copywriter soon dubbed it “Mothman.” Other odd things were going on in Point Pleasant in this time period as well: UFOs buzzed the skies and strange Men in Black questioned Point Pleasant residents…what on earth was going on?

The case would go on to be reported by many people, including classic ufologist John Keel, who documented the happenings in his book The Mothman Prophecies. Other books include a couple by Mothman Festival founder Jeff Wamsley (Mothman: Behind the Red Eyes) and one by cryptozoologist Loren Coleman (Mothman and Other Curious Encounters).

Speculation has run wild on what Mothman could be—an extraterrestrial, a supernatural being or agent of Satan, a government experiment gone wrong, or a visitor from another dimension. Skeptics have scoffed at the idea from the beginning, suggesting that the original sightings were of a Sandhill crane or an owl and subsequent Mothman mania was just a triggered mass hallucination.

Whatever it was, many years after terrifying the town, Mothman has made Point Pleasant a tourist destination. A 2002 movie adaptation of The Mothman Prophecies starring Richard Gere helped bring the story back to the masses. Local Jeff Wamsley long had an interest in the case, having lived near an original witness as a kid. While running a local record store, he and a friend developed a website dedicated to Mothman, and designed a t-shirt to sell in their store. 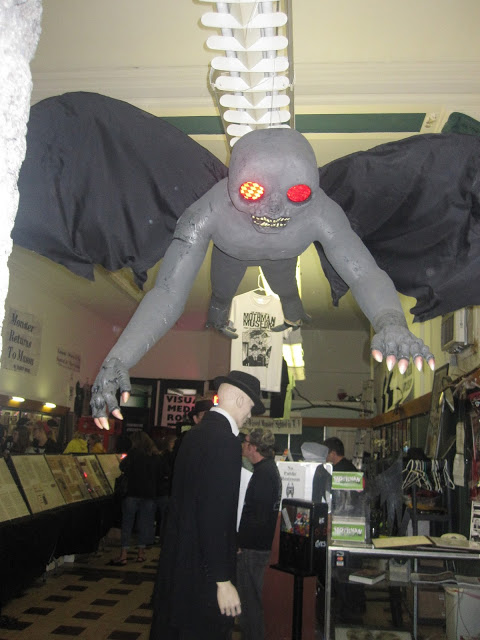 Interest in Mothman and the Mothman Prophecies film on the horizon led him to expand his ideas and he opened a small Mothman Museum, wrote scrapbook style books on the subject, and organizing the Mothman Festival.

The event is a mix of paranormal conference and small town festivity. 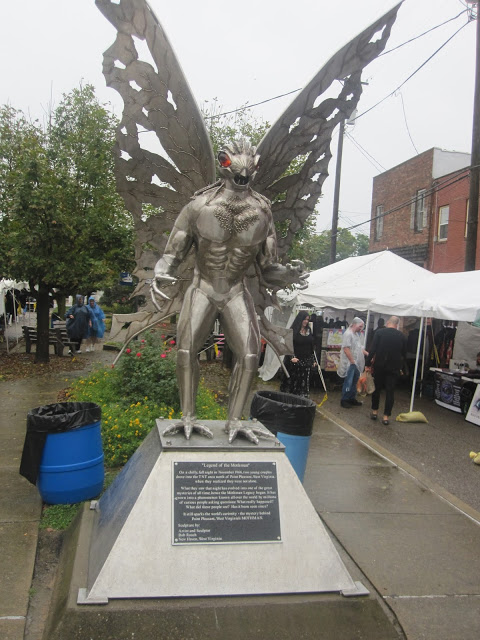 Here’s one of the first things I describe running into at the fest in Monster Hunters:

Arriving in downtown Point Pleasant, one of the first spectacles I ran into was a team of clog dancers who were clacking out a routine to Will Smith’s bouncy hit “Men in Black,” from his action-comedy of the same name. The women were wearing the MIB’s signature black suit coats, ties, and sunglasses, enthusiastically clogging away. Joining them was a bug-eyed, tongue-lolling, tap-happy Mothman.

That was one of just many great people watching moments I had in Point Pleasant. 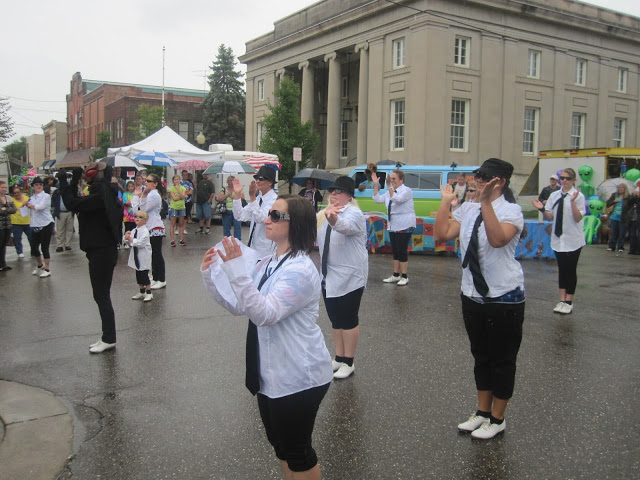 You can get an eyeful yourself at the 14th Annual Mothman Festival, which takes place later this month in downtown Point Pleasant, September 19 and 20. 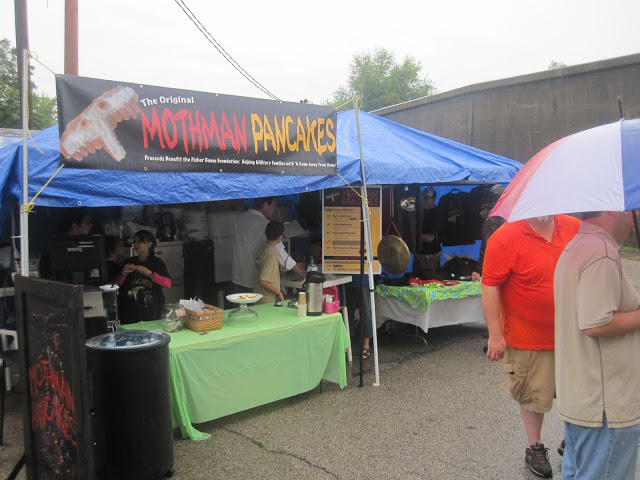 For more information visit MothmanFestival.com
Tea Krulos is the author of Monster Hunters: On the Trail with Ghost Hunters, Bigfooters, Ufologists, and Other Paranormal Investigators (Chicago Review Press). 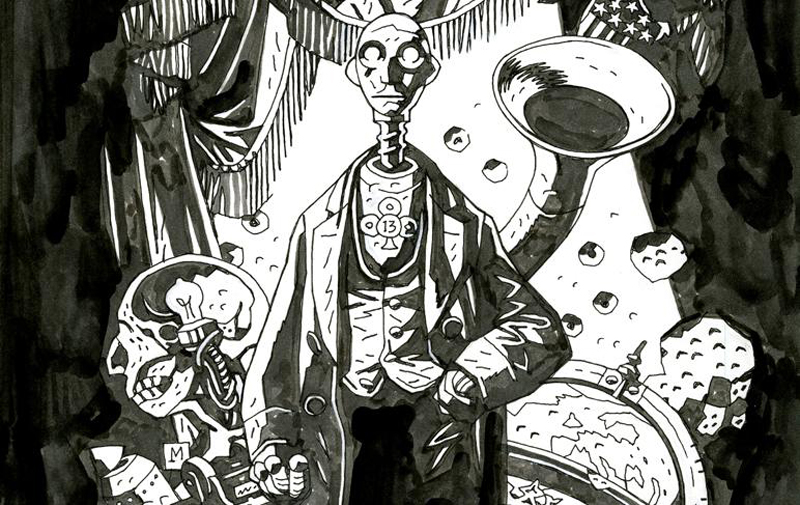 The Society of Illustrators Presents ‘The Art of Mike Mignola: Hellboy and Other Curious Objects’

The Museum of Illustration at The Society of Illustrators presents THE ART OF MIKE MIGNOLA: Hellboy and Other Curious Objects, a selection of works... 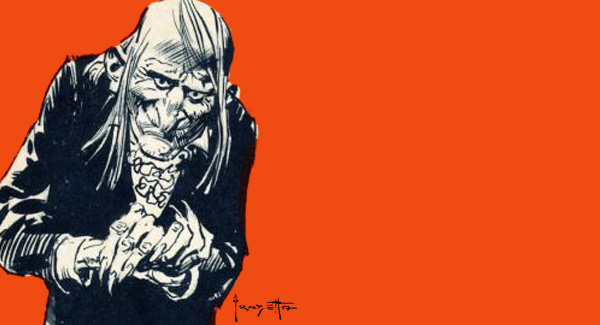 Uncle Creepy Showed Us The Way

The first issue of CREEPY I ever bought from my neighborhood pharmacy featured a Frank Frazetta painting of a giant, bestial warrior, with...