Whether you know him from his many appearances on “The Tonight Show”, his uproarious stand-up, his decades on TV from “The Dick Van Dyke Show” to the ’70s-era Navy sitcom CPO SHARKEY or his turn as Mr. Potato Head in the Toy Story trilogy, Don Rickles is Hollywood royalty. Harkening back to a time, pre-Internet, when celebrities hit it big because of talent, not Twitter, the inimitable Rickles has enjoyed a legendary showbiz career that has touched seven decades and still continues today. This October, Time Life invites home audiences to front row seats for comedy greatness with MR. WARMTH! DON RICKLES: THE ULTIMATE TV COLLECTION, an 8-disc DVD set featuring nearly 20 hours of some of Rickles’ finest on-screen moments.

MR. WARMTH! DON RICKLES: THE ULTIMATE TV COLLECTION captures the legend at the peak of his powers. His four ’70s comedy specials – “The Many Sides of Don Rickles”, “Don Rickles: Alive and Kicking”, “Mr. Warmth” and “Rickles” — show his expansive range of talents, and his pals, from Frank Sinatra to Don Adams join in the barrage of barbs with a gaggle of guest stars. Highlights from the specials include movie spoofs of For Whom the Bell Tolls, Tarzan, Midnight Cowboy and The Ten Commandments, a dramatic performance of a scene from “Inherit The Wind” with Don and Jack Klugman and Don instructing John Wayne in the art of joke telling . Also included are both seasons (37 half-hour episodes) of CPO SHARKEY, previously unavailable on any format until their 2015 DVD release by Time Life. The sitcom gave Rickles a weekly prime-time platform to do what he does best — shoot from the lip – as U.S. Navy Chief Petty Officer Otto Sharkey, an abrasive, sharp-tongued veteran in charge of a company of new seaman recruits on a San Diego naval base. 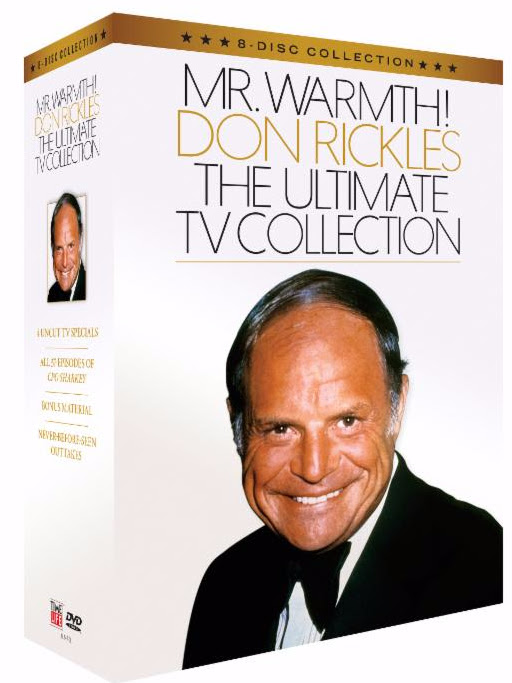 Featuring Don from stem to stern, starring on all three major TV networks, home audiences will see first-hand that while Rickles is spot on with his zingers, he’s far more than a master of comedy… he sings, dances and acts up a storm. No one likes to be put in a box, but it’s great to have Don Rickles in one convenient package with MR. WARMTH! DON RICKLES: THE ULTIMATE TV COLLECTION.