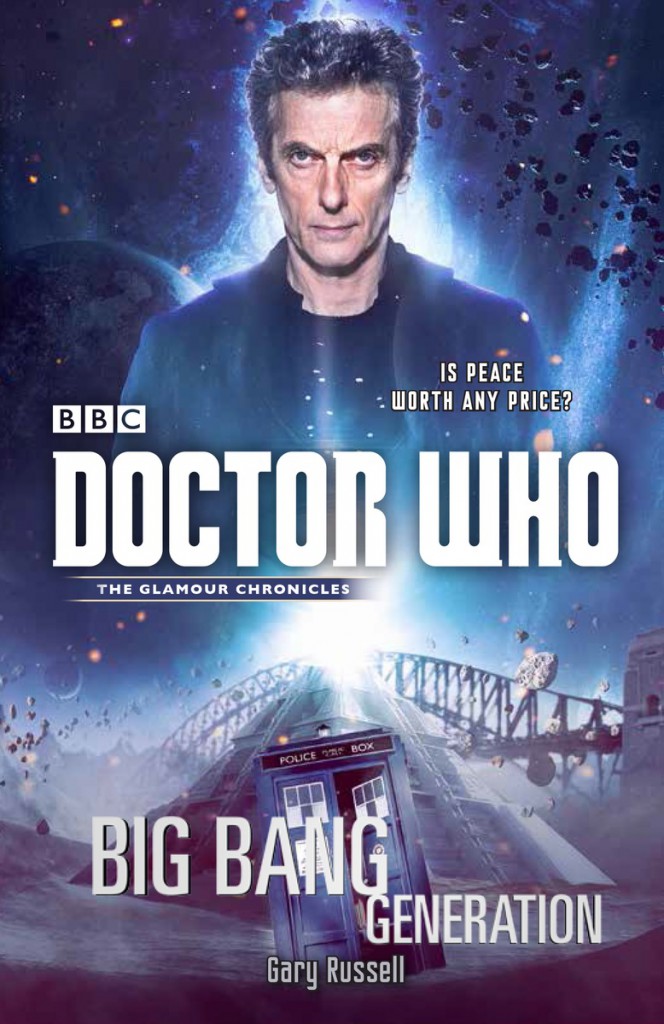 In Doctor Who: Big Bang Generation, the Doctor finds himself leading a crew of misfits—including Legs (the sexy comedian), Dog Boy (the ammunitions expert), Shortie (who handles logistics), and Da Trowel (the excavator and historian)—in an attempt to thwart the theft of a pyramid that recently emerged from a time portal in Sydney Cove. Battling monsters, alien assassins, and con artists alike, the Doctor and his team must protect the glowing pyramid in order to avoid an explosion that would make the Big Bang look inconsequential.

Author Gary Russell has written more than thirty-five fiction and nonfiction books on subjects including Doctor Who, The Lord of the Rings movies, Frasier, and The Simpsons. He has served as editor of Doctor Who magazine, creative producer at Big Finish Productions Ltd, and script editor at BBC Wales. He now works at Planet 55 Studios in Australia.

After the jump check out an excerpt of  Doctor Who: Big Bang Generation available now!

Elsewhere in the universe, things were coming into alignment.

Thousands of years ago, a lump of ordinary-looking rock, threaded through with equally ordinary-looking crystal lattices, fell out of the sky above the planet Earth, hit another piece of rock, did a bit of damage, and got itself buried at the foot of a mountain, observed by a solitary dark-skinned human wearing not very much in the way of clothing bar a small white piece of hide, whose friends hadn’t worked out how to invent a calendar yet.

In the early twentieth century, by which time the planet’s indigenous population had worked out how to make calendars and used them quite frequently, a German amateur archaeologist and his family were getting off a ship at the Port of Sydney, New South Wales, Australia. They had travelled a long way, for a long time, and were not in the best of moods. The man was nervous, always looking over his shoulder. The woman was just angry at everything. The young son was still amused by something that had happened three days previously. He had started an argument with an English child aboard the ship about some toy soldiers die Englander owned and, having lost the argument, proceeded to pick up the victor’s toy soldiers and thrown them overboard, where they rapidly sank to the bottom of the South Pacific.

In London, very early in the twenty-first century, an alien from the planet Kadept who really had no right to be on Earth in this time period (he was from six centuries further on and quite a few galaxies across) licked a postage stamp and stuck it on the back of a postcard showing a massive shopping mall on it then popped the postcard into a red pillar box. He stepped back into the road and got clipped by a black cab. He hopped, quite literally, away, clutching his sore bum and yelling some very explicit Kadeptian curse words at anyone who would listen.

In the twenty-seventh century, a ship from the Pakhar BurrowWorld went far beyond the legitimate frontier worlds and arrived on the degenerate backworld of Legion, on the edge of the known galaxies and whatever lay beyond.

In the thirty-sixth century, a group of scholars were arguing about where the ancients of ‘the Ancients of the Universe’ had been based, what had happened to their technology and whether the legends of the Glamour were true or not. They consulted the writings of Trout the Talpidian; the journals of the Generational Professorial Clone Family of Candy; the mythical Sky Ray Lolly Wrappers of the Miwk Archives; the Holy Dam Scriptures of the Tarka People of Leina VI; the Repository Banks on the Large Moon of Pixlie and even requested access to the Panopticon Records from the Obverse, but got no response.

In the fifty-first century, at Stormcage Confinement Facility Number One, a message was received by a representative of the Church of the Papal Mainframe requesting the loan of a prisoner called Professor River Song. The request was immediately denied.

Also in the fifty-first century, two criminals were sentenced to life without parole at a different Stormcage Confinement Facility, Number Eight. Human con artist Cyrrus Globb had been ensnared by one of his ‘conquests’, the Spyro weaponista, known to everyone as Kik the Assassin, who had been sent to, well, assassinate him, oddly enough. The Church had managed to arrest both of them on a number of charges and both of them had been imprisoned in adjoining cells to further their humiliation.

And in the TARDIS, as it drifted through the space-time vortex, one of the last survivors of the planet Gallifrey sat reading a dog-eared copy of The Hungry Tiger of Oz by candlelight, because he could. It was his TARDIS and if he wanted to have all the lights off and read by candlelight, he would. Could. Should.

Because there was no one else aboard his ship to tell him otherwise.

Reprinted from Doctor Who: Big Bang Generation Copyright © 2015 by Gary Russell. Published by Broadway Books, an imprint of The Crown Publishing Group, a division of Penguin Random House LLC.

In this article:Book Excerpt, Books/Literature, British Pop Culture, Doctor Who