One of the downsides about being a pop culture geek is that, over time, you see and read and listen to so much that it gets harder and harder to remember it all actively.
That’s why I think so many of us are prone to cataloging and trivia as part of our hobbies and collections. But even so, you can’t catch all the cool stuff. Eventually, you can’t remember it all.
One of those things, for me, is The Eltingville Club. 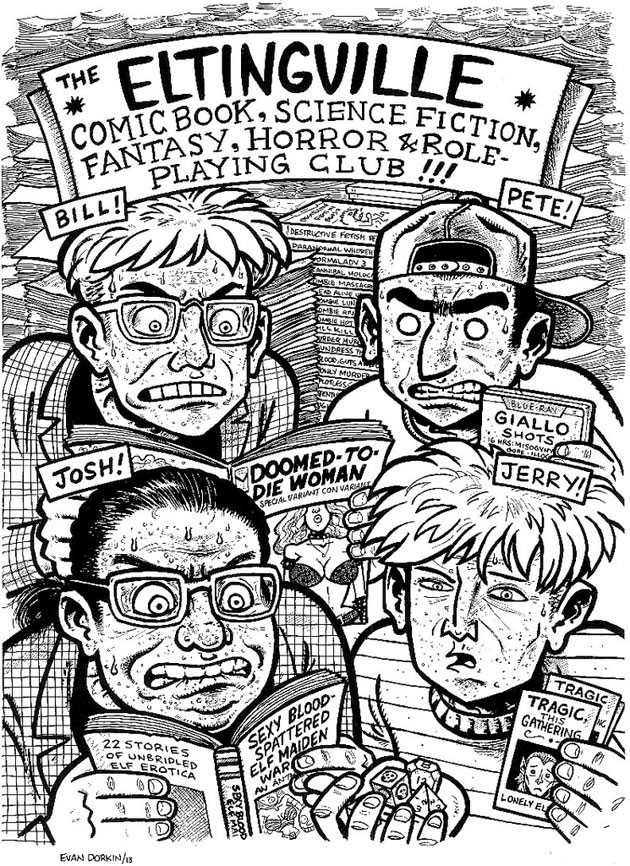 Bill, Josh, Pete and Jerry, a quartet of geeks in Eltingville, Staten Island, that comics artist/writer Evan Dorkin drew up to poke fun at geekworld’s stereotypes and illustrate some pretty legitimate gripes against it too.
I read their diatribe-laden misadventures in the mid- to late ‘90s, in back pages of Dorkin’s House of Fun and Dork comics. But by 2002, the club was gone along with Dork. Every once in a while I’d remember Dorkin’s sociopathic behemoths Milk & Cheese.
Eltingville faded into the back catalogs of my mind until a week ago when I read about a new Eltingville Club comic.

And, just like that, I experienced one of the great joys of geekery – stumbling upon something you really, really liked that you forgot how much you liked it.

Dorkin picks up the story with the boys in the present day as (nominal) adults at San Diego Comic-Con. As most of them cling to 1996 in their geek bunkers, Dorkin uses the Eltingville boys to show how much the world around them has changed.
The ‘90s were an interesting time in the old world order of geekery.

Superhero movies were pre-Marvel revolution, video game movies were absolutely putrid, rock and roll saw its final bloom as America’s top folk music, the Internet was about Geocities sites and who owned the title of “Most Downloaded Woman.” Apple wasn’t cool again yet, Comic-Con was only about comics, Todd McFarlane was everywhere, cellphones were nowhere.

And nerds and geeks of all stripes – comics, video games, horror movies, RPGs – were still stuck in mom’s basement regarding social dominance in a world not yet broken free from its analog mode.
This is where The Eltingville Club lived, stewed, thrived, self-destructed and burned down both a Toys R Us and a comic book shop.
Evan Dorkin’s Eltingville Club laid bare the rage, gate-keeping pedantry, and misogynistic evil sitting deep in the worst of fanboy circles and now crackling through places such as Reddit and 4chan – new versions of the ancient Internet forum that is the message board.
Jolly R. Blackburn’s Knights of the Dinner Table jabbed lovingly at RPG players. Eltingville clubbed its geeks, as well as the industries servicing geeks, with Dorkin’s depressive, self-critical (or self-loathing) outlook as an outsider among outsiders. 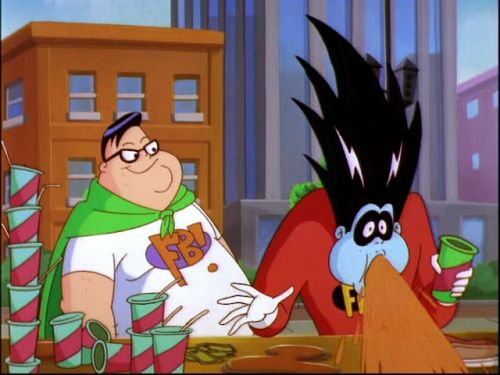 In those Eltingville pages, Dorkin was ahead of pop culture, society and Hollywood swallowing geekworld whole. The cartoon Freakazoid, starring a nerd who turns into a superhero powered by the Internet itself, also was hip to our coming world through characters such as Fanboy, and the “Nerdator” episode, in which an alien captures all the nerds because the technocratic future is theirs.
And as the wider world has come for geekworld, I’ve seen years of culture wars regarding the soul of these fandoms. Geeks like to think they’re different from society, but it’s funny how much the racial-class-gender-sexuality hierarchy has played a large part in setting up geekworld as we know it.
People who aren’t, yes, white straight men (and cisgender is now getting added to the pile) have been stepping into the fan spaces with greater frequency, demanding more of themselves reflected, and doing fandom their way.
Dorkin depicts some of the backlash, particularly regarding how girl geeks aren’t “authentic” enough, or doing cosplay just to wear skimpy outfits and “tease” the men – arguments that are 15 kinds of bullshit, but still very prevalent. 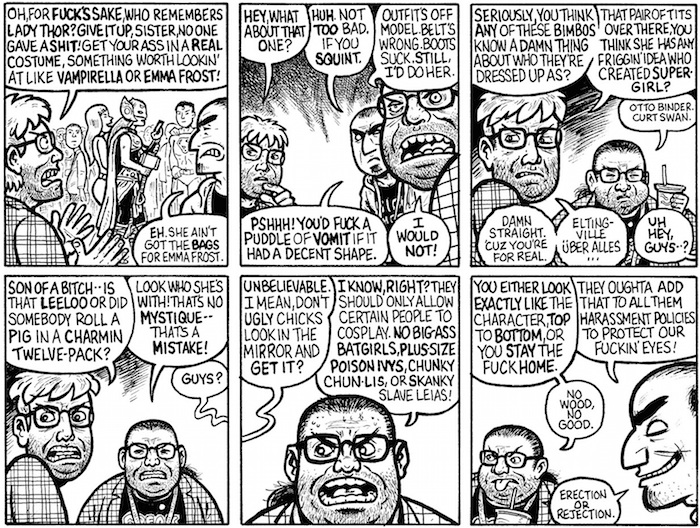 If they weren’t so commonplace, The Mary Sue, Women Reading Comics, Gail Simone, i09 and countless other geek websites wouldn’t have to spend so much time on it. 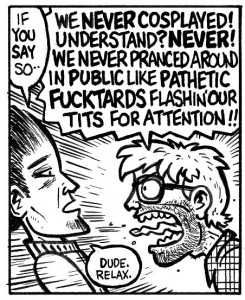 The Eltingville boys use these arguments to shout down con harassment policies that continue to catch on. A turn in the story centers on a Felicia Day-style host on a Nerdist-like geek website, whom Bill berates in a page-long, multipanel diatribe so misogynist and terrible that even his fellow Eltingville rejects back away from him, including Pete, who admits he mainly sees women as “receptacles.”
And because bigotry has its own fragile, mental-gymnastics logic, the boys slut-shame female cosplayers for sexing up their cons while not sexing it up with them, and then fat-shame other female cosplayers for not possessing the male-gazed, busty muscle babe physique drawn in the comics. Of course, they couch their disdain in wanting the cosplayers to appear “exactly as drawn, top to bottom.”
As well as Dorkin writes Bill, Josh and Pete’s misogyny and sexism, I think he missed out on leveling the same fusillades as strongly at the casual racism that often goes with such white guy-centered pedantry among fanboys. We get the line in the new Eltingville Club comic about how Zatanna’s “not supposed to be Mexican,” but maybe there could have been more.
That “exactly as drawn, top to bottom” pedantry on characters has been reflected in backlash over Idris Elba as Heimdall in the Thor movies, Michael B. Jordan as Johnny Storm in Fantastic Four, or John Boyega’s head emerging from beneath that stormtrooper helmet in the Force Awakens trailer.
In a society based on white supremacy and cultural dominance, how often have we seen racial prejudice align itself with geeks’ desire to never see the character they loved as kids change?
The new, all-female Ghostbusters lineup rightly has broadcasted the reboot as a feminist triumph, especially thanks to sexist fanboy backlash.
DC fans can’t let go of Hal Jordan so much that the Green Lantern Corps has been destroyed and remade, what, 10 times since 1995? For Hal Jordan?

After about 80 years of mostly white, male writers, artists and editors in the comics industry, we’re struggling just as hard at diversifying the mainstream system both on the page and behind it. (Small press, indie and creator-owned companies, by comparison, appear to be doing much better on this front. For one, not every female character needs a rape in her backstory to be seen as interesting.)
Look at how often a person of color or a white woman steps in as a character, as the fan base awaits a return to the “real” version, from a blatino Spider-Man to Falcon taking over for Captain America, to a female Thor. For whatever reason, Danny Rand remains white for martial arts master Iron Fist. That Marvel can do an entire sales campaign around hip-hop covers while still not having a strong number of people of color on its creative teams.
That many black characters in comics, for example, are either explicitly super-black (Black Lightning, Black Panther, Luke Cage) or their black bodies are diminished, such as Cyborg (literally half a man), Deathlok (undead, cyborg), Spawn (undead, Freddy Kruger face underneath), Steel (fully encased in a metal suit). At least the latest version of Wally West bucks that history, until they change him back to the redhead.

And as good as most of the X-Men films have been, Bryan Singer and his cohorts gave Storm — the best, most fully realized black superhero of all time — extremely short shrift, with such limited interiority that an Oscar-winning actress had nothing to work with. Oh, and Halle Berry still ended up taking the rap for Storm being bad in the movies. 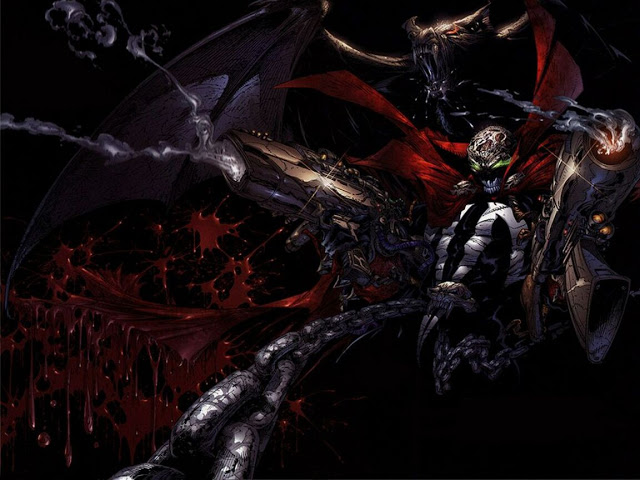 Given all of this happening in geekworld, mere coincidence isn’t enough to explain The Eltingville Club being four white guys, right?
We can complain about the politicization of art and pop culture, as if it should sit on a mountaintop above us. If it’s made by human beings, there is a politics within that art or pop culture.
After all, we pour ourselves into the things we make.

They reflect who we are, in one way or another. And much of the art that endures has the politics of its time to thank. Remember that for every straw-man’s lament over “P.C. culture” killing art, we have the Hugo Awards’ incursion from the Sad Puppies. For every whinge about diversity in casting (and directing/producing, too), we have Every Single Word and the numbers on representation.

But we’re all still geeks. Dope stuff is still dope, even if we take issue with something. We can pick at issues in stuff we like without meaning it sours the whole cake. It’s why, as Caroline Seide explains, you can like Return of the Jedi but hate Ewoks. (Though I like Ewoks. Yub nub for life!)
It doesn’t necessarily mean we’re angry or misguided. We still can discuss – even angrily discuss – a systematic injustice connected to some movie or the music industry or pop star, and still like those things or things like it. Alison Bechdel’s joke about gender representation led to the Bechdel Test, but it’s only a conversation starter. It’s meant to shake up our minds, and eventually our routines. And geeks love routines.
But, identity politics aside, there’s also a vision of joy and real geek adulthood in the latest Eltingville Club, as Jerry becomes the moral center of Dorkin’s satire. Jerry doesn’t indulge in the misogynist rants, or the hating-for-hate’s-sake stuff that powers all those “everything wrong with” videos on YouTube.

Jerry turned playing Magic: The Gathering it into a living, got himself a fellow geek girlfriend, comes off as handsome and affable. He tries to bury the multiple hatchets among his fellow club members after 10 years of not speaking to them.
Of course, because the comic has to tell a story, Jerry gets pulled back into Bill, Josh and Pete’s awfulness, which escalates into a Day of the Locust-like apocalypse at Comic-Con.
Jerry teaches a lesson that folks such as Dr. Nerdlove spend considerable time explaining: Being the nice guy amid a bunch of awful people who fit the same tribe as you may gain you nothing. And, like Uncle Ben dying after Peter Parker let that thief run away, tolerating them without question could lead to you being dragged down with them.
As Jerry finds out, sometimes you can’t go to your geek home again.

Sometimes you revisit, enjoy for what it was, and leave. You can pave that home over and put up a parking lot or condos. You can, like Bruce Wayne at the end of Batman Begins, rebuild the place brick by brick but with some special modifications in the East Wing.

Or you just sell the home and hand the keys to someone else.

And sometimes, like Jerry, you have to tell your old friends off and step out of the Ghostbusters car.
Sorry, I mean, ECTO-1. 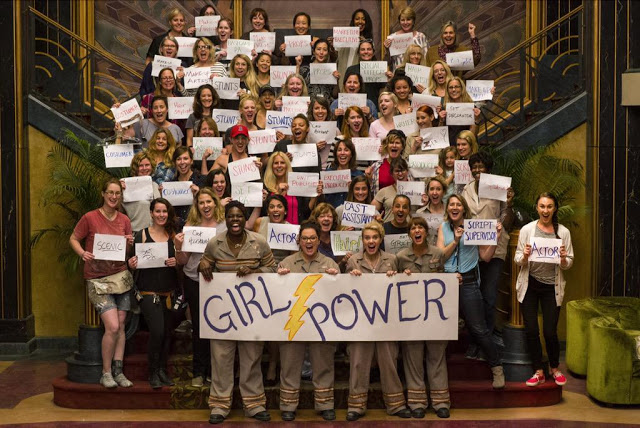