I remember the first time I saw The Phantom Menace action figures on the shelf at my local K-Mart. It was about a month away from the opening of the film, and all of the attention was on the devilish looking Sith Lord, Darth Maul.

I rummaged through a cardboard sea containing Chancellor Valorum and Captain Panaka, but where was the new villain that was going to take the Star Wars franchise into the new millennium?

I asked the store clerk if they happen to have any Darth Maul’s left in-stock.

He proceeded to laugh at me with his head cocked back while holding his belly as if he was Santa Claus. I looked at my invisible wrist watch to signify my displeasure over his world class customer service skills. His laughter ended and was followed a gruff sounding reply of “Dude, you had to be here at midnight to get that thing.” 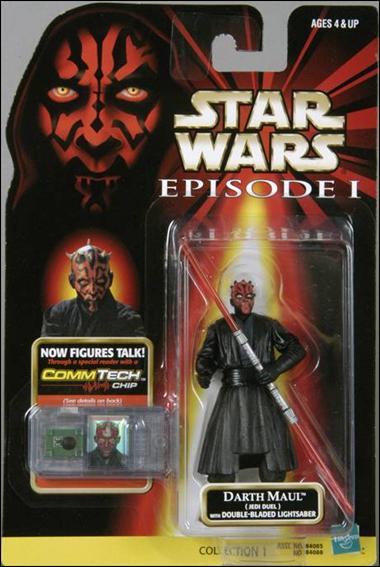 What the hell was he talking about?

Later on, I discovered the phenomena called a midnight release where die hard fans of a particular franchise line up hours in advance and are the first patrons to buy merchandise or see the correlating film. In the case of Star Wars figures, the in vogue item on everyone’s list is the evildoer who wields the red lightsaber….

This was to mark the first time that merchandise for the upcoming The Force Awakens film would be released to the general public. There were several items on my list, but the apple of my eye were the 6’ Black Series figure of the new cross guard lightsaber wielding foe, Kylo Ren.

My friend Ryan and I arrived at Toys R Us at 11:20 pm and by my count, there were already 56 people in line. 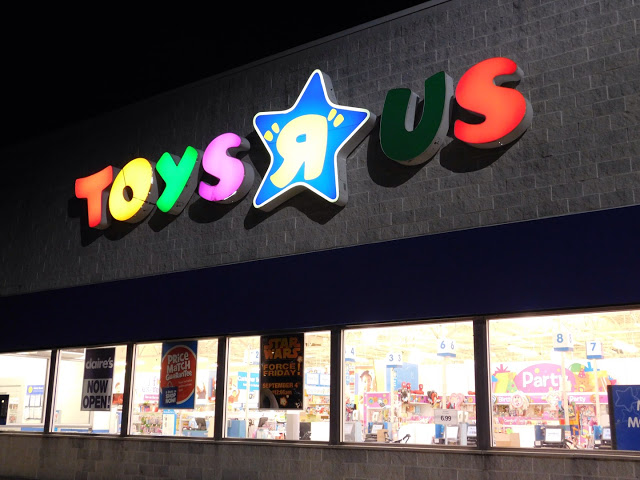 There was a friendly assortment of singles, groups, and families all sharing their passion for Star Wars. This was a breath of fresh air since, in my experience, most of these type of special release events are full of what I call elitist nerds who act like they are above us mere mortals because their knowledge of the franchise is so advanced.

There was a gentlemen I met who recalled his experience for the midnight release of the Episode III figures.

10 year later, he was proud to share this moment with his daughter who could barely contain her excitement as flashes of Chewbacca and Asoka danced in her head. There was a sign informing the scum and villainy known as e-Bay hoarders that they would only be allowed to purchase three of each item.

This made me smile as it increased my chances of getting Kylo Ren.

The doors opened, and we were let in ten at a time while being handed an exclusive Star Wars LEGO piece and Kylo Ren poster that will soon find a place on the wall in my office. 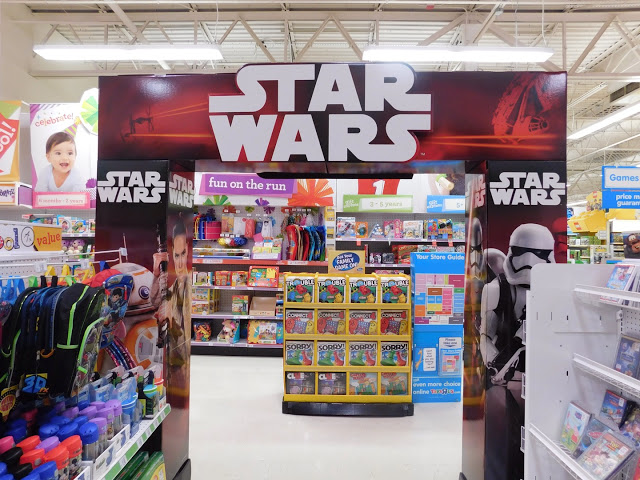 I wanted to run to the special Star Wars section that was nicely laid out, but for some reason, I felt it would be wrong. So I calmly power walked to a mass of humanity feverishly grabbing anything that was labeled “The Force Awakens.”

I felt a great disturbance in the Force as all of the Black Series figures were already gone.

Plan B was to score some of the 3 ¾ figures and hope that the odds were in my favor as the 1 in 3,720 to get a Kylo Ren. However, those particular items were rapidly becoming few and far between. As I wrestled my way over to the 3 ¾ area, there was a sea of Luke Skywalker and Darth Vader figures.

I began to lose hope, but the voice in my head aggressively yelled “Stay on target.” 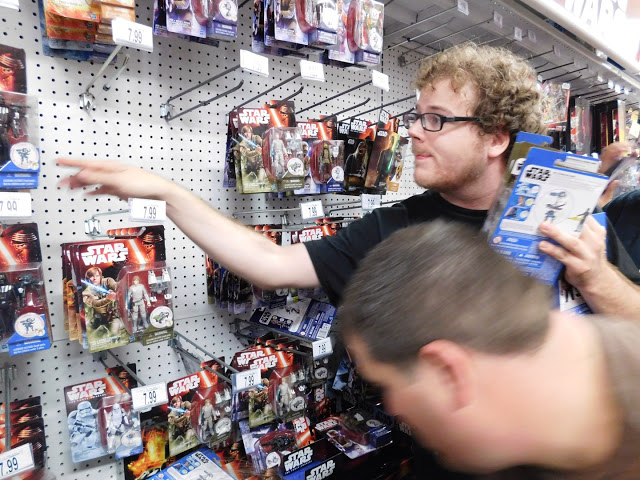 I reached out, but I
couldn’t reach due to a blockade in the form of a short brunette lady
who was dressed in yoga gear and was doing squats and had her head on a
swivel while grabbing things at random and throwing them into a shopping
cart. I decided to wait until she was done and then make my play for
Ren.

Then I had second thoughts and realized that I might lose out on my
one and only chance.

I made a decision.

This innocent bystander made a
critical error by getting in my way, and the time for my attack had
come. With her back turned to me, I lightly bumped into her and she
moved forward the few feet required for my objective. As she turned
around, I placed my right hand on her shoulder, with feigned concern,
and apologized as I snatched Kylo Ren with my left hand. 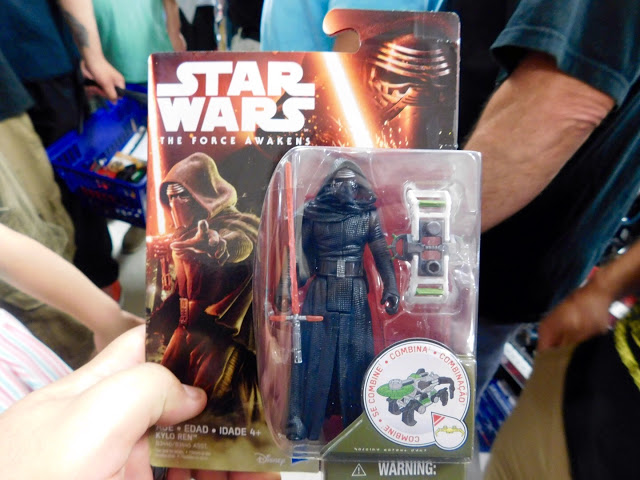 I know, I know. This is not one of my prouder moments.

A young man, who showed up late to the party, ran towards the chaos as if he had been chased by a Rancor. Out of breath, and with his hands on his knees, he optimistically asked “Are there any Kylo Rens left?”

His inquiry was met with a thunderous amount of laughter with a couple of people boastfully yelling “Yeah right” for good measure.

This brought me back to the time I was laughed at when I dared ask if there were any Darth Maul figures left.

Feeling a bond with this guy, I looked around and out of the corner of my eye, I saw the very last Kylo Ren hiding in plain sight. “How did everyone miss this?”, I wondered as my heart suddenly grew two sizes bigger. I grabbed the figure and handed it to him and received a very heartfelt thank you

New characters to the Star Wars franchise such as Poe Dameron, Finn, and the fierce looking Constable Zuvio joined my growing collection of new merchandise.

It was a cute sight to see little children dragging around, at their parent’s behest, a four foot tall First Order Stormtropper. 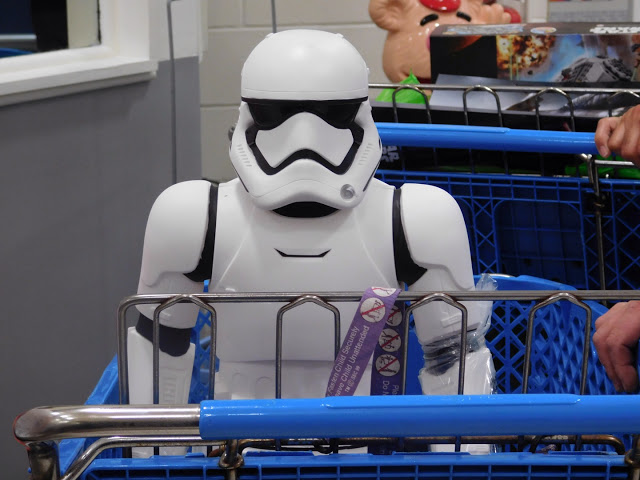 I grabbed a couple of Vinyl Pop collectibles and ended my gathering with an enormous Special Forces First Order Tie Fighter with pilot.

As we headed to the cashier, the Dark Side reared its ugly head as some guy ordered his girlfriend to follow his example by grabbing a shopping cart and start filling it.

Below is their conversation after his order had been given.

“You know, you don’t have to get everything today.”

“Yeah I do! The clerk said none of this stuff will be back in stock for two weeks!”

I stopped listening after that as it was time to pay for my goodies.

This just shows how seriously people in my area were taking this momentous day. 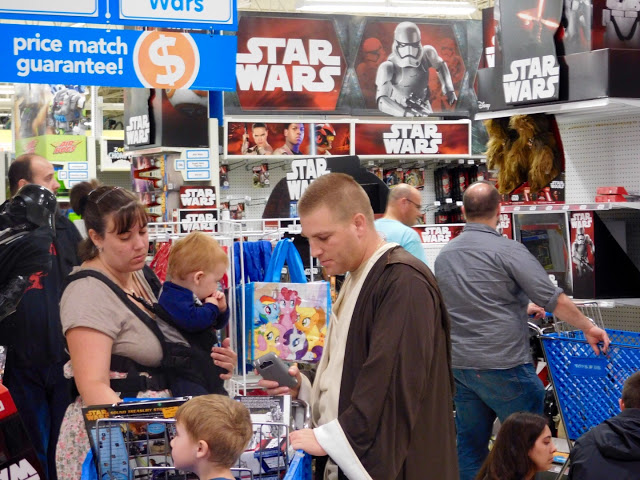 According to various reports, Toys R Us had the least amount of product as Walmart, Target, and the Disney Store had more volume and a wider variety. In fact, most Toys R Us locations only received one case of the Black Series.

After some much needed sleep, I scoured my local Target for seconds, and picked up a Revell model of Poe Dameron’s orange and back X-Wing fighter. I should mention that I hate models, so that should put in perspective how badly I wanted this vehicle.

It’s funny how as Star Wars fans we are so eager to buy merchandise featuring the new characters considering we are three months away from the film’s release. Also, with no full trailer or official synopsis as of yet, we still don’t even know what the movie is about.

What if Kylo Ren is more “From my point of view, the Jedi are evil” than “I find your lack of faith disturbing?”

I think faith is the operative word here, and we have to hope the Disney knows what they are doing.

I had a blast at Force Friday!

It was great to converse with fellow Star Wars fans who had no ego and just wanted have fun with their favorite pastime. I can’t wait for the next one! 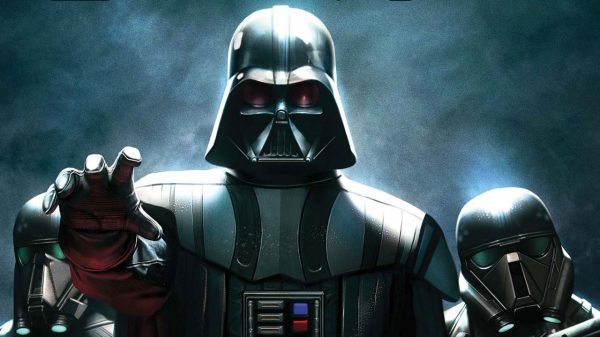