The Final Girls is a funny, clever parody of ’80s slasher movies like Friday the 13th, but it’s also a fairly poignant story of the loss of a parent.

Taissa Farmiga stars as Max, who loses her “scream queen” mother (Malin Akerman) in the film’s opening scene. Years later, she’s still grieving and is reluctant to appear at a revival of her mother’s horror camp classic Camp Bloodbath. When a fire breaks out in the theater, she slashes the screen to escape and gets sucked into the movie itself!

Now, along with her friends (including Alexander Ludwig and Nina Dobrev), she’s got to survive the film’s Jason Voorhees-like killer, but even more importantly, keep her mother from dying all over again.

FOG!: How did you keep the balance between campy horror parody and moving mother-daughter story?

Todd Strauss-Schulson: Honestly, the movie really is a mother-daughter story. It’s about the death of a parent, which is really personal to the writers (Joshua John Miller and M.A. Fortin) and also to me.

I had lost my father and so had they. This movie is really about that, cloaked, almost in a horror movie.

When I first read the script, I thought what was so smart about the idea was that it was a really sweet movie about the rebirth of a death or the loss, which I could relate to. But in the middle of that is a genre which doesn’t take that seriously at all. I thought that was a clever movie idea. Most horror movies, the more people who get killed and the grosser it is, the more fun it is. This is the aftermath of a loss like that. The genre’s sort of helping push the emotional story forward. I think having a personal way into it… that was the story we were telling.

Everything else is kind of cloaking the story. I don’t think we could have made a straight indie drama about losing a parent. It’s so much more exciting to do it like this.

Josh Miller, the cowriter, was in an ’80s horror movie, Near Dark (although nothing like Camp Bloodbath), and his father, Jason Miller, was in The Exorcist. Was that the inspiration for the script?

Yes, it was really his idea. Josh had also lost his father, who was a really famous actor. He was the priest (Father Damien Karras) in The Exorcist.

So Josh, I think, has this really personal experience, very much like Max in the movie of watching his dad up there on screen get killed over and over again and how complicated that was as a young person.  I think that’s really where the idea came from for them.

I read it and then said, “That’s a really wonderful idea.”  I happen to have my own experience that I felt I knew how to tell that story.

I made my first movie when I was 29 years old and my father died three weeks before I started that film. So the experience of making that movie was obviously really intense. He was my best friend and really supportive of my creativity, so I was dreaming about him almost every night while I was making that movie.

Josh (Miller) and Mark (Fortin) sent me one of the early drafts of this script during that movie so I read it right in the middle of this experience. And that was my impulse to make this film: “Oh my god, this girl has a second chance to see her dead mom in a dream.”

Were you a fan of ’80s slasher movies?

When I was a kid, I lived next door to a West Coast Video in Queens, New York and I tried to watch all the movies. When I was young, horror movies really terrified me, actually. I would see Fright Night or House and not be able to sleep for days or weeks. When I saw Misery, I was so affected by it.

When I was 13 or 14, I found Dead Alive by Peter Jackson and I fell in love with it. It didn’t scare me, it was just gross and hilarious and full of imagination. Really vital filmmaking and I loved it. That was my way into horror movies. I loved A Nightmare on Elm Street and I loved Sleepaway Camp. I used to write away to Dick Smith who was this special-effects makeup guru who recently passed away. I really fell in love with the fun of filmmaking movies like Army of Darkness.

What about the cast? Taissa is just 21, so had she seen any of the ’80s movies you’re referencing?

No. Taissa and Malin and Nina (Dobrev), when they read the script and we all met and decided to do this, it wasn’t “Let’s make a horror movie.” 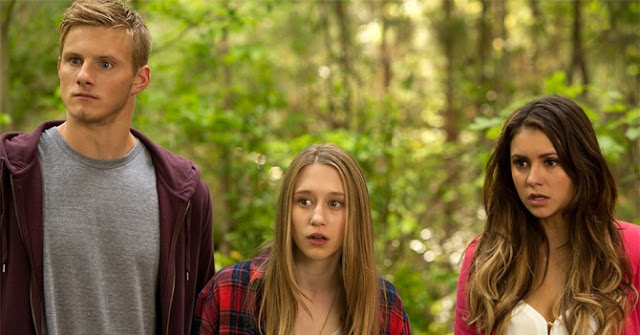 It really wasn’t about that at all. It was really about this mother and daughter and getting a second chance to see your mother in a dreamworld. It was that that was compelling to everybody. And the horror stuff existed to push ahead that emotional idea.

But it seems like your target audience is people who love ’80s horror movies.

I think you’re right. What’s actually been really nice about the experience of going to all these festivals – we’ve been at SXSW and TIFF – is the horror community has completely embraced the movie. That’s so nice! I was a little worried because it is pretty emotional and PG-13 and I was worried they would reject the movie. In fact, they’ve really embraced it because it’s sort of a love letter to the genre. But not just the horror fans, I feel like comedy fans will love the movie. 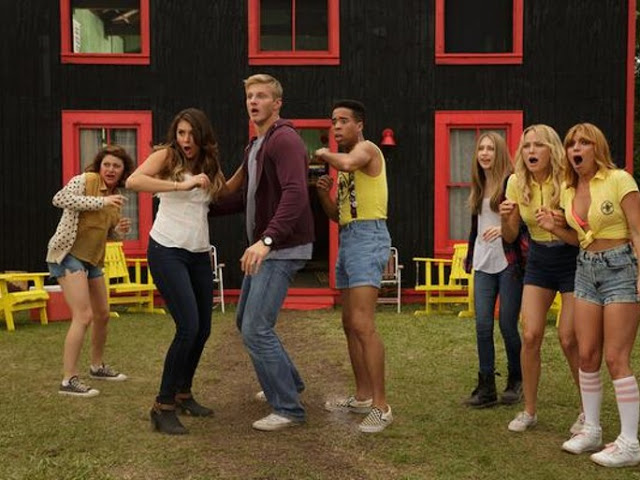 
The climactic showdown between Nancy (Malin Akerman’s character in Camp Bloodbath) and the killer is very dramatic, with thunder and lightning. It’s almost like a music video. What was your inspiration for that scene? 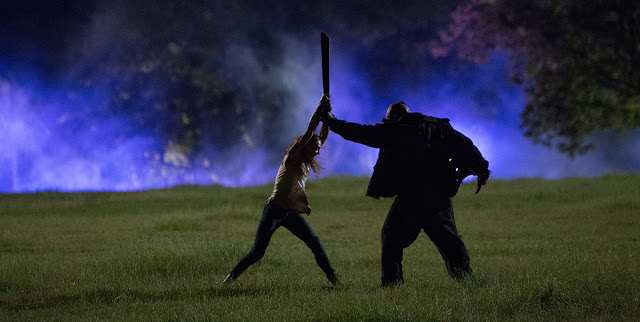 And that really opened up my imagination of what we could do creatively and visually. And so the movie does feel like a hyper-cinematic, hyper-real dream world, almost more like Wizard of Oz than anything else. So the colors are outrageous, almost like Gone With the Wind with matte paintings and very stylish and very cinematic. It’s a movie about movies and a bunch of movie lovers made it, so the joy of filmmaking is in this movie, hopefully.

So that final showdown is very painterly, yeah. It’s surreal: The sky’s red and there’s this purple haze. It’s trying to be beautiful, almost like a Technicolor dream world, and that was part of the design of the movie, like the dreams I was having about my father as I was working on the movie.

It’s set up for a sequel: Are you planning on one?

I hope that we do. It was genuinely really fun. Everyone was kind of the same age on set, so it felt like we were a bunch of kids at camp with no adult supervision, kind of getting away with something. No one could stop us!

But it was so fun to make it and I would love to go do more. But it really is about you and your readers and everyone out there going to see this movie and talking about it online and convincing a bunch of accountants to do it. Because we would love to.

Would Malin Akerman be back?

Everyone would be back. We’ll figure it out! Everyone’s coming back and more. 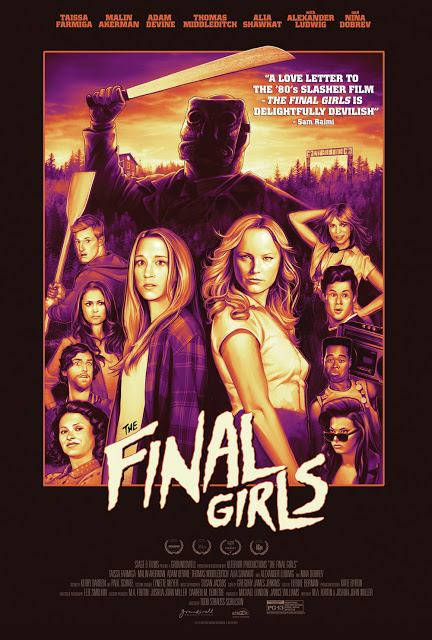 The Final Girls is now in theaters and on VOD