The sky was clear at New York Comic Con, yet T.H.U.N.D.E.R. dominated the news of the day as Huayi Brothers Media Corporation and Michael Uslan, originator and executive producer of the Batman film franchise, and producer David Uslan announced the first-ever branded super hero franchise to be backed by and developed with a major Chinese media company – T.H.U.N.D.E.R. Agents.

To the delight of a capacity crowd celebrating the 50th Anniversary T.H.U.N.D.E.R. Agents panel within New York Comic Con at the Javits Center, the Uslans and Huayi Brothers Media Corporation President James Wang made the announcement to expand the treasured franchise beyond comic books and into films, television, gaming and a host of other entities.

The T.H.U.N.D.E.R. Agents major motion picture is expected to hit theaters worldwide in 2018. Also present for the announcement was franchise producer David Uslan, who along with Michael Uslan have formed the production company, SHANGHOLLYWOOD, LLC; T.H.U.N.D.E.R. Agents executive producer David M. Matthews and the film’s screenwriters Ben Lustig & Jake Thornton; and representatives of the CEA Group, a partner in the franchise with a minority stake who arranged the deal between the Uslans and Huayi Brothers.

“This franchise has an unending canon of tales that work perfectly in live-action and animated entertainment of every form,” added David Uslan. “These are great stories that need to be told.”

“T.H.U.N.D.E.R. Agents relates an important, timely message of global unity, understanding and teamwork, told with an action-packed perspective perfect for life beyond comic books, ” said Wang. “We have every intention of expanding the T.H.U.N.D.E.R. Agents universe into film, television, gaming, theme parks and branding in every appropriate medium.”

Uslan, noted builder of branded franchises, has (aside from Batman films) been involved over the years in such projects as The Lego Movie, National Treasure, Constantine, and Emmy Award-winning series Where On Earth Is Carmen Sandiego?. Uslan’s memoir, “The Boy Who Loved Batman,” is published by Chronicle Books.

The versatile producer/writer Matthews has had a presence on the entertainment scene since the late 1980s with credits on numerous primetime series, including the Cedric The Entertainer vehicle The Soul Man, For Your Love, The Nanny, Half & Half, Living Single and more. In addition to producing and writing, Matthews has also composed music for several projects, winning a Daytime Emmy Award in 1989 for music direction/competition on The Young and the Restless.

Lustig and Thornton have been charged with elevating T.H.U.N.D.E.R. Agents’ comic book roots to big screen adventures. The writing duo have been a hot topic in Hollywood circles in 2015 as Sony Pictures has inked them to script a pair of high-profile films – Winter’s Knight, a Viking-mythology-based St. Nick tale, and the H.G. Wells adventure, The Wells Initiative. Lustig and Thornton have already presented a full treatment for T.H.U.N.D.E.R. Agents’ maiden voyage on film.

The Uslans and Wang paid compliment to the United Nations for its essential role in ensuring the sanctity of the partnership, and the proliferation of this unique franchise. The initial T.H.U.N.D.E.R. Agents movie will be filmed both domestically and in China, as well as other select international locations. David Uslan alluded to a possible announcement of an A-List director during the American Film Market next month in Santa Monica.

Celebrating its 50th Anniversary in 2015, T.H.U.N.D.E.R. Agents still stands as the first and only truly international comic book super hero group set up to work for the United Nations. Created in 1965 by the legendary comic book artist, Wally Wood (Mad; EC Comics; designer of Marvel’s Daredevil costume), T.H.U.N.D.E.R. Agents has featured the work of some of the greatest artists in comic book history, including Steve Ditko (co-creator of Spider-Man and Dr. Strange); Gil Kane (co-creator of Green Lantern and The Atom); Mike Sekowsky (original artist of Justice League); Dave Cockrum (co-creator of the new X-Men) and many more. T.H.U.N.D.E.R. Agents was published by DC Comics for a number of years in a series recognized for its cutting-edge, contemporary, dark graphic story-telling; today, IDW Publishing helms the franchise’s hardback and trade paperback book collections.

For comic book fans growing up in the 1960s, T.H.U.N.D.E.R. Agents was considered to be the new alternative to DC Comics and Marvel super heroes. It combined the darkness of DC with the fun of Marvel within a story of a United Nations secret black ops organization that recruited secret agents from everyday people in ordinary life, assigned them a code-name, and gave each one a device that provided him or her with one super-power. But with each super-power came a grave moral dilemma. Each T.H.U.N.D.E.R. Agent represented a different United Nations country, and that offered inherent internal conflicts within the team based on polarizing differences in cultures, religions and politics. But when faced with a greater threat, the s found a way to work together as one family for the benefit of all mankind. 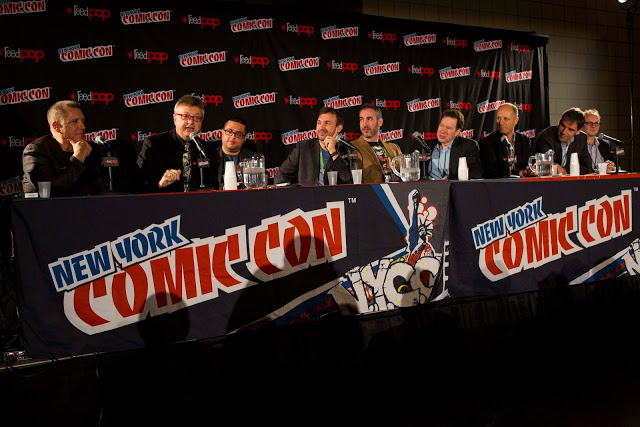