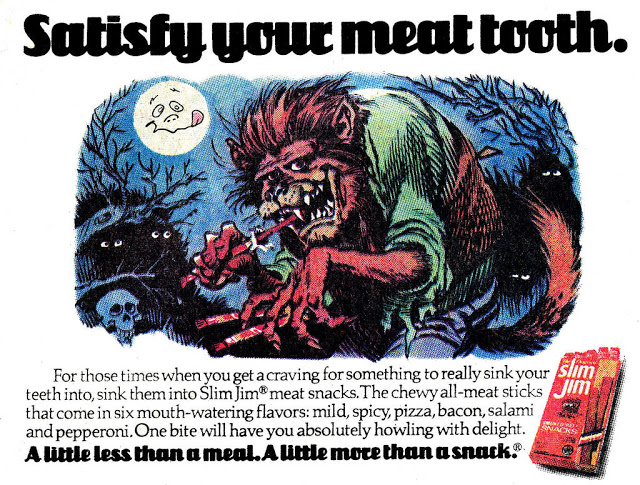 Growing up, I had a fascination with Slim Jims.

First of all, they were cheap.  You could buy several with the change in your pocket, and could rationalize the health benefits from consuming them (“They aren’t candy.  They aren’t sweet….just delicious meat…”).

Plus, according to their ads in comic books (which to this day, I cite as an authority and valuable news source, Slim Jims promoted lycanthropy.

Granted some of the ads featured Dracula, but I was clever enough to know that vampires craved blood, and would likely be dissatisfied by the chewy meat stick, but being a werewolf…that’s something cool and if the only real side effect is crave Slim Jims, that’s a curse I could both live with and enjoy.

Sadly, the knowledge found in the comics wasn’t accurate and my addiction to the meat-sticks not only kept me human, but now very, very thirsty.

And some of them are pretty impressive:

In the comments let me know which World Record you think you might be able to achieve.