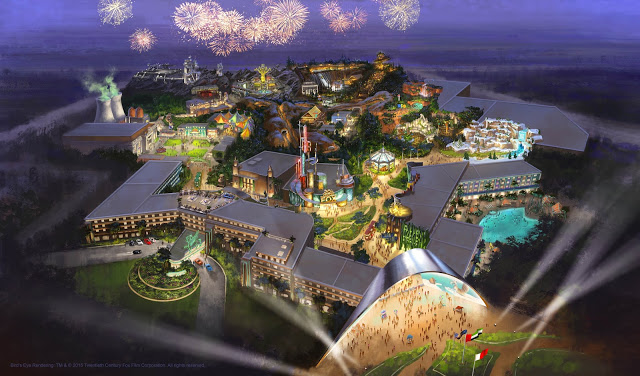 20th Century Fox World, Dubai, an immersive entertainment destination, will encompass themed lands featuring unique attractions, rides and retail outlets that will bring to life the studio’s iconic film and television franchises. The licensing partnership with AAHG also calls for the creation of the world’s first Fox-branded resort, where themed rooms and dining opportunities will offer visitors a chance to further immerse themselves in the entertainment brands and rich history of 20th Century Fox.

Highlights of 20th Century Fox World, Dubai will include:

Mohammed Khammas, CEO of Al Ahli Holding Group said, “AAHG’s history in the genre of entertainment is replete with successful partnerships with top motion picture studios. We pride ourselves in understanding the pulse of the audience and catering to it with novel and breakthrough projects.”

“Fox’s rich history of great entertainment-based intellectual properties from movies, television shows and animation concepts will help us spearhead this project and add value to our latest offering in the global entertainment space. As part of our international deal with Fox, we look forward to building these attractions and resorts globally starting with Dubai as the first location and additional Fox branded resorts that we hope to open across other territories in the future,” added Khammas about AAHG’s deal with Fox.

“We are thrilled to partner with Al Ahli Holding Group on this exciting project,” said Greg Lombardo, Senior Vice President of Global Live and Location Based Entertainment for Twentieth Century Fox Consumer Products. “20th Century Fox World, Dubai will provide an ongoing platform for immersive brand engagement with our consumers from around the world, including key international markets of Europe, Russia and China.”

“The synergy created by AAHG’s partnership with Fox will enable 20th Century Fox World, Dubai to offer the consumers in the Middle East and global tourists visiting Dubai to experience world-class facilities with unique attractions and retail outlets that will take themed entertainment to a different level,” said Manoj Aheeray, Director of Investment and Strategy for AAHG.

20th Century Fox World Dubai is slated to open in 2018, Design and Production services are being provided by Rethink Leisure & Entertainment.