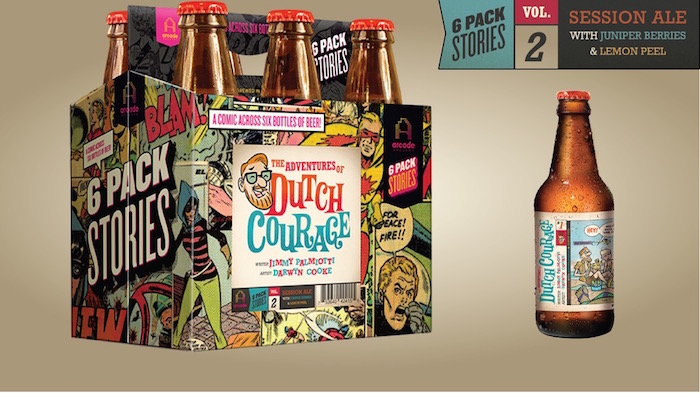 Chicago craft brewery, Arcade Brewery, has announced that it is releasing a second volume of their highly popular series, 6-Pack Stories™ on November 18th , 2015.

6-Pack Stories™ is a collaborative series between Arcade Brewery and popular comic industry talent. Each year, Arcade Brewery partners with a creative team, crafting a beer inspired by an original 6 panel comic. The comic becomes the labels of the beer, with each bottle of the 6-pack being a different panel. Last year, Arcade Brewery teamed with Jason Aaron (Star Wars, Thor) and Tony Moore (The Walking Dead, Fear Agent) to created Festus Rotgut: a Black Wheat Ale paired with a zombie western tale.

This year, Arcade has partnered with Jimmy Palmiotti (Daredevil, Harley Quinn) and Darwyn Cooke
(Batman, Catwoman) to create The Adventures of Dutch Courage, a Session Ale brewed with juniper berries and lemon peel. “When we first saw the comic, the beach setting seemed to demand an easy drinking beer while the retro feel inspired us to add subtle classic cocktail flavors of juniper and lemon peel,” said Arcade Brewery Co-Owner Chris Tourre. “A easy drinking, malt-forward beer with a subtle gin cocktail quality, we hope the flavor profile mimics the twists and turns of the story. It should be an unexpected journey on both sides of the glass.”

All parties are clearly excited about the partnership. Palmiotti said, “I had a blast working on this with my good friend Darwyn and feel Dutch Courage making his first appearance on the side of a beer bottle is one of the best ways ever to launch a character!” Cooke added, “If you stop and think about all the beer Jimmy and I have consumed over the years, it’s about time we did something like this.”
Arcade Brewery plans to launch the beer at four select locations on November 18th (New Comic Day!) with the remaining beer being distributed throughout Chicagoland by November 20th . If you are curious of where you can buy the beers, Arcade Brewery provides a handy “beer map” on their website, displaying all of their retailers.

If you’re not in the Chicagoland area you’ll be able to find it online from The Beer Temple and WestLakeview Liquors. Be sure to request it in advance from your local retailers!