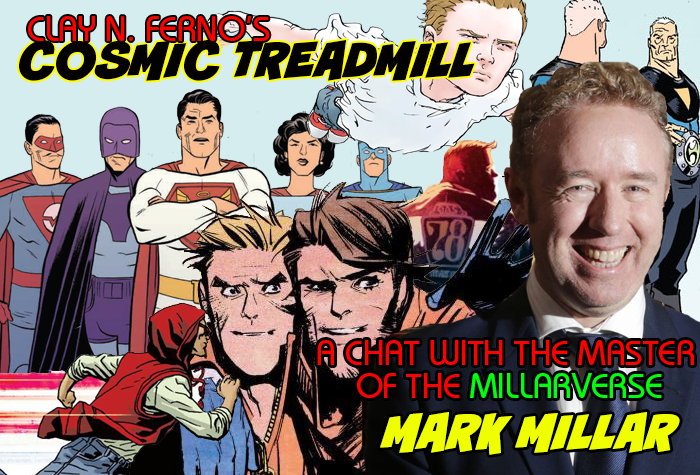 Superstar writer and undisputed Hollywood hitmaker Mark Millar (Kick-Ass, Wanted, Kingsman: Secret Service) took some time to talk with us about the continuation of his multigenerational superhero team Jupiter’s Legacy and the prequel Jupiter’s Circle.

Chris Sprouse (Tom Strong) will takes over on Circle next year, and details of books with both Greg Capello and Jae Lee have yet to be announced. We’ll also see more volumes of Chrononauts and Hit-Girl. 2016 will be another great year for one of the most genuine fan and creator of super-hero comics we’ve ever spoken too.

That’s a lot to keep up with, so follow #millarworld2016 on Twitter for more info, but join as we orbit Jupiter right now!

FOG!: We’ve just finished the last issue of Book One of Jupiter’s Circle. Did you always know you were going to do the two books together, Jupiter’s Circle when you came up with Jupiter’s Legacy?

Mark Millar: Not really, actually, no. For about two months before I started writing Jupiter’s Legacy, I stood in my office and I had all of these yellow post-it notes working out all the history of all the characters in the series because I was building like the Star Wars universe or the Lord of the Rings universe. It was a working body that needed to have everything connecting properly.

I just made a point of making sure I knew all of the back histories of everything. So I was like a crazy guy, I actually had all of these stories that no one would ever read as crazy as that sounds. I had yellow post-its in my office and even into the dining room and I worked out all the back stories for the parents and how everybody felt about each other.

Then what I did was I connected it all and my agent said to me when Frank Quitely was taking a while for Volume Two, where we were stockpiling it, “Why don’t you write that story you have up on your wall”?

I said, “Yeah, I love that story”! And I had always wanted to do a period super-hero thing, something set in my favorite American era which is that Mad Men era, I feel its the beginning of the DC or Marvel Universe, the Silver Age. I just started putting it together.

I think its the most fun I’ve ever had writing anything, it’s been so easy, I think because I’m so passionate about it. It’s everything I wanted to say about super-heroes. 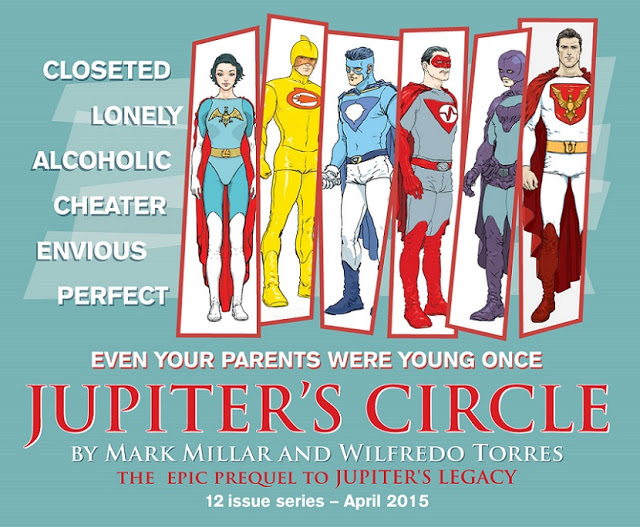 You can really tell, because I feel like is it the essence of what you like about super-hero comics for sure. I hope the fans are giving you good feedback, I just think it’s amazing.

I love to hear that because its funny being a writer, right? You just write something you like and you hope someone else likes it. (Laughs) That’s just a crazy thing, isn’t it, you tel a story you enjoy and you hope that by osmosis someone else enjoys it.

You are working on Book Two for Jupiter’s Legacy as well?

Yeah, Book One of Jupiter’s Legacy ended on a cliffhanger. Book Two has always been the plan the whole time. It’s ten issues, and Frank Quietly has sent the pages in for Book Two already. The way we are doing it this time is spending a year stockpiling all the pages once the series launches. So we wait a year and then we are monthly.

And the new Jupiter’s Circle volume?

Something I started in 2011 is kind of out of my life and I’m going to miss it.

How did you meet up with Wilfredo Torres and Davide Gianfelice, the other artists on Jupiter’s Circle?

Like most relationships I get these days we met online. We’ve never actually met, which is weird. We spoke on the phone once, and I remember saying, “your English is fantastic,” to Wilfredo. He said, “Dude, I live in Georgia”!

We’ve yet to meet in the flesh but we are planning at some point maybe next year to do a signing at some point. I can’t wait, I love his stuff. He’s so perfect for nailing the look of this. 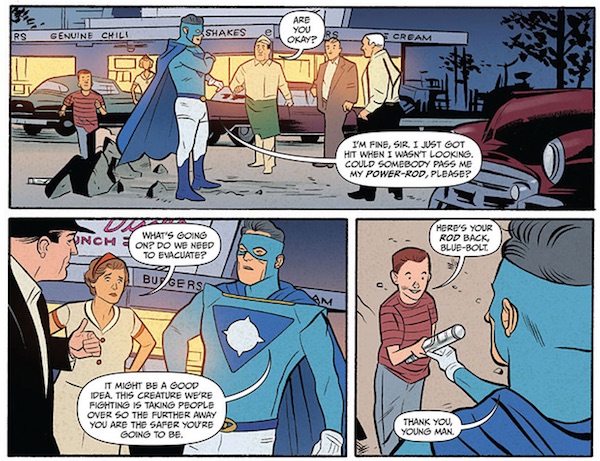 I’m glad you mentioned Mad Men, I was going to mention that too. Also, you have some historical figures there, Liberace to J. Edgar to Katherine Hepburn, so it must be fun to play with those guys and real history.

You know it’s brilliant because they are all dead, so I can do anything I want with them. If they were alive they’d be suing my ass right now!

It’s wonderful all these people I was really interested in have died in the last 10 or 15 years so I can have a great time with them all.

I never thought I would be writing a comic with Katherine Hepburn in it but this is what I’m passionate about right now.

A lot of creators will target McCarthyism and Fade Out is also taking a look at that now too. But you took on homosexuality in Hollywood at that same time which I thought was very interesting.

I don’t think it’s been done before, super-hero comics have explored the idea of a gay super-hero before, with Midnighter in The Authority and everything, but we live in quite progressive times where most people generally agree that you don’t persecute someone based on who they jump into bed with. 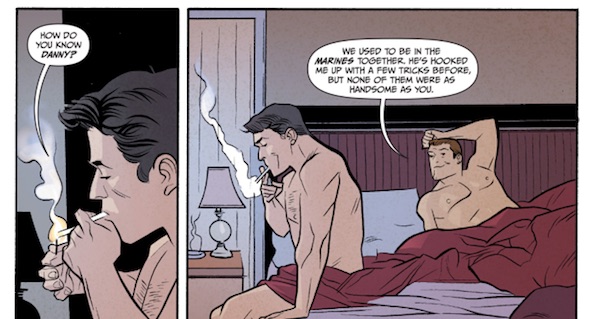 So, not quite as dramatic as it would be in 1959, so that’s what was interesting to me to play with the period. Maybe other guys on the team might say “Oh, I don’t know if we can have a gay guy on the team”, this could be a huge scandal or a huge problem for them.

From a dramatic point of view, that seemed a lot more interesting.

Something that had occurred to me as well, is this is almost your Watchmen. You go from the present to the past. I hope you don’t get offended by that, The Union and The Minutemen are VERY different teams!

Watchmen is not much of an insult!

It must have been fun to come up with the dynamics and the powers for everybody.


Watchmen has cast a gigantic shadow over every probably every super-hero book written since 1986! Believe me, it wasn’t as much in my head as much as Bewitched and things like that.

As silly as it sounds, I wanted it to be a cross between a European art-house movie about sexuality or something crossed with something like Bewitched or the Batman TV show. 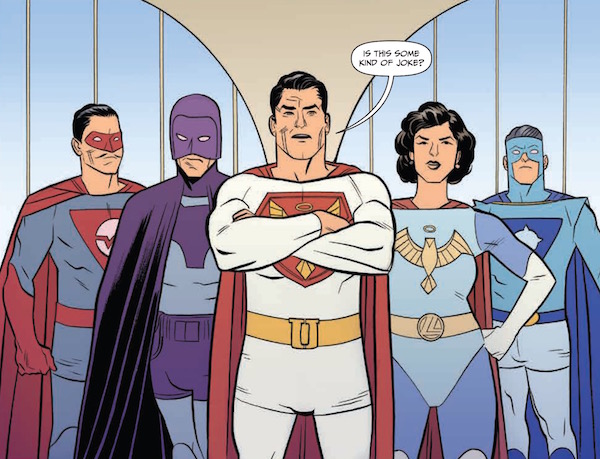 Watchmen was very realistic, where this is very colorful. I think you get quite a different vibe. It’s really about interpersonal relationships. My ideas was imagine you are watching your favorite super-hero cartoon and this is the stuff that happens Monday through Friday. The stuff that’s not the exciting adventures.

It just kind of wrote itself.

It’s very European with American subject matter but a European style I think.

I’ve heard you say too it is more Super Friends than it is an Avengers or Justice League team up. A little more light.

It doesn’t feel Marvel, it feels very DC I think.

Even the Teen Scene group, the teenagers, seem more like a Tiger Beat pop magazine idols than you would see as a Teen Titans.

They are that hybrid of both really, I wanted this to feel like old kitsch TV shows like The Monkees or something.

They’ve got a fun place to hang out, with a pole to slide down and that vibe.  It’s very distinct from Jupiter’s Legacy which is set right now or a little bit in the future, so I feel it is two very distinct entities, just in the way that we differ from our parents. 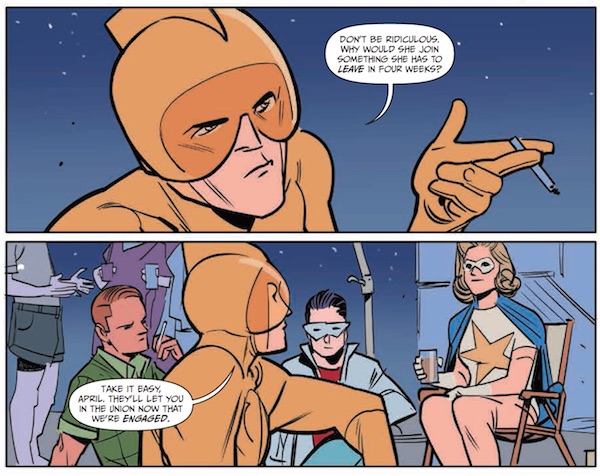 Will we find out about what happened on the island when the Original Six got their powers?

Oh yeah, that’s the big message that’s been running through both volumes. Really, the glue that ties it all together.

I love the fairy tale aspect or idea that you go out on a boat and go off to some magical island and then you come back with superpowers. It’s nice and pure and Golden Age.

Then as the story goes on we find out — of course — there is a lot more to it than that. That’s what we’re building towards. 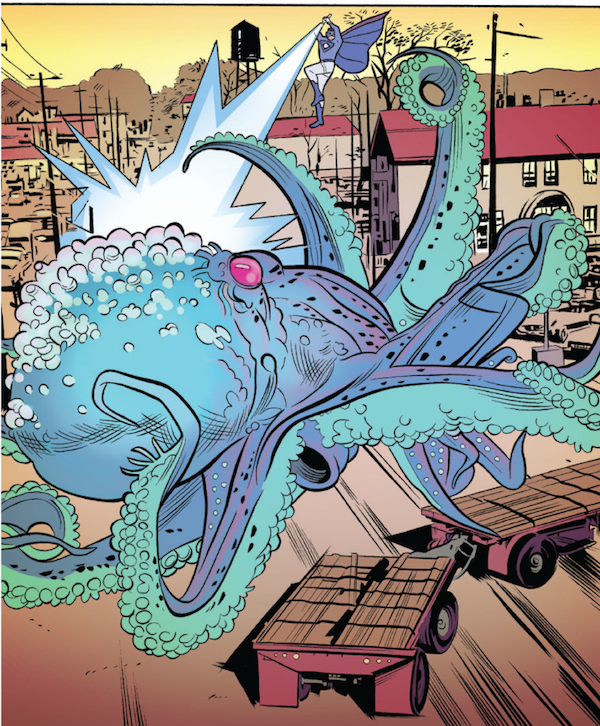 It’s so fun, we’re having a great time with this one. And you end Jupiter’s Circle Book One with a bit of a cliffhanger too, what happens with Skyfox? Will we see more of him?

Oh my God, yeah. He’s a huge character in it. He’s the most fun guy to write. I want him to be someone like Oliver Reed. I’m not sure how familiar you are in America but we had a lot of brilliant, hell raising actors here, Richard Harris, Oliver Reed, Peter O’Toole. They were as famous for their drunken nights out as what they did on camera.

To see him turn, to see the Batman in the thing, the most dangerous one, the swaggering guy, to see him turn, and to see it slowly happen for these reasons, its actually really scary.

I’ve just finished Book Two just now and the stuff with Skyfox is some of my best stuff I’ve ever done. I’m actually really delighted the way it’s come out. He is going to be a very special character I think.

Hit-Girl was my favorite character up until then now I think he’s replaced Hit-Girl for me.

Mark, its been an honor to talk to you!

Cool, and thanks for taking the time as well, that’s great thank you!.