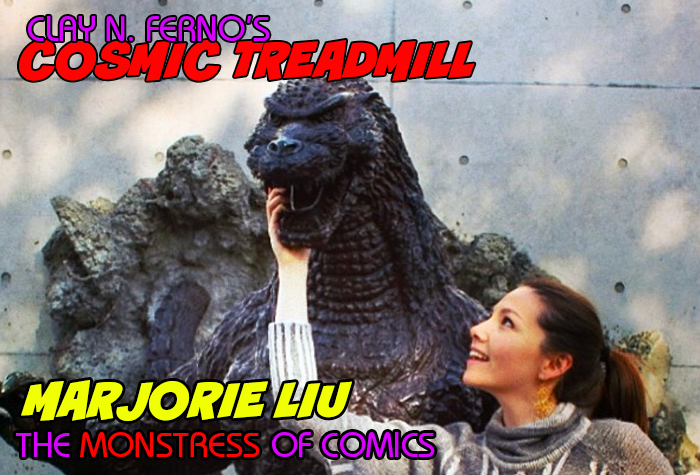 With signings in Boston and New York this weekend for the highly anticipated Image Comic book Monstress, Marjorie Liu took some time to tell us about her latest comics work with artist Sana Takeda. Announced at Image Expo back in January, issue #1 of the art-deco Kaiju monster fantasy book comes in at an impressive 70 pages and fans and professionals are already singing its praises.

Following in the tradition of such high profile creator owned projects at Image like Saga, Sex Criminals, Bitch Planet and Invisible Republic, Monstress is ready to take the comics world by storm. Set in an alternate history of Japan in the early 1900s, Liu and Takeda are ready to transport you there. 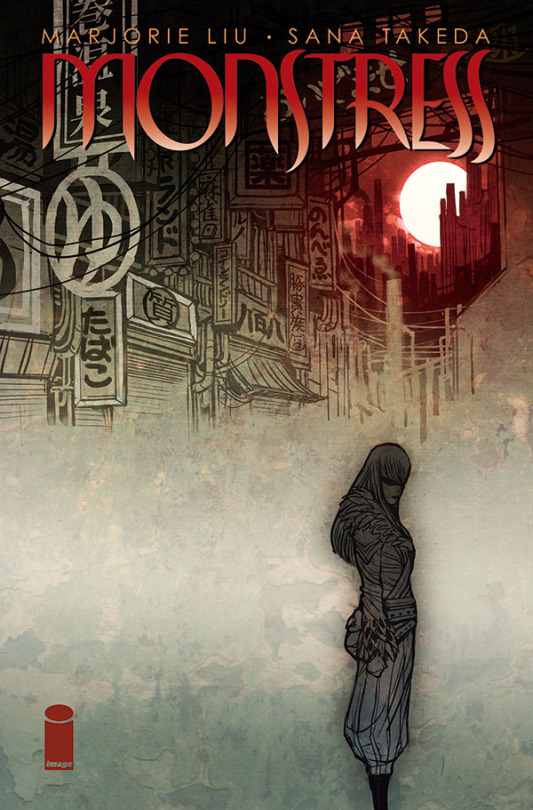 Marjorie joins us today to reveal her Godzilla origins for the book and how these books can encourage young people to use their unique voice in the world creatively.

FOG!: Monstress is the story of a relationship between our hero and a monster. How is Maika connected to this beast?

Marjorie Liu: Monstress is about a young woman, a former slave and the survivor of a cataclysmic war, who is fighting to put her life back together. The problem is that she thinks she’s losing her mind, that she’s becoming a monster. And she is, actually — because there’s an actual monster inside of her. A creature bonded to her soul that is slowly waking and taking over her mind and body.

These pages are gorgeous; how great is it to work with Sana Takeda (Ms. Marvel, X-23) again? How is the art affecting the story, meaning how much influence does Sana have on the final product and your writing process.

Sana is the best, hands down. An immense talent, and a wonderful human being. Early on, her designs for the monsters completely altered the way I was thinking about the story — she gave me some incredible sketches and I immediately shifted my focus, and took the book in an entirely new direction.

I can imagine your previous working relationship is building a strong bond and you will both remembered for your work together. Do you like the nature of collaboration the comic provides, or do you approach writing comics the same way you write prose?

There’s no way I could approach writing comics in the same way I write novels. They’re such different creatures. With prose, I’m completely immersed in the world and characters. Everything the reader experiences about the story has to be built upon words. Comics, however, belong to a visual medium — I may be just as immersed in the story, but the artist brings it to life. Which means, at a certain point, my involvement ends and I hand the story over to another — in this case, Sana Takeda, who takes over where I leave off. Novels can’t exist without a writer. But comics can. What they can’t exist without are the artists. 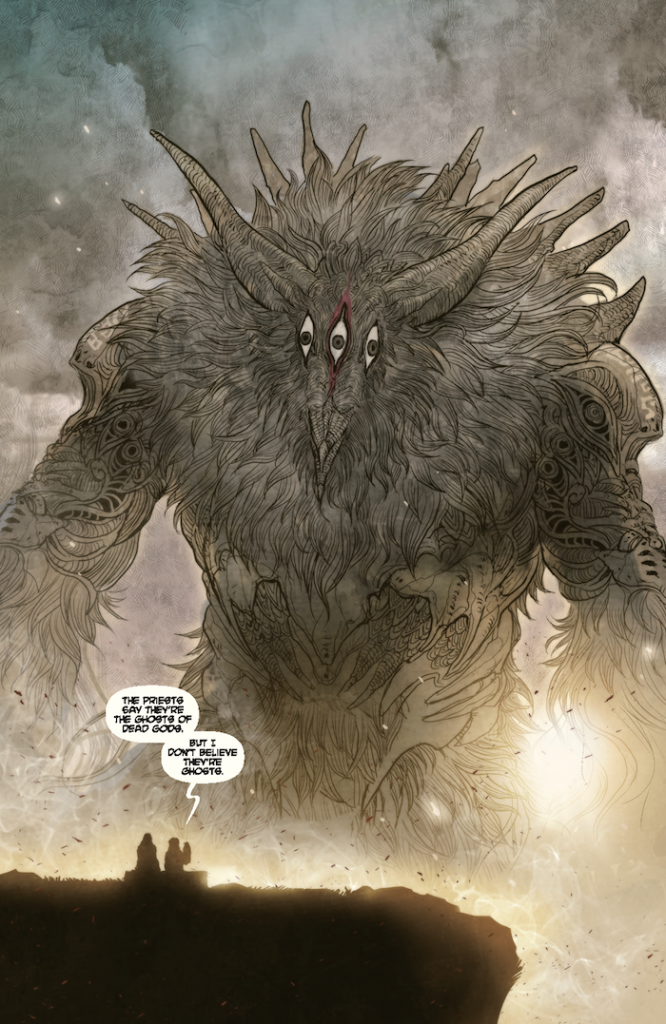 You might be sick of telling this story but I’m fascinated by the connection between Godzilla and your book Monstress, Care to tell our readers about that?

Ha! I’m not sick at all of this story. I was in Japan, being a tourist, and visited Toho Studios in Tokyo. Toho, if you don’t know, was responsible for Godzilla — and they’ve got a seven foot tall statue of him just outside their front gates. I saw that thing and went wild, ran up, posed to get my picture taken — and thought, “Man, wouldn’t it be cool if Godzilla was my friend?” That was one of the sparks that led to Monstress.

I’m intrigued and excited about the launch of this book. While some books on the market are $4.99 for 22 pages, your issue #1 is nearly 70 pages and is at the same price. What went behind making that decision? You are releasing either 3 issues at once or half a graphic novel. How many issues are you plotted out for?

I know how the series ends, but just not how long it’ll take to get us there. 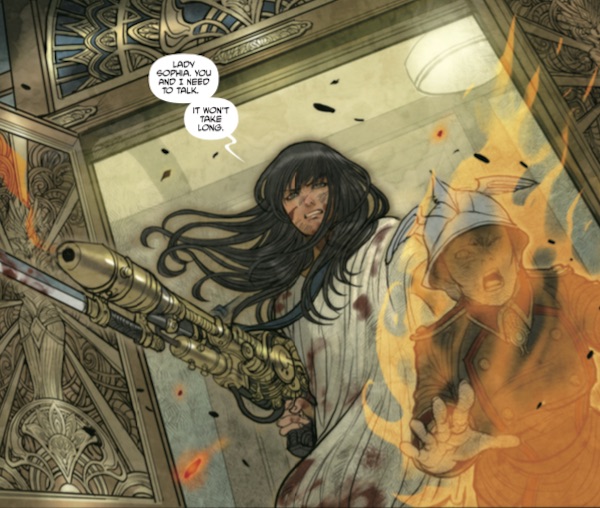 That said, this book isn’t going away any time soon. As for the decision to make the first issue that long, and for that price? Well, it wasn’t as difficult as one might think. There was no natural break in that first issue — I wanted to give readers a full look at what this story is about — but I also couldn’t just charge an arm and a leg for it, either. People don’t have that kind of money.

Early praise and support from creators such as Gail Simone and Jonathan Hickman (to grab a few from Twitter) and this was one of the most talked about books from Image Expo on announce. How are you feeling about the fan support and the reaction to Monstress so far?

I’m so honored and grateful — and deeply humbled. This is a new adventure, one with a lot of uncertainty. I’ve been so focused on writing this book that I haven’t really taken the time to sit back, take a breath, and look around. I’m just beginning to, though. Readers, retailers, my peers — all their support has been beautiful, and the whole Monstress team appreciates it from the bottom of our hearts.

Me, I just want to hug everyone. 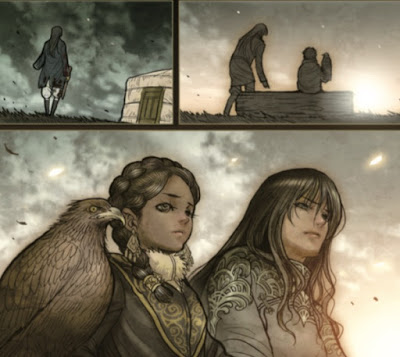 What kind of an example can Monstress set and inspire young girls to get into comics writing, art or fantasy?

It’s so important for girls and young women to know that there’s space for them inside this industry. Not only space, but a need.

We need them, we need their stories, their imaginations, their lives.

We need them to get involved in comics, in storytelling, the arts — we all suffer for the lack of their voices.

That has to change, and it is changing — bit by bit.

But that’s also part of the reason I love to teach. I lecture at MIT on comic book writing, and for the last two years most of my students have been young women.

They might not ever work in comics, but if I can encourage them — even a little — to think about the possibility of using their voices in new ways, then I’ve done my job. 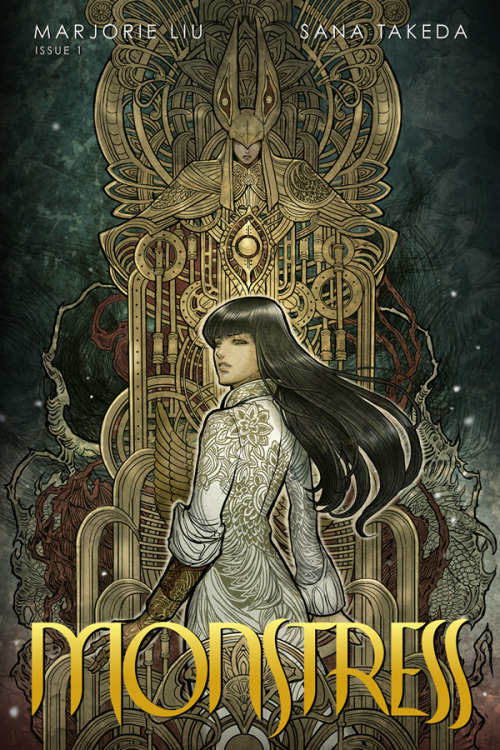