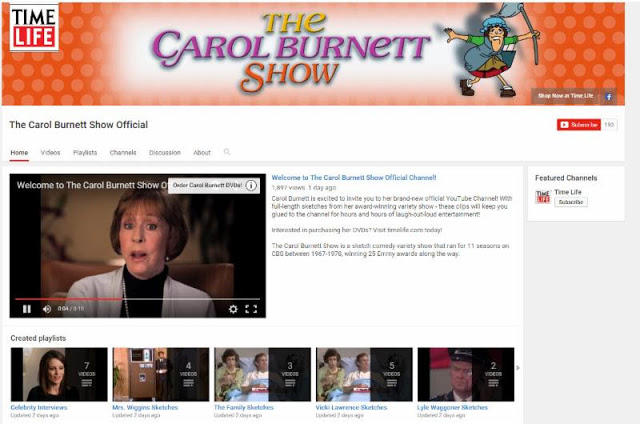 The channel will launch with more than twenty full-length sketches featuring the whole gang – Carol Burnett, Harvey Korman, Tim Conway, Vicki Lawrence, and Lyle Waggoner – in “Tudball & Wiggins,” “The Family,” “Carol and Sis” and “The Oldest Man,” with hilarious crack-up moments throughout. Additionally, fans will be treated to celebrity interviews and more at youtube.com/carolburnettshowofficial.

Each week throughout the holiday season, Time Life will offer the gift of laughter with new full-length sketches and custom content posted on Carol’s #FavoritesFridays.

Since 2012, Time Life has delivered one of the 20th century’s most beloved and talented comedians with acclaimed home entertainment sets from The Carol Burnett Show. Aside from launching the series’ official YouTube channel this fall, Time Life is currently distributing DVD collections from the earliest years of the show with THE CAROL BURNETT SHOW: THE LOST EPISODES. Featuring original broadcast episodes from Seasons One through Five (1967-1972) hand-picked by Carol herself, these true treasures from the vault, not seen since their original airing more than forty years ago, reveal the very first steps of a TV icon.

The Carol Burnett Show: The Lost Episodes Ultimate Collection, priced at $200, includes 22 DVDs, over 20 hours of specially created bonus programming, a collectible guest book and more. With the VIP Edition (priced at $400), Carol will custom hand-sign the cover of the guest book. Each VIP Edition will be numbered and arrive with a Certificate of Authenticity. All The Carol Burnett Show: The Lost Episodes collections arrive with numerous specially produced extras including: