A few months back, I reviewed American Hot Wax, Floyd Mutrux’s failed 1978 biopic on legendary Cleveland disc jockey, Alan Freed. Though Mutrux’ film contained real life rock and roll pioneers, Chuck Berry,  Jerry Lee Lewis, and Screamin’ Jay Hawkins as well as an excellent performance from Tim McIntyre as Freed, the film’s too loose narrative structure and poorly drawn characters, mixed with flat TV movie visuals killed the film’s energy, making for a pretty mess of a film. I must admit that part of my dismissive review of American Hot Wax was fueled by the film’s release during the 1950-early 1960s nostalgia craze that engulfed American theaters in the mid to late 1970s.

After the runaway success of George Lucas’ 1973 music-filled sentimental car romp through Downey, California, American Graffiti, Hollywood seemed like they couldn’t get enough slicked backed haircuts, cute teenage boys and girls, and classic rock and roll blared through car stereos, so they set out to produce as many stories from that era as they could, but what didn’t come along for the ride was the neo-realist style of Lucas’ film, which is its finest quality.

The subsequent nostalgic films after American Graffiti relied heavy on cheese and tunes but were mostly rigidly structured narratives for ABC Sunday Night Movie of the Week releases that played out like long episodes of Happy Days. As for Lucas, I often wondered: why would this gadget-obsessed USC graduate, whose feature film career began with the clean Kubrickesque science fiction visuals of THX 1138, follow up his debut with the neo-realism of American Graffiti?

I write “notorious” in describing Dusty and Sweets McGee because the film’s legend has long preceded it because of Warner Brothers’ stark action of pulling it out of theaters a week after its release.

As Mutrux’s film was not given the chance to succeed and was also packed with enough doo-wop and rock hits that would incur massive clearance rights issues, the film would remain in the vaults for over twenty years until successful retro screenings in the mid-1990s created a demand that encouraged the studio to strike a few prints.

It is rumored that Warner Brothers objected the non-judgmental treatment of the heroin use that the main characters in the film participate in throughout the film, and yes, there is a lot, and it is out there for all to see. Dusty and Sweets McGee, shot in a faux-documentary style, follows an group of unrelated Los Angeles heroin junkies, dealers, and hustlers (mostly non-professional actors) through a weekend where they talk about their love of horse and the problems that have beset them, which doesn’t play out entirely as a cautionary tale.

At the blurred center of the film is Mitch and Beverly (“Dusty and Sweets”) who lie around various LA motels, jamming each other with needles loaded with opiates in long deliberately harsh scenes as they berate one another in a way that would make Sid and Nancy wink with approval years later in the Chelsea Hotel. A few years younger than Mitch and Beverly are an angelically sweet looking couple, named Larry and Pam who also have a love for the needle. Nancy is also strung out but alone in a room with nothing but four walls and a bed. We also hear from Tip, a low level criminal who professes his love for heroin and crime directly into the camera, and Kit, a confident hustler from NYC.

Their lives play out over a weekend while famed LA radio DJ, Arnie “Woo Woo” Ginsburg plays the golden oldies ranging from The Marcels to Gene Chandler to Del Shannon…gleeful songs that play over the muted conversations of broken young people, which given the dire situations of the lives, darkly delineate the era they live in from the era that those songs originally played in that brought joy to the boomers who were looking at a very bright post World War Two America. Also cleverly added into the soundtrack at key moments in the film are contemporary songs such as Van Morrison’s “Into the Mystic” and  Harry Nilsson’s “Don’t Leave Me Baby,” which immediately bring the viewer back into the characters’ reality. Much has been made about the soundtrack construction of American Graffiti in that songs were laid out prior to the screenplay and that scenes were created in the timeline using the soundtrack structure. 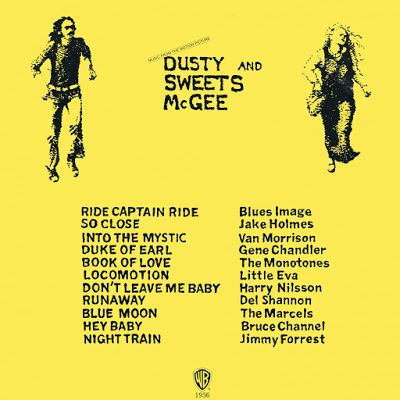 Likewise, the soundtrack of Dusty and Sweets McGee is as integral to the storytelling as it is in Lucas’ film, except that instead of using the sentimentality of the older rock and roll cuts that Lucas employs to create empathy for his characters in American Graffitti, Mutrux uses the same sentimentality here to create distance and, even at times, pity. It is an excellent technique, one that produces a intensive subliminal surrounding that goes beyond the drone of most of Dusty and Sweets’ dialog, which feels completely free form but at times too repetitive. The soundtrack also serves to link the characters in a way that goes beyond their lifestyles and addictions, which, again, could become tedious despite the harrowing nature of their problems.

What also separates this work from the rest of Mutrux’s later films is the impeccable visual style he achieved through an astonishing amount of talent behind the camera that was allowed to work on this low budget film. I imagine that the executives at Warner Brothers most likely greenlit this avant-garde project out of desperation to make any film that related to young people; thus they were willing to give Mutrux some serious talent in the form of cinematographer William A. Fraker, who had just lensed the massive hits, Bullitt and Rosemary’s Baby, and photographers of note, Vilmos Zsigmond and László Kovács.

Together, this visual team created an halcyon like aesthetic for Dusty And Sweets McGee that would rival any film released in the States that year. Like the soundtrack, this almost Malick-esque visual style adds a pathos to the small conversations of the characters within this film, giving their words greater significance as the film maintains an almost playful attitude in the face of all the horrific goings on with its characters. 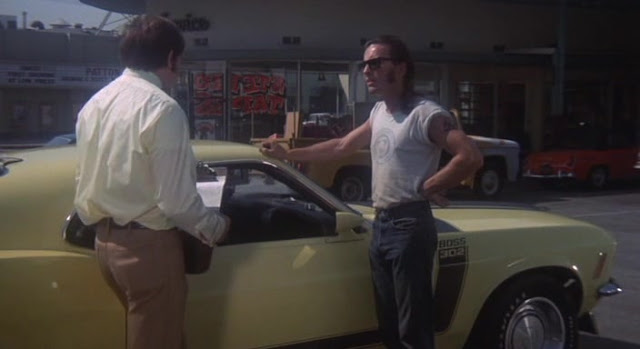 Overall, Dusty And Sweets McGee leaves you with a constant feeling of lost desperation, the same despair our protagonists experience. After the six or seventh time you see Nancy, Mitch, Larry, or Pam slowly stick a needle in their arms, legs, or ankles, you wring your hands with realization that the only way their situations will change is through an overdose, which you know will befall one of these kids before the credits roll.

This is hardly Scared Straight, but I can’t imagine that anyone at Warner Brothers thought that this film would encourage the use of narcotics in any way, despite its claim that all of the characters are real. As Dusty And Sweets McGee in no way glamorizes the use of drugs, I theorize that execs at Warner Brothers were just not prepared when they saw the faces of their own kids when looking at Nancy, Mitch, or Pam. Like Richard Pryor once said, “They call it an epidemic now. That means white folks are doing it.”

Though Dusty And Sweets McGee was yanked after only a few days in theaters, it now remains, after its re-release, as a strong document that looks at a lost generation of kids at the tail end of the hippie movement and as a well crafted film that perhaps inspired more than a few young directors like Lucas to work within that same exciting neo-realistic style until the blockbusters took over and made selling a soundtrack more important than creating a soundtrack that builds a world.