Sometime during the late spring of 2007, my friend Michelle and I hoofed it over to the Brattle Theater in Harvard Square to check out some of their Grindhouse series that they had programmed following the popularity of the recent Tarantino/Rodriguez double feature film experience that revived interest in the exploitation films of the late 1960s and 70s.

The day we decided to head over to Cambridge was a way too pretty Saturday afternoon to see a nasty giallo, but such things like a clear sky rarely matter to horror fans, even fans who had just spent the last few months buried under New England snow and grey skies.

Also, what helped me convince Michelle to head to the theater that day was the opportunity see a 35mm print of Shock, the last feature film directed by the father of giallo genre, Mario Bava.

Before he became a pioneer in Italian horror, Bava started his film career assisting his father Eugenio at the special effects department at Benito Mussolini’s film factory, the Istituto LUCE, before becoming a cinematographer himself. Bava had lensed over twenty films before getting his first opportunity to co-direct when director Mario Camerini needed an AD for his sword and sandal film, Ulysses, an Italian production that starred Kirk Douglas.

The next year, during production of Riccardo Freda’s 1956 film, Beatrice Tenci, Freda and his friend Bava discussed the possibility of making a horror film, which would be the first Italian horror film of the sound era, as the genre had been banned in Italy throughout the 30s and 40s.

The pair negotiated a production deal with Studio Titanus, provided that they could write a script in a few days and have the film done in two weeks to which they agreed, and I Vampiri was born, a nasty low budget film centered around the murders of young women who are found drained of their blood.

Though I Vampiri did not perform well at the box office, it wasn’t met with huge opposition either, despite the film’s carnality, so the door was now opened for the horror genre again in Italy.

For a few more years, Bava would shoot several more gladiator films, but in 1960, he would have the chance to direct a loose adaptation of Nikolai Gogol’s 1865 horror story “Viy” into a feature film, the outrageously gory La maschera del demonio (Black Sunday), a film so visceral that it it would be banned in England for most of the decade but would help launch Bava as a relevant director of the horror genre internationally. After Black Sunday, Bava would occasionally direct a sword and sandal and even a few spaghetti westerns (Roy Colt And Winchester Jack is a favorite), but it was the giallos that he would master such as Black Sabbath, Kill, Baby, Kill and Bay Of Blood.

Fueled by the success of the Bava giallos, the genre began to flourish, so by the mid-1970s, there were many directors such as Dario Argento, Sergio Martino, and Lucio Fulci challenging Bava for the giallo crown, and even though Mario would always be regarded as the master, the theaters were packed with competing Italian horror films from younger directors. Jumping genres again, in 1974 Bava would direct the nihilistic poliziotteschi, Rabid Dogs, which had been plagued with production issues that were further exasperated when the film’s producer went bankrupt after the main investor died in a car crash.

Bava would take two years off from directing after the headaches provided by Rabid Dogs, but he would return in 1977 with Shock, a smart, small horror film that would prove that the master still possessed a bevy of technical tricks from all of his years as a cinematographer to scare you senseless. 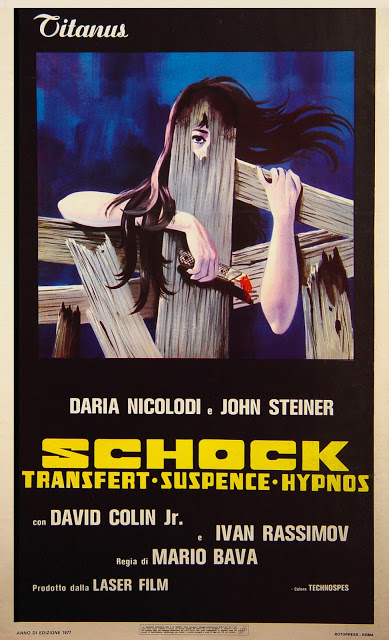 Shock stars Daria Nicolodi as Dora Baldini and John Steiner as her husband Bruno, who begin the film by moving back into Dora’s family home. Bruno is Dora’s second husband as her first, Carlo, died several years prior, and the house has been locked up ever since. Given the circumstances of her first husband’s death and the fact that his dead body had never been located, Dora is not too happy about moving back into the home, and her head is not all together there, since years of drugs and electroshock therapy received during her institutionalization after her husband’s death have left her quite the mess.

Adding to her daily dilemma is that Dora had a son with her first husband, the waifish-looking Marco (David Colin Jr.), who gets along with his stepfather Bruno, but he is still not one hundred percent accepting of this new man who amorously embraces his gorgeous and slightly catatonic mom.

Coming to Marco’s rescue, as the forces of evil always seem to be there to fiendishly assist with the sadness of youngsters, a new friend in the house, an imaginary one, enters Marco’s life, and given that his stepdad is an airline pilot and frequently away, little Bruno spends lots of time talking to his new “friend” and spends much time in the basement where some evil mojo is boiling up in the Baldini home.

What really bumps Shock’s creepiness up to eleven are the incestuous actions that little Marco (or perhaps Carlo living inside of him) begin to take towards his mother. Marco begins by spying on his mom in the shower, slicing up her panties, jumping on top of her and sexually thrusting, and even romantically touching his sleeping mother’s face and neck with a hand that suddenly transforms into that of a rotting corpse, which all perhaps suggest that maybe Carlo is looking for love from beyond the grave?

It is these moments where Marco begins to morph into his dead father that provide the greatest jolts in Shock, including one scene that I will not give away that occurs when Marco runs towards his mother that sent both Michelle and me leaping from our seats. It is the kind of scare that only a master director could imagine, so basic in its visual construction, relying on no special effects, and yet it still scares you silly.

Although the scene that I just described may be the best of the film, Shock is loaded with a ton of smart, visual inventions that make you believe that during the two years that Bava was “retired,” he was compiling his terror filled ideas into a notebook for later use, and I, for one, am so glad that he had enough inspiration to make a giallo, one that despite its modest structure and a surface that looks like another post-Exorcist era possession film, comes off with so many jolts to make it a captivating, haunting watch. Shock’s overall dark tone, a killer fusion score from the Italian/Motown signed band I Libra, and low budget but affecting visual elements make it a fitting final theatrical release for the brilliant Bava, who sadly died of a sudden heart attack in 1980 at the age of 65.

I found out shortly after that afternoon screening that Shock was my friend Michelle’s first Bava film, and she was very impressed. In the seconds after the film, I thought that I should’ve started her out with one of the director’s earlier, more accomplished films, but I soon was confronted with the reality that a giallo from a then 62 year old Bava affected Michelle, who was then a young filmmaker herself, making Shock just as qualified as Bava’s other works.

I have always said that if a comedy without an audience can make you laugh out loud, then it is very successful, and I guess a similar type of success exists for a horror film that terrorizes you on a pretty day.