It is not surprising that the Harry Potter movie series is often associated with the festive period by many.

Maybe this is because they are shown on TV around the holidays, or perhaps it’s because a lot of the titles had mid-November release dates.

But maybe it’s because Hogwarts just does Christmas better than everyone else.

This year I went to the London Warner Brothers Studio Tour, to see what additions had been made to the tour since my last visit a couple of years ago, and revel in all the extra magical seasonal goodies that the studio puts out especially for Christmas.

The instant I saw the simulated snow falling outside, I forgot about the epic hangover that was plaguing me that morning and felt just like the other excited kids running around pointing at things and squealing at their parents (or in my case, a very understanding and patient boyfriend.) 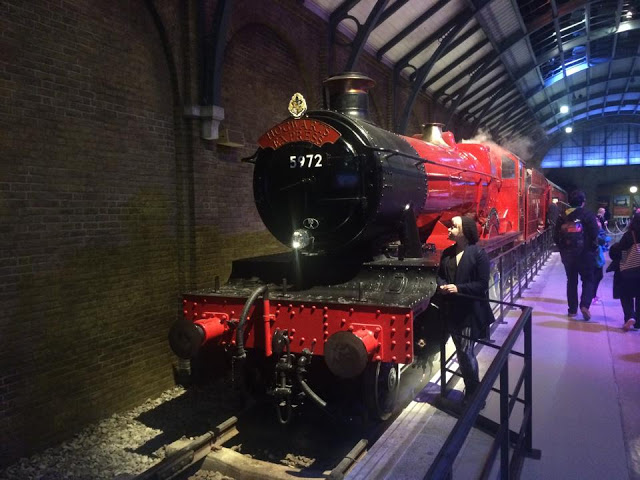 Those that have been to the studio, will know that the first set you visit on the tour is the Great Hall; an 11th/12th Century Romanesque/Medieval Gothic hall, much like that of many of the castles and cathedrals across the UK and Europe that inspired it. As a first look at what is on the cards for the rest of the tour, the grandeur of the great hall makes an excellent first impression. The real stone floor feels so authentic under foot, and the murals on the walls, aged by studio lights look as though they were painted a thousand years ago. 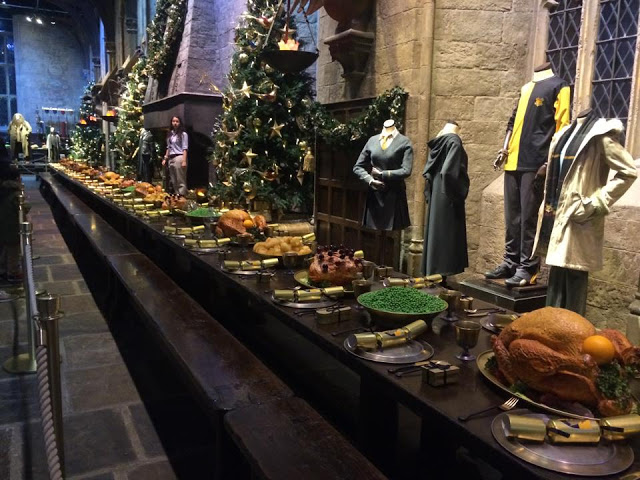 At this time of year the tables are decorated with piles of fake food that would have been used in the later movies to make up a traditional, British, fake Christmas dinner.

Each table’s cutlery, napkins and other decorations are all, of course, themed according to each house’s sigil. The windows have falling snowflakes projected onto them from somewhere beyond the set’s walls, giant wreaths are hung over the fireplaces and huge decorated pine trees stand behind every table, including with a glittery witch whirling around the highest bough of each one.

Perfection to the last detail.

Almost every set throughout the tour had been decorated for Christmas.

In most cases the effort was quite obvious, and the care that had been taken to replicate the feel created by the films was clearly visible. In one set however, the minimal, scrawny strings of tinsel looked a little haphazard and wonky; like they had been thrown there by someone who couldn’t care less.

I was a little perturbed by this at first, and it was only after staring at it with a severely unimpressed look on my face for a good few minutes, that I realised that this tinsel was actually in Harry, Ron, Dean, Seamus and Neville’s bedroom. Had this room been a real life dormitory, chances are the boys would have decorated it by themselves. It certainly had the look of being inhabited by five teenaged boys, down to the crumpled wrapping paper and chocolate wrappers on the floor. 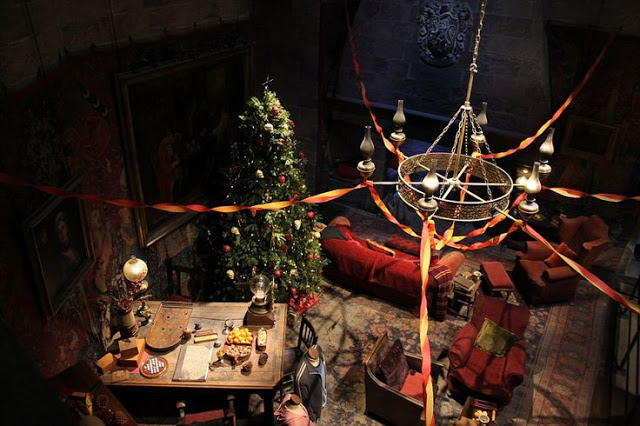 The main festive addition to the sets and scenery, was the snow. It was all over everything. It was even magically falling from the sky in the outdoor courtyard by the studio’s small café; landing on the roof of Number 4 Privet Drive and it’s semi-detached neighbour, the Knight Bus, the covered wooden bridge that leads to Hogsmeade and several chilly patrons clutching plastic cups of sickly, sweet Butterbeer. 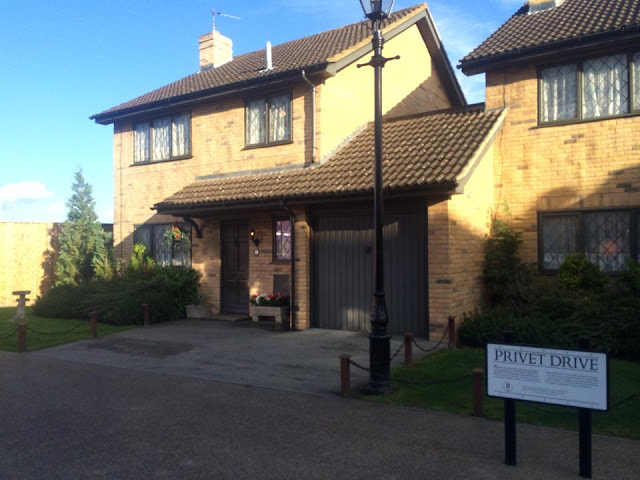 Aside from giving everything it touched a glimmer of Yuletide sparkle, the fake snow used in the film is actually quite interesting, as told by the enthusiastic man at the fake snow stand in the middle of soundstage K (the soundstages are named J & K, purely by coincidence apparently…)

The four types of snow used in the movies, were either made from finely shredded paper, shredded plastic film, an expanded sodium polyacrylate polymer or MgSO4.

The stand had a bucket of each, and some very convincing fake ice made from clear resin.

Looking into the buckets, the shredded paper looked like, well… shredded paper. It was very fine, almost like dust, and very white. But the colour was about the only thing that made it look like snow. Being paper, it’s surface absorbs light, rather than reflecting it, and when you lifted a handful out of the bucket it tumbled like lumpy confetti rather than graceful snowflakes. I couldn’t understand why they would have even used it, and wracked my brains to think of what scenes it might have been used in.

I had overlooked a rather important quality of the paper snow. When mixed with water and sprayed on to scenery and props, it gives a realistic frosty white snow layer to just about anything. Because it’s paper, it’s also biodegradable which means it can be used outdoors without damaging the environment. So obviously, this would be the perfect kind of snow to use on, let’s say, the trees in the Forest of Dean from the Deathly Hallows Part II. 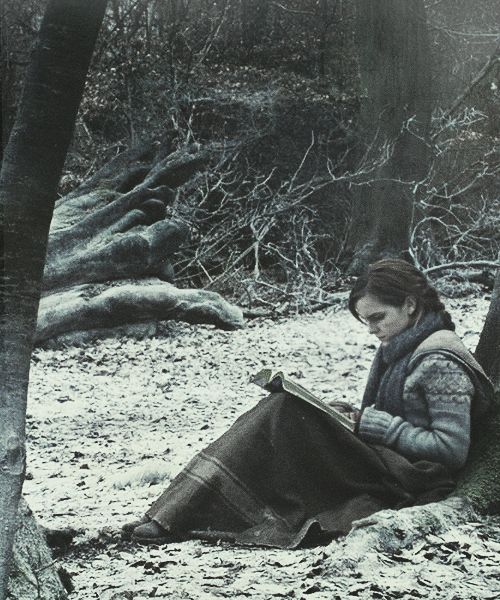 The shredded plastic is a much better looking snow than the paper. They way it falls is very similar to real snow, and it has just the right density to be blown around by wind or even gusts created by passing billowing wizards’ capes. This makes it a good material to demonstrate falling snow with, but it’s also great for dressing scenes that call for some dramatic interaction from the snow caused by the actors’ movements.

The main drawback is that it is of course plastic, and therefore not safe to use outside at risk of damaging the environment. So although it does look better, it’s a little limiting in that it can only be used on set and not on location. 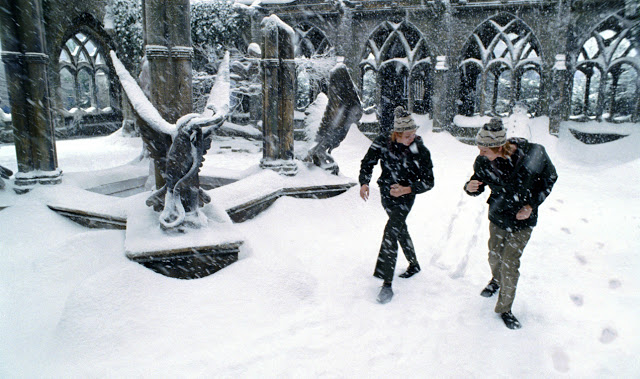 MgSO4, also known as Magnesium Sulphate or Dendritic Salt is kind of similar to shredded paper in that it does not fall like snow. The salt crystals themselves look a lot like glittery snowflakes, but to be used it has to be mixed with water which renders it too heavy to fall like a snowflake, the white clods just kind of flump to the ground like mashed potatoes. It does look and feel a lot more like real snow however, it clumps together just like the real thing and even squeaks under the pressure of a footstep. This makes it ideal for authentic interaction with the characters and their movements on a Magnesium Sulphate covered floor. 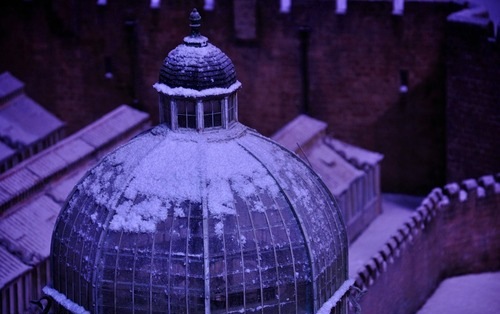 This is also the chosen medium to decorate the giant 1:24 scale Hogwarts castle model. The crystalline ‘snow’ is made to the right consistency and sprinkled by hand over all the details in varying thickness depending on the location of that part of the building.

Sodium polyacrylate is created when sodium salt and polyacrylic acid combines to make a polymer, which again requires a little water for it to become ‘snow.’ When the super absorbent polymer gets wet, it expands up to 40 times it’s size and looks a lot like real snow. Even the wet yet fluffy texture is similar to snow, unlike the dry magnesium sulphate salt or shredded paper and plastic. It’s the most common way of creating snow on film sets, and it’s even used on artificial ski slopes.

It looks great, is very cheap and easy to get hold of and you can even make snow balls out of it!

Another snow demonstration that was going on at the studio revealed how they created the footsteps appearing in the snow from under the invisibility cloak.

Naturally, I assumed this was a visual effect created post production, CGI and other digital wizardry. But, I was completely wrong. It was an entirely practical effect, like a lot of the other moving ‘as if by magic’ props from the movies. Under the snow were a series of mechanical footprints, that retracted in sequence forming a Harry’s foot-sized recess in the snow. The footprints were controlled remotely and triggered by the flick of a switch off camera.

The inspiration for the festive decorations in the Harry Potter films come from the descriptions of a very traditional, Victorian Christmas by J.K. Rowling in the series of books.

Decorated evergreen trees, holly and mistletoe, candied fruits, and rich colours. But the snow really steals the show when it comes to creating that Christmas feeling. As Hogwarts castle is in Scotland, it’s very likely that it would be covered in snow every December. But across the border in the slightly further southern climate of Manchester, North West England, snow on Christmas is a romanticised rarity.

If like me you are probably going to suffer through torrential rain for the rest of 2015, maybe you could make your own snow indoors this year now you know how they do it in the studio. 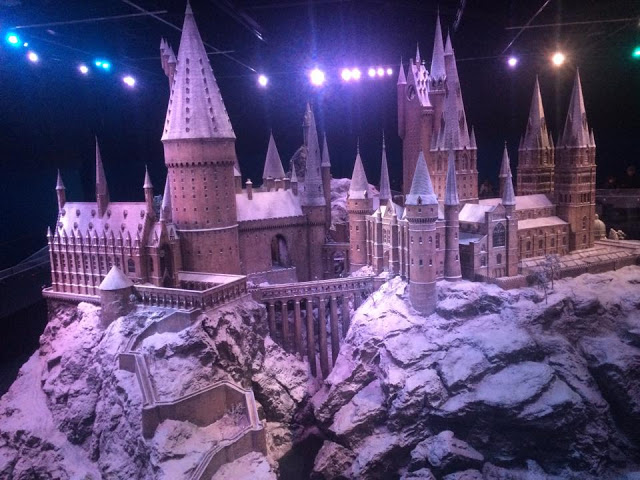