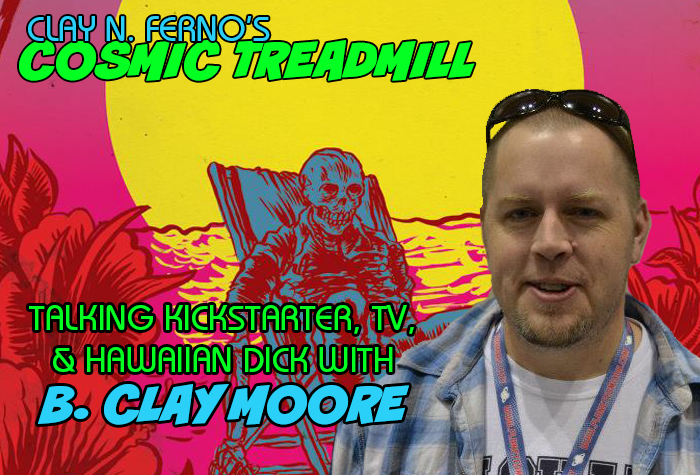 Aloha, comics fans! As if the embarrassment of riches for comic book properties on TV weren’t enough, one of our favorite creators, B. Clay Moore (Bad Karma, JSA: The Liberty Files, Bloodshot) is exercising options that go beyond choosing a banana hammock or full trunks.

In this, our double-entendre dipped interview with B. Clay we get to hang ten on the new Kickstarter for the 100 page hardcover, Great Big Hawaiian Dick.

Get out a tiki glass and enjoy a tall glass of Hawaiian Dick on this cold winter day.

FOG!: Aloha, B. Clay! Thanks for joining us today to chat about Great Big Hawaiian Dick! We can’t avoid the Hollywood news. Tell us about Hawaiian Dick on TV!

B. Clay Moore: NBC has picked up the rights to Hawaiian Dick, and we’re in the process of developing it right now.

Writers Paul Lovett and David Elliott are working on the pilot script as we speak. Among others, Johnny Knoxville is on board to produce the show. Knoxville was attached to Hawaiian Dick years ago when the film rights were optioned by New Line, so getting him back on board was big. 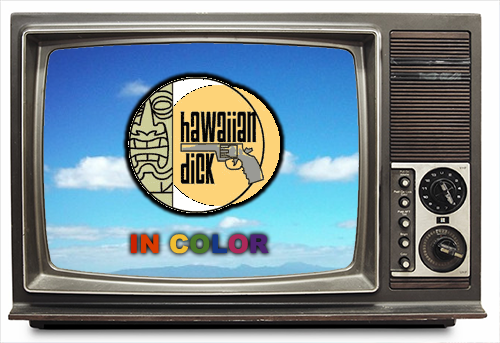 How long have you been sitting on this news yourself?

Well, we’ve been working on the television stuff for about a year and a half. Things really came together in the past two or three months. It’s always hard to sit on news you’re happy to report, though.

On to the Kickstarter — is this a new adventure for Byrd?

This is actually a series of stories starring Byrd and the supporting cast that we’ve introduced over the years, as well as a variety of pieces by various artists. While I wrote most of the stories, I invited some friends to contribute their takes, as well.

This certainly isn’t your first go-around on Kickstarter with you blowing it out of the park with Bad Karma. Why go Kickstarter with Great Big Hawaiian Dick rather than, let’s say put it out at Image or another cool publisher?

First and foremost, this is essentially a Kickstarter exclusive. Aside from copies I’ll hand sell at conventions, the overprint will be very limited.

This is all unpublished material, much of it brand new, but some of it that I’ve been sitting on for a while. With Aloha, Hawaiian Dick debuting from Image this coming spring, I thought I’d put everything together into an artifact of sorts for fans of the book. It also doubles as a great way for people to introduce themselves to Hawaiian Dick.

Aloha is the fourth Hawaiian Dick mini-series, by myself and Jacob Wyatt (with help from artist Paul Reinwand). It’s a five issue arc, and, as I said, it will be out this spring, from Image Comics. It’s a little heavier in tone than the previous series. New characters appear, old characters vanish. Oh, and an old character who had vanished reappears.

At the time of this interview you have already met your Kickstarter goal. Are stretch goals where it is at for you?

Well, we’ve thrown in some stretch goals as a way to thank our backers, but the main goal is to get the book into as many hands as possible. There will be a very low overprint, and the book won’t be offered after Kickstarter through Amazon or Diamond, so we hope people take advantage of the campaign.

Have you seen or been inspired by any movies that closely resemble your 1950s Tropical Noir?

I don’t know about closely resemble, but I’m a big fan of movies that lean heavily on tiki or south seas themes. Fun movies like Donovan’s Reef or any of a number of flicks from the 50s or early 60s. I’m more inspired by noir in its variety of forms, and television. Robert Altman’s The Long Goodbye is a key inspiration, as well as TV shows like The Rockford Files.

What if your favorite tropical drink from the Hawaiian Dick drink guide?

I’m kind of a geek for tropical drinks, and it’s hard to beat the traditional Mai Tai.

Do you still have work to do on these pages or is the book completed to ship on time?

We’re still wrapping up some of the stories, which is why the book is scheduled for an April release. The bulk of it is done, though.

If we top $15,000, we’ll definitely announce a stretch goal featuring as-yet-unseen art and talent. We’re getting closer, and discussing it with someone right now.