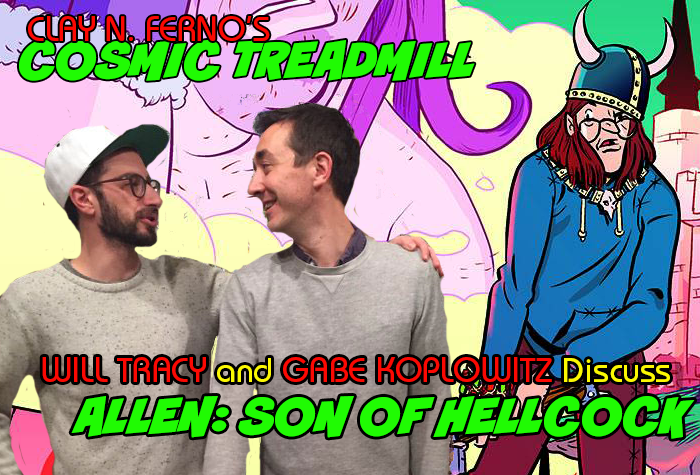 I was at first skeptical to read yet another brightly colored Conan-sword-tale. With space lasers the fashion this week, this seemed like a step backward back in time to a place I didn’t need to revisit.

And the creators are comedians, and we all know how those people are.

This all came to a climax when Z2 Comics forced me at dagger point to read issue one of their Allen: Son of Hellcock to prepare for an interview with their famous funny people Will Tracy (HBO’s Last Week Tonight with John Oliver, The Onion) and Gabe Koplowitz (VH1).

I finally relented. Mead in hand, I had some questions for these guys because I was only two pages in when I realized this might be the funniest book of the year.

Will and Gabe joined us to answer our questions about the new publisher and disappointing the person that brought you into this world. Allen: Son of Hellcock debuts today in stores and digital comic shops.

FOG!: Will and Gabe — thanks for joining us today, what’s going on these days with Allen: Son of Hellcock? How did this come about? Where do you guys know each other from? Do you even know each other?

Will Tracy: I just met Gabe for the first time literally 15 minutes ago, and I can already tell I’m going to hate him. I think it’s his face, voice, and personality that make him hateable. Also his clothes and his smell and his glasses. And his stupid feet and hands.

However, on a professional level, we wrote Allen: Son of Hellcock together about, oh, seven or eight years back. And we could not be more thrilled or proud to see it finally unleashed upon the world this Wednesday, December 16th! 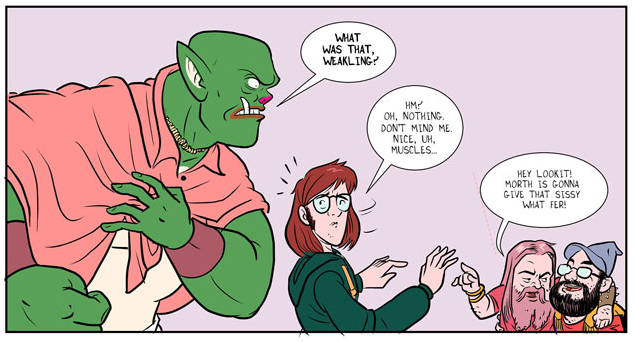 Gabe Koplowitz: Will is probably my best friend. He’s unbelievably kind and supportive, and we have an incredibly smooth working relationship that first started when we went to college together.

…wait, he said what?

You’ve both brought your brand of comedy and satire to swords and sandal comics in a way I didn’t think possible. Does Allen want to make his Dad proud at all, or is Allen just a dud?

Will: Allen would like to pretend he is somehow “above” his father’s bare-chested pomposity and legendary feats of combat, and he’s certainly tired of being constantly compared to his old man. But deep down, whether he admits it or not, of course Allen wants his father’s approval. It’s Hellcock, for heaven’s sake!

Z2 has been reinventing itself and trying to stick out from the competition with great new books. Did you guys pitch this idea to Z2?

Will: Yes, indeed! In fact, the moment I saw Josh Frankel’s press release announcing the launch of Z2, I made it my mission to stalk the guy like a jaguar stalking a wounded gazelle. The guy’s taste was impeccable, he’d already lined up work from awesome talents like Paul Pope and Dean Haspiel, and he was committed to making smart, creator-owned, beautifully curated comics. Plus, he has a corgi named Momo, which certainly sweetened the deal in some way.

I really love the look of the book and the characters. There is as much of Adventure Time as there is Conan The Barbarian to the look. Did you work on the designs with Miguel Porto or let him go nuts? 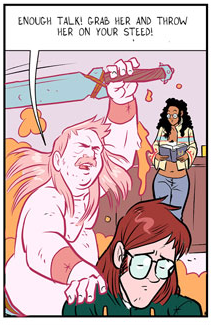 Will: An equal mixture of the two! We definitely did a lot of back and forth consultation on character designs for the major characters, and gave very detailed notes in our script regarding design, background detail, visual gags, and atmosphere. But then Miguel took those notes and went the extra mile, adding all sorts of crazed, absurdist details we never could have dreamed of.

Our biggest goal for this book was to really and truly make the reader feel as if they were stepping into a world, one with its own sense of order and logic. Miguel’s the guy who ultimately made that happen.

How did you come across Miguel for the art?

Gabe: I stumbled across a few incredibly beautiful drawings by Miguel on a blog (you may know it as a “weblog”) shortly after we starting writing the comic, and we fell in love with his stylized, cartoonish art. It was bright, whimsical, and we thought it would be a really fun, unexpected way to go for a fantasy comic. Thankfully, Miguel agreed! 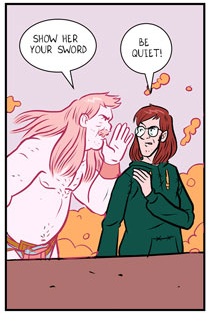 Will: Disappointing my father is, frankly, easy and so second nature to me that it’s hardly a challenge, anymore than, say, breathing would be a challenge.

That being said, embarrassing my father in the eyes of his friends and colleagues is also pretty much a walk in the park for me, and is something I do regularly and with considerable relish.

So neither is definable as a challenge, to be honest. I would say the only true challenge is convincing either of my parents, or really anyone I am in any way acquainted with, that I am an actualized human adult male with feelings and integrity.

Gabe, you want to back me up here?

Gabe: Not really, no. I think you nailed it.

How many issues can we expect? Is this ongoing?

Will: I think we’re looking at 5 or 6 issues to wrap up this story, followed by the compiled trade edition. From there, who knows, more tales from the world of Hellcock may one day arise!

Gabe: Put it this way: by the time we’re done, you’re going to be very, very sick of us.

Any more comics projects in the works?

Will: There has been much heady talk of an absurdist space opera, but you know Gabe and me. We’re all talk.

Gabe: We’re also working on a comic adaptation of the atmosphere. 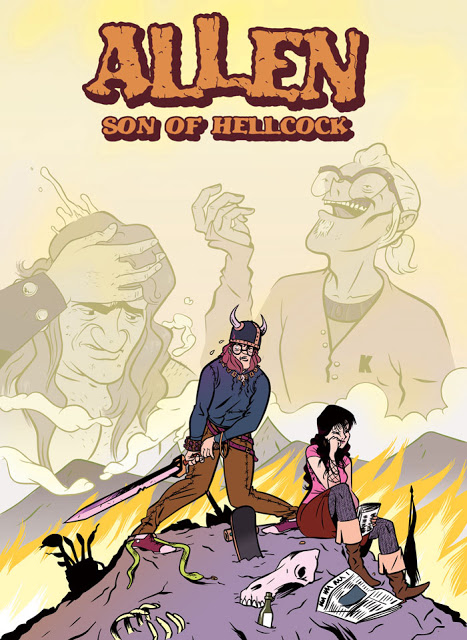