I’ve been putting this off. Gotham’s mid-season finale has come and gone and you probably haven’t given it a second thought since. No, you’re now all watching It’s a Very Murray Christmas or posting tributes to the late Scott Weiland.

Or maybe that’s just me.

The truth of the matter is, I don’t watch Gotham anymore for mild entertainment. I do so out of obligation. Everyone who knows me knows that I’m a Batman fan. So if they tune in to Gotham and it comes up, they want to know what I think. So I should have an opinion, right? Well here it is:

Gotham is better this season than the last.

But that doesn’t make it essential viewing.

I went weeks without watching an episode and did not miss it. Partly because life got in the way and I had more important stuff take priority, but also partly because it’s not a show that commands your attention.

Sure, there are enjoyable moments to be had. Seeing Bruce and Selina’s relationship continue to take shape is fun to witness. Mostly because Bruce is finally turning into an interesting character. His character shift from an innocent victim to a calculating mind is now underway and it’s about time. For the first time ever in the show’s run I can say that Bruce now feels like Bruce, but seeing as this isn’t his show, it just took some time to get there. 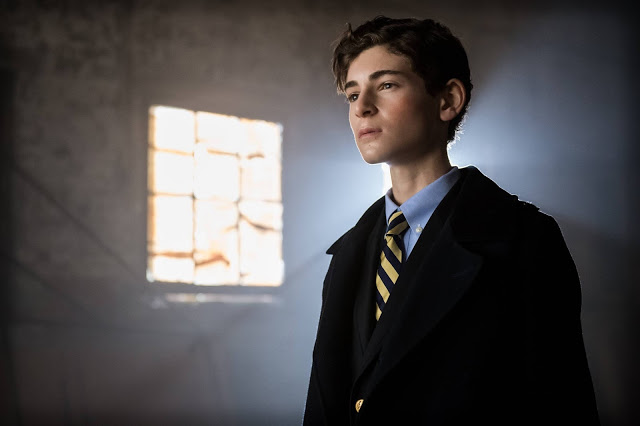 While Bruce and Selina’s relationship may have taken a turn for the better, the same can’t be said for Penguin and Riddler. Their one and only interaction last season was so cringe-worthy in the way it pandered to the audience that I hoped to never see them cross paths again.

Well, unfortunately FOX didn’t read my review of that particular episode. Either that, or they did and want to torture me. The bromance that has developed between these two is just the worst. It feels more cartoony than a cartoon (especially if we’re talking Batman the Animated Series). It makes sense why they did it. Each of their supporting characters are now dead so it only seemed fit to pair them up. And sing songs together. I wish that were a joke. 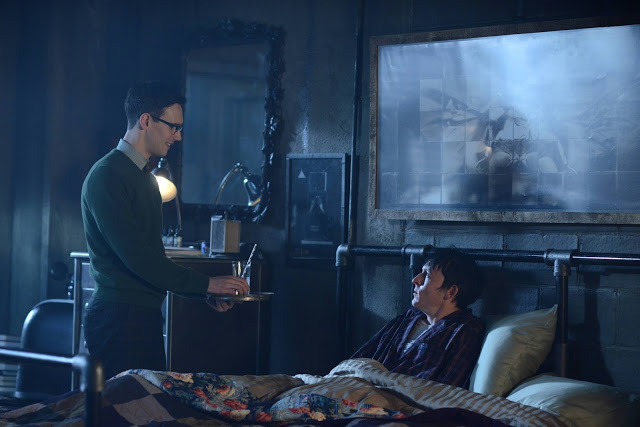 Penguin is a character who, last season, I looked forward to the most for his scenes. He was compelling and dangerous and I enjoyed watching his rise. Now he has become a whiny mama’s boy who I find a tad irritating when he’s on screen. What happened Penguin? I used to save this kind of disdain for your pal, Riddler.

Speaking of Ed, he’s gone full on psycho this season. He already took a big step in that direction last season by taking his first life and now his death toll is up to three, one of them being the love of his life. Which isn’t such a bad thing. That storyline was starting to feel like it was on repeat. Now he can turn his attention to singing show tunes with his new roomie, Penguin. I miss Ms. Kringle already…

Gordon has had the most development out of anyone this half season in that he went quickly from the new commissioner’s golden boy, to fugitive by the end. It’s a bit strange to see him portrayed as riding the line and aligning himself with Penguin as frequently as he does. Their relationship made sense in that sometimes Gordon needed to allow Penguin to operate and would bend the rules as the ends would justify the means, but now we’ve reached a stage where he outright breaks them like his partner Harvey “It’s Gotham” Bullock. 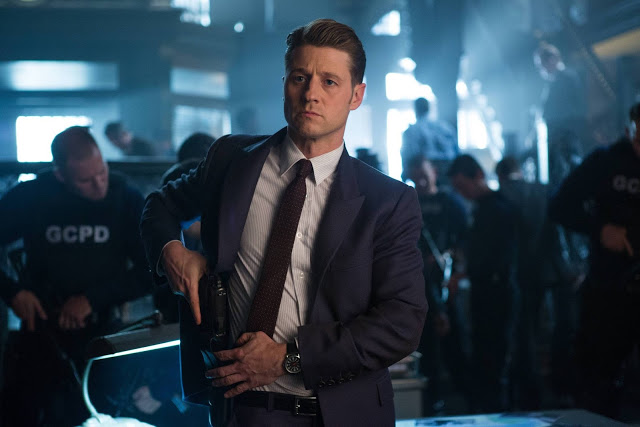 Bullock is no stranger to murdering if it suited the situation, and he’s no bad guy, but I liked that he represented a path that Gordon could take if he weren’t a good cop trying to do the right thing. The path that he’s now chosen shows that Gotham has broken him. And it didn’t take long.

The most character defining moment for him is when he has a chance to murder a hired assassin who was after him and in pursuing him murdered some fellow officers. Gordon comes this close to pulling the trigger. He pulls back from crossing the line and in doing so, another one of his recruits is killed by the man. Gordon naturally blames himself. So when Theo Galavan is once again at Gordon’s mercy, despite the fact that he was determined to bring him to trial, this time he does exactly what Penguin wants and puts a bullet in his brain. 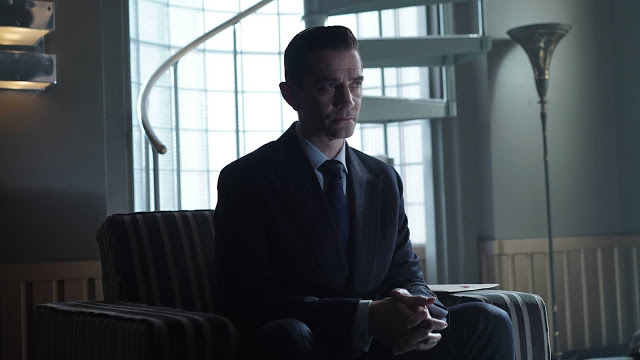 At this point, the only difference between Gordon and Penguin is one of them has a badge. Penguin may have a bit more blood on his hands, but Gordon is quickly catching up. So I guess they’re painting Gordon as an anti-hero to give him a little edge? It’s hard to buy that this is the guy that Batman would later form an alliance with. Maybe he will change his ways and redeem himself as the series goes on, but as of now, he’s a crooked cop, and Batman has no tolerance for those.

Neither did Gordon, once.

There’s nothing to keep him and Lee together except for the fact that she’s now pregnant, which by the way was such a causal revelation, I almost forgot about this development. As a result, Gordon proposes. We’re only in season two and we’re already pulling out the wedding and baby plot lines? Aren’t those the signs of a show struggling for ratings? If that’s the motivation behind it, well good luck I guess. Feels more than forced to me. 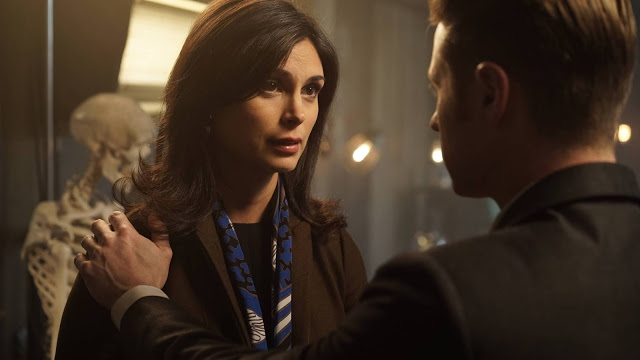 I think that about covers it except for Theo Galavan, the big bad of this half season. I guess you could classify him as a Gordon villain, because he’s definitely not a Bat villain, and now he never will be. He didn’t really amount to much when all was said and done. I’m definitely glad he’s gone as he wore out his welcome after only a few episodes in. I hope the villains get more engaging than this during the latter half of this so-called “Rise of the Villains” season.

As a teaser for what’s to come, we catch a glimpse of Captain Cold who turns some poor Gothamite into an ice cube because that’s what he does. They’ll try to tell you he’s Mr. Freeze, but trust me, I know Captain Cold when I see him. 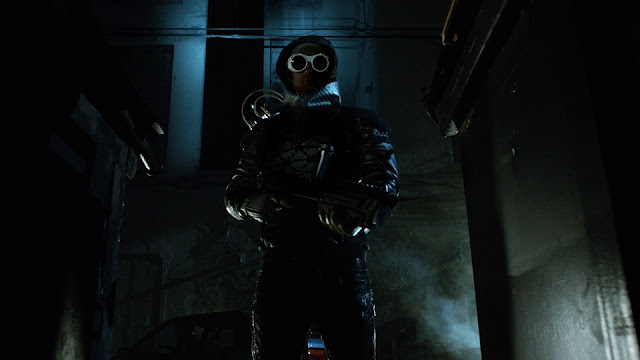 Where’s the Flash when you need him?

Also did anyone catch that Aquaman Easter Egg in the form of a billboard that reads Trident Intercontinental Shipping? 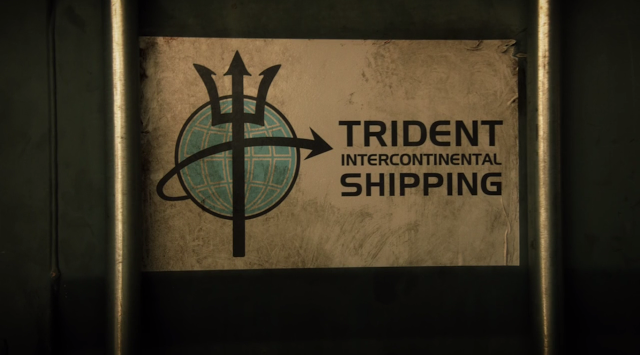