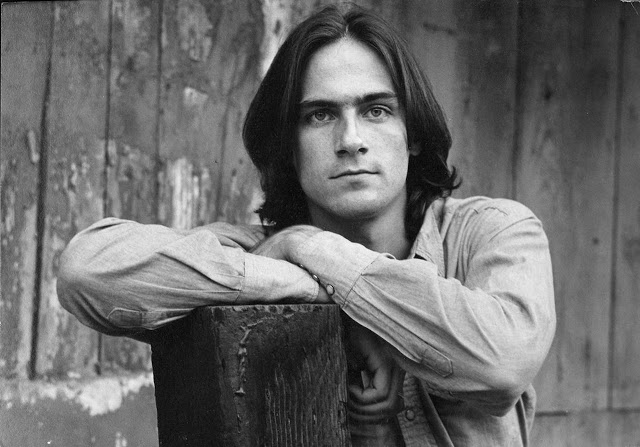 James Taylor is an icon.

James Taylor’s Accomplishments
With a career that began in the mid-1960s, Taylor has sold more than 100 million records.  That’s an amazing feat considering he’s only sent one album and one single to the top of the charts.

In 2000, Taylor was inducted into the Rock and Roll Hall of Fame.  He’s also a member of The Songwriter’s Hall of Game, the North Carolina Music Hall of Fame, and the Hit Parade Hall of Fame.

His 1976 Greatest Hits album has been certified Diamond by the RIAA.  Diamond certificates are awarded to albums that sell more than ten million copies.  Taylor’s Greatest Hits has actually sold in excess of 12 million units.

Taylor has sung The Star-Spangled Banner at the World Series and the NBA Finals.  He’s appeared on Saturday Night Live, The Simpsons, Sesame Street, and The West Wing.  He was also the musical guest on Leno’s “first” final The Tonight Show on May 29, 2009.

Taylor has delighted fans for nearly fifty years with hit songs like “Fire and Rain”, “You’ve Got a Friend”,”Handy Man” and “Your Smiling Face.”

Those impressive accolades fail to convey Taylor’s amazing talents.  Just attend a James Taylor concert and you’ll realize that his voice sounds better live then it does on his recordings. 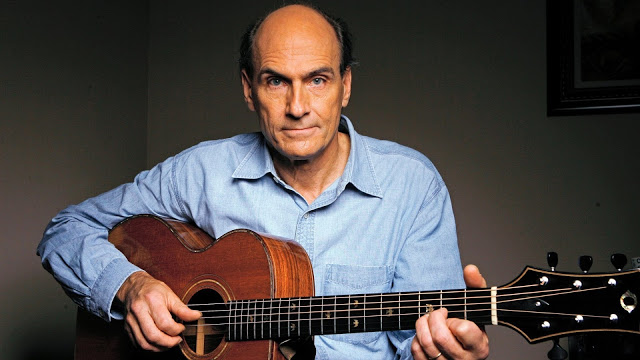 Even more impressive, Taylor has managed to achieve all of the above despite throat surgery, clinical depression (he was institutionalized and missed being drafted during the Vietnam War due to a “psychological rejection”), two heroin addictions, the tragic death of his brother, and two-failed marriages.

James Taylor 2016 Tour Schedule
As things stand now, Sweet Baby James has three dates planned for 2016.  One of those three dates is the 125th Anniversary Gala for Carnegie Hall.  The other two are traditional James Taylor concerts at Fenway Park and Wrigley Field.

Having James Taylor tickets means a lot more than just witnessing an icon in his element. It also means you’re in the presence of a historically (at least popular music wise) important and relevant figure.

The Beatles
Most people don’t know this but Taylor was the first non-British artist signed to Apple Records, the label The Beatles formed in 1968.

Taylor recorded his first LP at the same time The Beatles were making a little record known as The White Album.  Paul McCartney and George Harrison both played on Taylor’s Carolina in My Mind.

A song title from Taylor’s debut album, Something in the Way She Moves, was used by Harrison in his classic Something (which went on to be Frank Sinatra’s favorite Lennon and McCartney song).

Due to his drug addiction, which prohibited him from doing any promotion, Taylor’s debut fizzled.  In 1969 he signed with Warner Bros. Records.

Still, Taylor is a direct link to the greatest rock band of all-time.

Time Magazine
Taylor’s affiliation with the Fab Four doesn’t end there but before discussing that we need to mention his appearance on the cover of Time Magazine in March of 1971.

At the time, appearing on a magazine like Time was a big deal.  People still read magazines in the early 1970s and popular culture/celebrity wasn’t as celebrated like it is today. 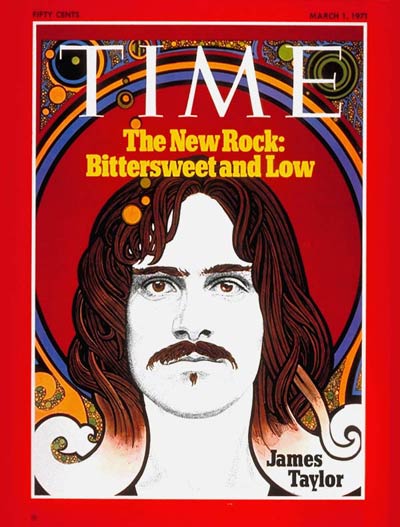 Taylor’s appearance on the cover of Time (via a semi-psychedelic illustration) came in the wake of his successful sophomore effort, Sweet Baby James, and his hit single, “Fire and Rain.”

The name of the article that accompanied the cover was title The New Rock: Bittersweet and Low.  It championed the work of Taylor, Carole King, and Joni Mitchell and told of the public’s changing taste in music.

The turbulent sixties were over and so was that decade’s music.  The softer and more cerebral sound of James Taylor and his ilk were taking over.

The Time magazine cover also underscores James Taylor’s place in the annals of popular music.  He was on the vanguard of what we now call “The Singer Songwriter.”  Sure, Arlo Guthrie and Bob Dylan preceded JT, but they’re more “bards” than anything else.

Taylor is the quintessential singer-songwriter; an artist who sings original songs while playing the guitar.  If it wasn’t for James Taylor there’d be no John Mayer, Ed Sheeran, or Jason Mraz.

John Lennon
It’s probably the worst day in the history of rock and roll, Dec. 8, 1980.  The day Mark David Chapman assassinated John Lennon outside of The Dakota in New York City.

Taylor lived in the next building over and actually heard the shots that killed Lennon.  Taylor explained what he heard as “five explosions.”

As remarkable as that is, it’s not Taylor’s most remarkable connection to that infamous day.  On Dec. 7, Taylor had a terse encounter with Chapman at the subway stop on 72nd street.

“The guy had sort of pinned me to the wall and was glistening with maniacal sweat and talking some freak speak about what he was going to do; it was surreal to actually have contact with the guy 24 hours before he shot John,” Taylor told the BBC in 2010. 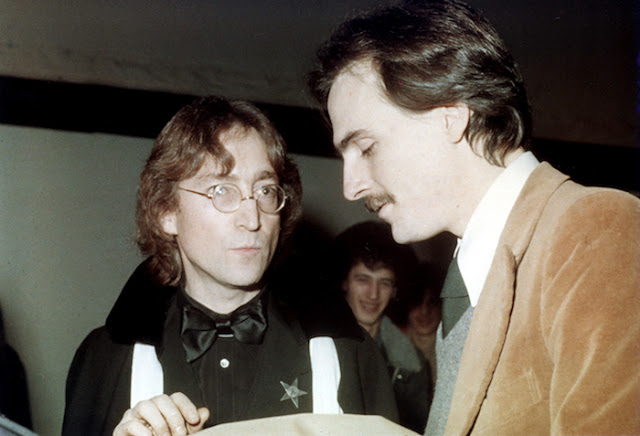