It will take all the efforts of the Justice League – and a few of their super pals – to keep Brainiac from adding Earth to his miniaturized collection of planets in the all-new animated feature, LEGO DC Comics Super Heroes – Justice League: Cosmic Clash. Produced by Warner Bros. Animation, DC Entertainment and the LEGO Group, the film will be distributed by Warner Bros. Home Entertainment on March 1, 2016 on Blu-ray Combo Pack, DVD and Digital HD. The Blu-rayTM and DVD releases will include an exclusive Cosmic Boy LEGO figurine, while supplies last.

The brilliant, hyper-obsessive-compulsive, super-computer Brainiac is combing the universe for new additions to his collection of worlds when he stumbles upon a ripe planet for his taking – Earth. But Brainiac quickly discovers Earth has a “firewall” – the Justice League. When Brainiac cleverly displaces several members of the Justice League to other time periods in Earth’s history, Batman, Flash and Cyborg must build and use the Cosmic Treadmill to race across time to retrieve their comrades – while members of the Legion of Super Heroes attempt to hold off Brainiac’s assault. Only time will tell in this battle for the fate of the Earth and the Justice League! 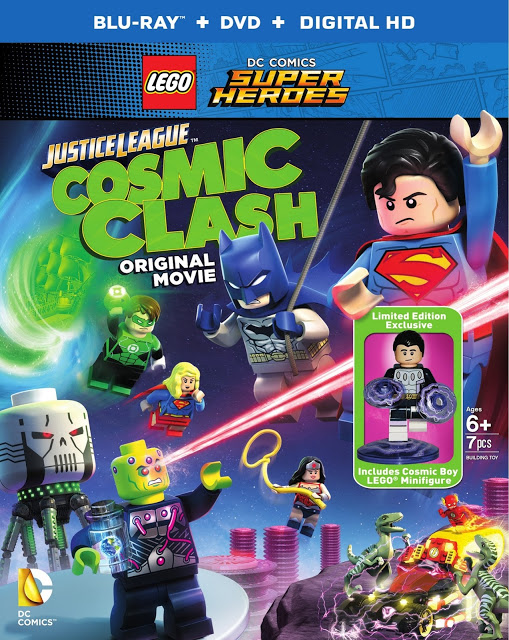