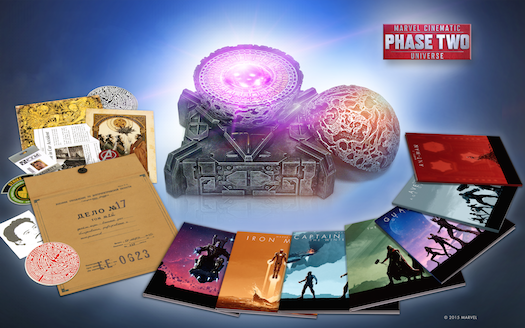 Packed in a replica of an orb containing one of the legendary cosmic Infinity Stones, this 13-Disc set arrives packed with Marvel ephemera including with a gold-foiled page from the book of Dark Elves, an ancient drawing from the Morag vault, Avengers and S.T.R.I.K.E. uniform patches, a replica of the Tony Stark Tattoo from Marvel’s Iron Man 3 plus Blu-ray, Blu-ray 3D and Digital copies of all of the Phase Two films, as well as a bonus content disc with 166 minutes of extras.

One of the most enticing aspects of the set are the new cases featuring new packaging from artist Matt Ferguson.

Check out all of the covers after the jump and, Avengers Assemble!

And the bonus disc…