ShareTweet
Ok, so this may be old news at this point, but it’s the only opportunity I’ve had to let you all know the awesome movies that played at this year’s birthday party for Harry Knowles at Ain’t It Cool News.
I’ll start with the three new ones that are among the five best of the day.
ANOMALISA (2015)
Directed by Charlie Kaufman/Duke Johnson
Written by Charlie Kaufman
Based on a play by Charlie Kaufman 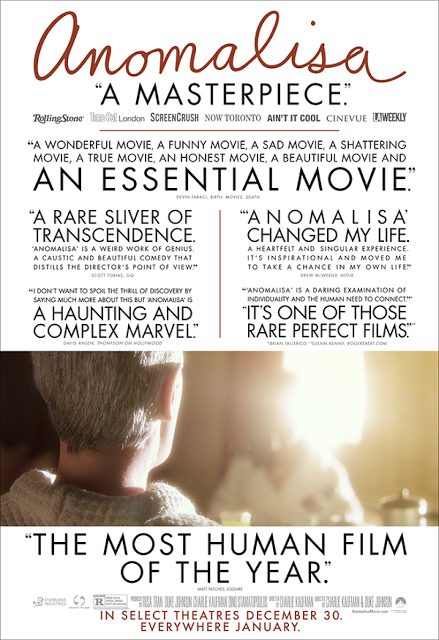 Charlie Kaufman is known for his portraits of depressed people going through surreal adventures. Anomolisa is no different, but it’s also so very, very different. This time, he focuses his eye on Michael Stone (voiced by David Thewlis), a man going through a special version of a mid-life crisis. He’s married and has a young son, but he’s starting to think that he may not love them anymore. In fact, he’s beginning to see everyone with the same face and the same voice (Tom Noonan). While on a business trip, he meets a young lady who is like no one else he’s ever known. Her name is Lisa (Jennifer Jason Leigh) and she’s an anomaly.

This stop motion film pinpoints how it feels to be in a relationship with severe depression. It’s beautifully animated and voice-acted and, like all Kaufman films, it’s not a happy film, but it’s really funny. Definitely one of my favorite films of the year. 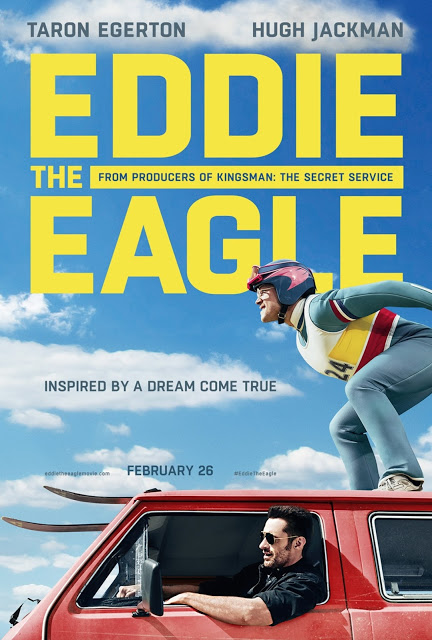 Anybody remember the 1988 Winter Olympics? I mean, for something besides the Jamaican bobsled team? Well, there was another unlikely hero that year. Eddie Edwards (Taron Egerton) was the British ski-jump team. He was actually the first British ski-jumper in many years. He wasn’t good, by any means, but he became a world-wide phenomenon.

There’s a lot of “been there, done that” in this movie, but it’s so well written and so well acted that none of that matters. Taron is perfect as the rather anti-social young man who defied everything to do what he loved. And, of course, Hugh Jackman is great as a pretty stereotypical drunk coach who just doesn’t want to be a coach

What really hit me about this movie was the tone. This is an 80s ski movie. All that’s missing is the “I gotta get laid” subplot. The music, the cinematography, some of the dialogue…that scene of Hugh skiing. It’s all hilarious, but it doesn’t distract from the heartfelt story that is the basis of the whole thing. It’s got the potential to be the Cool Runnings of this year. 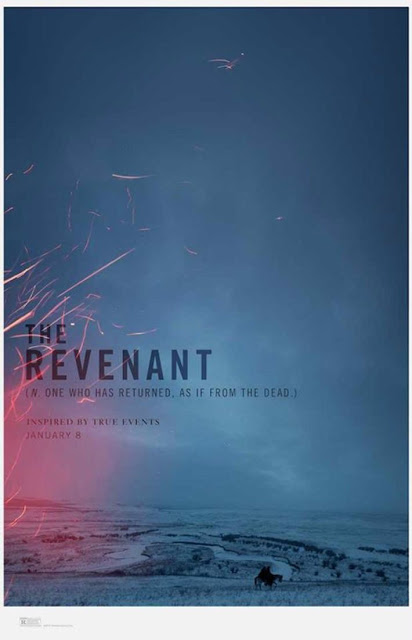 Living on the frontier in the 1820s isn’t easy. Hugh Glass (Leonardo DiCaprio) and John Fitzgerald (Tom Hardy) are part of a crew of trappers who have to battle Indians and the elements on a daily basis. When Glass is mauled by a bear (in one of the most intense animal attack scenes I’ve ever seen), he’s left for dead by Fitzgerald and young Jim Bridger (Will Poulter). Somehow, though, he doesn’t die…and begins a trek to get his revenge.

Filmed in the actual elements you see on screen (not a single CGI snowflake was used), this is one of the most brutal non-horror films I’ve seen in a long time. Just the bear attack scene alone is worthy of any gore film, but even without the action and brutality, the story of revenge and greed is enough to make any filmgoer squirm for some form of let up. All three of the leads deserve all of the accolades they’ll get. And don’t you worry. They’ll get them.

Now, let’s take a look at the two best vintage films we saw. 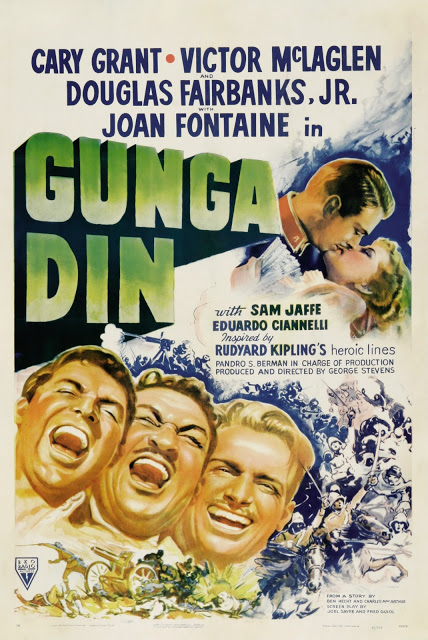 That’s a lot of uncredited writers, but they all deserve credit alongside Sayre, Guiol, Hecht and MacArthur for writing one of the greatest action comedies of all time.

Cutter, MacChesney and Ballentine (Cary Grant, Victor Mclaren and Douglas Fairbanks, Jr) are the ne’er do wells of the British Army during their occupation of India in the 1800s. The Brits get wind of an uprising of the Thugee cult and the boys end up taking on the entire Thugee army nearly single handedly…with the help of their trusted guide, Gunga Din (Sam Jaffe). Din is a loyal man who sincerely wants to help his British friends.

Sometimes, it’s hard to watch an old film like this that has such a pro-Colonialism bent. I mean, that is what it’s about, really. Those savage Indians can’t rule a country without the British telling them what to do.

BUT! Barring that, the movie is amazing and a LOT of fun. See it and see why George Lucas based the rhythms of Star Wars on it, and why he named an entire race after its title character. 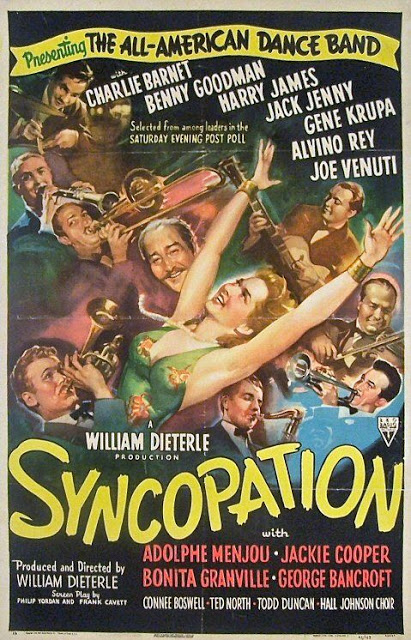 If you love jazz…wait. No. If you love music, find a way to see Syncopation. The story starts in New Orleans, where a little girl named Kit is enthralled with the music that her nanny’s son loves. She’s a bit of a prodigy on the piano and loves to play the jazz that she loves. He’s a bit of a prodigy on the trumpet and starts playing at a bar when he’s FAR too young. When Kit’s dad is forced to move to Chicago, she’s upset, but she takes the music with her.

Kit grows up (Bonita Granville) and is still playing her favorite music. She meets Johnny (Jackie Cooper), a trumpet player who is destined for big things. But, right now, he’s a street kid with a talent.

I loved the hell out of this movie. While it is very “white people make the world go ‘round”, it never talks down to the black characters. For a film made in 1942, they have pretty important roles.

BUT! The movie is a helluva lot of fun and the music is amazing. Then, at the end, there’s a ton of cameos by real-life big band and jazz musicians. Seek this movie out. And, while you’re at it, seek out some other Valentine Davis flicks like, oh, I dunno…Miracle On 34th Street. Or The Glenn Miller Story. Or The Benny Goodman Story, which she also directed. Or The Bridges At Toko-Ri. Nice to see a female screenwriter in the 40s and 50s.

In this article:Movie Marathon, Movie/DVD, Movies/DVD, Written by Mark Wensel