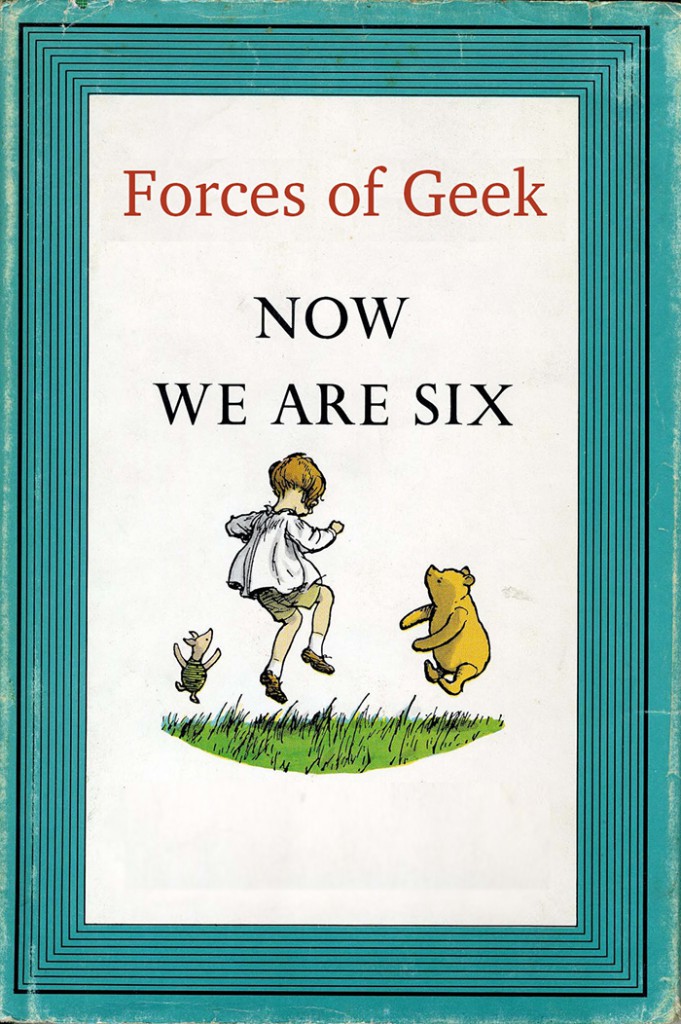 I totally forgot until I ran into an old friend, who asked me when the site launched.

So, what does it mean?  The site started as an offshoot of my old site, Forces of Good.  After my father became ill with Alzheimer’s, I took a break and then decided to relaunch with something fresh and new, Forces of Geek.

Although it seemed fresh, in the coming months we were caught in the wave of Geek Culture transforming into mainstream culture and the word “geek”, becoming a marketing term.

I’ve made plenty of mistakes and have had a number of victories. This has been a tremendous learning opportunity. The site has been an anchor as I dealt with personal issues like my father’s death and a cancer diagnosis of both my mother and sister weeks apart.  Sometimes the site suffered, but I never stopped working.

I’ve cultivated a philosophy that costs us traffic, but let’s me maintain my integrity; Forces of Geek is not about bashing or click baiting.  We’ve done it when we were starting out, and it’s not worth it.  I’m not here to trick you for traffic; I want to entertain you, inform you and brighten your day for at least a few minutes.

And we’re still here.  Trudging away. And unlike many of our competitors, we cover (or at least try to cover) a wider gamut than just comics, or film, or television or pop culture, which means we work hard at maintaining many relationships, not just studios, or publishers or publicists.

I read an eye-opening article last week, “Dissolved But Not Forgotten: Why Did So Many Good Pop Culture Sites Die in 2015?” which featured a tweet from Nicole Cliffe, co-founder of the site The Toast, in response to Grantland shutting down:

You honestly can’t start an indie site without VC money or a rich husband or a check from a Real Company, and that’s #realtalk

I’ll be the first to confess, we’re no Grantland. But, we also have no budget.  I freelance to get by, but the site doesn’t generate much of an income.  My writers don’t get paid (I wish I could; and inevitably when I reach out looking for contributors, when the first question I get asked is about money, I know it’s not a great fit).  Also, everyone seems to bring up Harlan Ellison’s “Pay The Writer” diatribe; but most people a. aren’t Harlan Ellison and b. aren’t writing for a giant corporation.  I’m a guy sitting in Starbucks.

So what can I say about moving forward, besides hoping a Real Company or VC wants to invest so we can get better?

We’re still here.  I’m committed to the site becoming stronger and better.  I’m looking for the best contributors that are looking for a home.  We’re transferring to WordPress in the future and will focus on bringing the best work out of everyone.  And hoping to attract and maintain a readership that finds what we have to say worthwhile.

This year will hopefully represent our biggest evolution and I can’t wait for you to be a part of it.

On that note, I feel like I need to thank many people for sticking with me, gambling on me, and at least taking a chance.  Some relationships suffered as the result of my own immaturity and management skills, but every one of the people below have been a part of making Forces of Geek a reality.  So, thank you and if I owe it to you, I’m sorry.

Wishing you all a happy and healthy 2016.

If I forgot you, I don’t love you any less.

“She may not look like much, but she’s got it where it counts, kid” Here we are, five years in.  I’ve been going through...