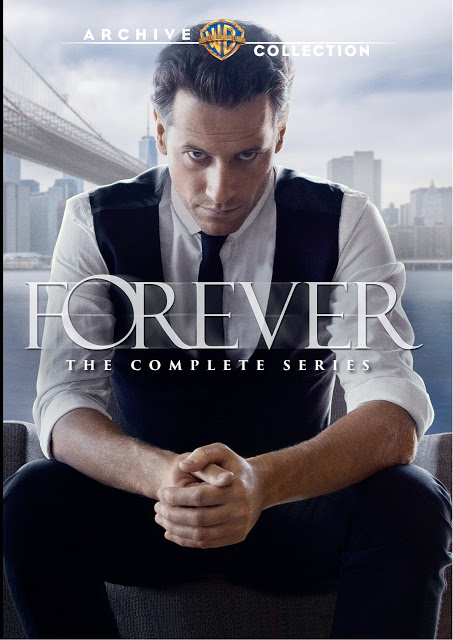 Once again, Warner Archive Collection rewards fan loyalty with the release of a much-beloved series – Forever: The Complete Series comes to DVD on Tuesday, January 19, 2016 via WBshop.com and popular online retailers.

Fresh off its single-season run on ABC in 2014-2015, Forever: The Complete Series includes all 22 episodes as well as additional never-before-seen deleted scenes from many of the episodes on a 5-disc DVD set. Creator and Executive Producer Matthew Miller (Chuck, Human Target, The 100) is thrilled the series will live on through its DVD release.

“We’re so proud of this series and the way it resonated with fans,” Miller says. “I’m excited for the fans that we’re not only able to release all 22 episodes on DVD, but include previously unseen footage. It’s another chance to breathe new life into the show for both devoted fans and new viewers.”

The series’ premise struck an instant chord with fans: What would you do if you had all the time in the world? The otherworldly drama – from Miller and fellow executive producers Dan Lin (Sherlock Holmes) and Jennifer Gwartz (Veronica Mars) – follows Dr. Henry Morgan (Ioan Gruffudd), a star New York City medical examiner, on his journey to answer that looming question. Henry has a vested interest in studying the dead: He is immortal, and only his best friend and confidant, Abe (Judd Hirsch), full of life at age 75, knows Henry’s secret. Henry hasn’t aged at all since the clock stopped 200 years ago, but he’s managed to be discreet without anyone finding out his affliction. That task becomes increasingly difficult when he meets NYPD detective Jo Martinez (Alana De La Garza), who is fascinated by Henry after learning he was the sole survivor of a horrific train crash — and his knowledge proves extremely helpful to her in solving crimes.

“This series is about a character who is immortal, and to that point the show never ends – it never dies,” Miller says. “Given the incredible fan support we’ve received, I feel like that’s true. The fans have not stopped for a minute. They host live Twitter events and have created fan fiction, online graphic novels, you name it. Social media and the release of the full-series DVD continue to make this show immortal.”

Warner Archive Collection (WAC) and Warner Archive Instant (WAI) continue to serve as hosts to some of the most treasured films, television series and animated entertainment in history, particularly in the fanboy realm. WAC/WAI runs the gamut from live-action classics like Ladyhawke and Wolfen to beloved TV faire such as Superboy, Wonder Woman (1974) and Shazam! to animated greats like Twice Upon A Time, Atom Ant: The Complete Series, Justice League Unlmited and Young Justice. WAC offerings can be found via wbshop.com and many of your favorite online retailers, and WAI is located at https://instant.warnerarchive.com. Get a free one-month trial now!