Welcome to my belated review of Star Wars: The Force Awakens. As much as I wanted to write up a review as soon as the end credits rolled, I decided to wait. I wanted to avoid being “Phantom Menaced” and watch the film a few more times while the nostalgia subsided.

Six trips to the theater, and a much lighter wallet, gave me some clarity on the matter.

While this is not a perfect movie, the pros heavily outweigh the cons, and its execution in giving audiences that Star Wars magic is flawless.

Plenty of spoilers after the jump.

Perhaps the film’s biggest accomplishment is the introduction of the new characters: Rey, Finn, Poe Dameron, and Kylo Ren. Han Solo, Princess Leia, and Luke Skywalker are names that transcend pop culture and therefore need no introduction. Casting and character development was the key ingredient in making this a reality for the newcomers and they were delightful in every sense of the word. 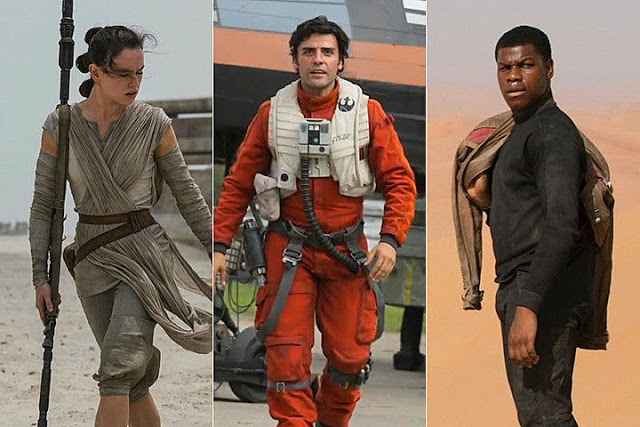 Daisy Ridley, as the orphaned desert scavenger Rey, was powerful and magnetic. Rey truly rose to be the occasion and became the new hero of the saga. Adam Driver’s role as the crimson blade wielding Kylo Ren, oozed unhinged villainy and displayed a complexity that was familiar and novel at the same time. Ridley and Driver are going to be household names coming off of these performances.

John Boyega portrayed disillusioned Stormtrooper, Finn. He brings humor to the film while transitioning from deserter to valiant combatant whose heroism shined in spite of his urge to find sanctuary.

Oscar Issac’s Poe Dameron, a hot-shot Resistance pilot, exuded the spirit of a freedom fighter. He didn’t have a lot of screen time, but his swagger demanded that we get to spend more time with him.

Harry Potter alum Domhnall Gleeson was effective and commanding as the Tarkin-esque lead of the First Order, General Hux. Lupita Nyungo’s performance as the motion cap character Maz Kanata conveyed a gravitas of someone who has been there, done that, and is as wise as her many years in the galaxy suggests.

BB-8 is beyond adorable and steals every scene he is in. The actors did an amazing job of making the soccer ball shaped droid feel like a real living character. Speaking of chemistry, it was in abundance on the screen, especially between Rey and Finn, which made it impossible not to like them.

Poe and Finn’s instant friendship was well realized and the back and forth between Kylo Ren and General Hux created tension with every word they uttered.

Let’s talk about the original cast. 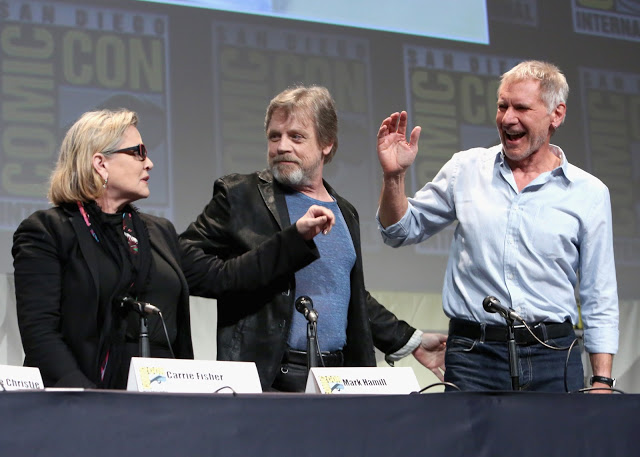 Carrie Fisher’s Leia Organa has traded in the title of Princess for that of General. She did a serviceable job enhancing the moments that were hers despite not being on screen that often.

Mark Hamill as the iconic Luke Skywalker only appears in the last five minutes of the film. I absolutely hated this at first but after a few more viewings, I’ve come to appreciate the enormity of the moment.

It’s always bothered me that Chewbacca never got a medal at the end of A New Hope, so I’m not going to forget about him here. Peter Mayhew brings Chewie to life once again as the furry and loyal companion that you don’t want to cross. Age has changed him a little bit as he had no qualms about calling Han out on his tall tales.

Harrison Ford returning to the role that made him famous, Han Solo, was an event unto itself. He was perfect in every way and captured the essence of an aged smuggler who has gone through some stuff while gracefully passing the baton to a new generation of heroes.

While there are a lot of other things I liked about the movie, there are some things that really irked me.

The absence of 20th Century Fox fanfare was a non-issue and kudos to Lucasfilm for not trying to replicate it or creating an entirely new theme its place. Doing so would have put a spotlight on the fact that it’s no longer there.

The opening crawl was clear, concise, engaging, and opened with four words that immediately captures your attention. “Luke Skywalker has vanished.”

The Force Awakens is the most beautifully shot Star Wars film, consisting of gorgeous cinematography and a clean visual flow. It soothed my soul to see practical effects again. Real sets, costumes, and locations provided that lived-in universe aesthetic of the original trilogy.

Its fast pace is also a benchmark of the series. There was a lot of ground to cover and the movie moved right along without any of the story being lost in translation.

The humor is strong with this one and it doesn’t detract from the film or take you out of the experience in the slightest. I promise there isn’t a person alive who didn’t bust out laughing when BB-8 put out a lighter as a thumbs up.

John Williams is a legend in every sense of the word and his talent is undeniable. However, his score in this seventh outing is the least memorable of the series. The absence of a standout melody such as The Imperial March or Duel of the Fates is sorely missed.

A mixture of themes of new numbers, interwoven with existing Star Wars music, occupied the majority of the soundtrack. While none of the songs will hastily urge fans to purchase the album, the score does serve the film well in various scenes to its desired result. 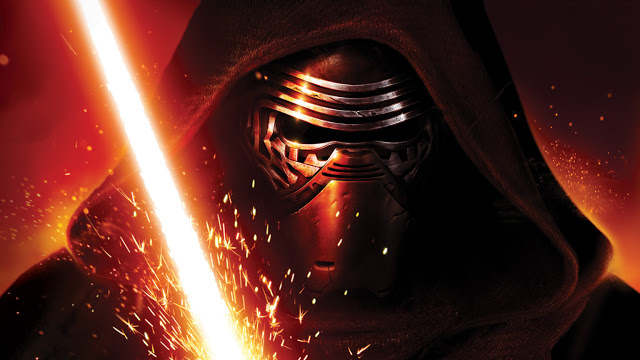 During the moment when Kylo Ren tried to use the Force to grab Anakin/Luke’s lightsaber, Rey is able to grab it instead and this resonates to such a degree not only because no one saw it coming, but because of how the Burning Homestead theme conveys the enormity of the moment.

Ironically, this is the same theme that played during A New Hope when Luke raced home, only to see the burning skeletal remains of Uncle Owen and Aunt Beru. It’s amazing that a piece of music can evoke utter sadness in one context, and epic triumph in another.

The death of Han Solo at the hands of his son, Kylo Ren, is a moment that will live in infamy. While it was telegraphed to the nth degree, it still works because instead of going out in a blaze of glory, he died as a father trying to save his son.​

The system destroying armament known as Starkiller Base was a missed opportunity that perhaps should have been left on the cutting room floor. We’ve been here before with the Death Star, but that’s not the real problem here. An entire planet that has been converted into a super weapon should have had more depth to its creation and capability.

In A New Hope, the deadly space station, and its ability, was established early on. Leia provided the emotional hook when she begged Tarkin to spare Alderaan, right before he nonchalantly destroyed it.

Starkiller just appeared out of the blue and its targets were only identified, at first, as the New Republic. We found out later that it was the Hosninan system that was wiped out. There was not enough information to make anyone care about this tragic occurrence.

I love that J.J. Abrams used the Ralph McQuarrie inspired X-Wing fighters, and the dual-piloted TIE fighters were a nice touch. However, where were the Y-Wings or the TIE Interceptors? 30 years later and no new ships was disappointing.

George Lucas gets a lot of slack from fans, but one thing that is undeniable is his ability to build worlds and incorporate new things. New star fighters were introduced in each of the previous films along with new worlds where their name and identity was firmly established.

Sure, I know that the lush green world where Maz Kanata resides is called Takodanda, but I had to read a book to find that out. It’s not the worst thing in the world, but that information should have been provided in the film.

Captain Phasma………..Captain Phasma did absolutely jack shit in the movie. The strong marketing push for the character was met with an onslaught of merchandise in every conceivable avenue. The thing is, Star Wars has a history of promoting characters who look cool but barely serve the story. 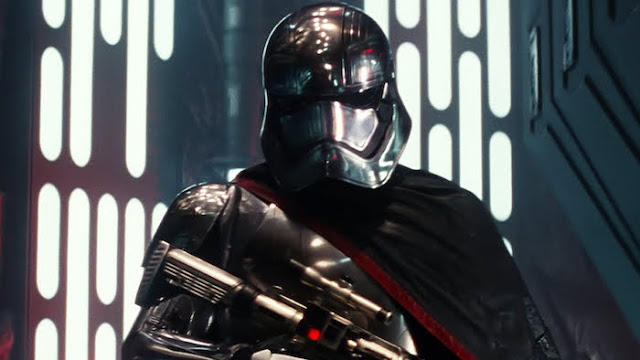 A chrome storm trooper, who is a colossus, prompted our imagination to the nth degree. The possibility that she would be of no consequence in the film was the last thing anyone expected. I complete forgot about Phasma until Chewie tackled her in the hallway. Hopefully Gwendoline Christie will get a chance to shine in Episode VIII.

Director J.J. Abrams had what is perhaps the most enviable and unenviable task in cinematic history.

If Star Wars: The Force Awakens failed to connect with audiences, he would forever live in prequel-level shame while ruining the mouse’s multi-billion-dollar investment. Instead, he brought the franchise back to its roots by using its familiar beats to capture the wonder and charm of a galaxy far, far away.

There is a very big sense of “we’ve been here before.” Originality and conceptual prowess can be debated until the cows come home, but this film needed to draw inspiration from its cherished predecessors in order to engage a new generation of fans while reminding the old school audience why they fell in love with this franchise.

Blockbuster tent pole movies today are all about the trilogy. The amount of unanswered questions, prior to and after The Force Awakens, makes Episode VIII all the more desirable. The most commonly pondered question of the holiday season wasn’t what is one getting for Christmas. It was whether or not Rey is Luke Skywalker’s daughter? 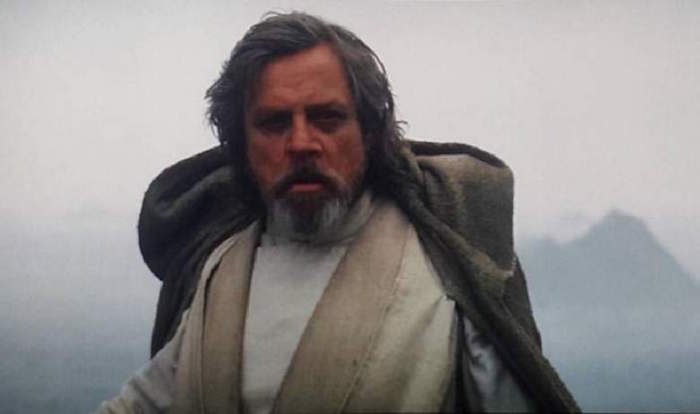 Familiar beats and imperfections not withstanding, Star Wars: The Force Awakens honored the original trilogy while providing something fresh. It was the perfect balance that allowed us to develop a relationship with some great new characters before reintroducing the heroes of our childhood.

Star Wars is back, and the possibilities are endless as to where the saga will go next.