A few years ago, in the wake of Trayvon Martin’s death and the rise of
the Black Lives Matter movement, my nerd-pop culture mind immediately linked to
a hulking, mistifying figure and his terroristic-revolutionary message of
tearing out society by the roots.
Yeah, I thought of Bane in The Dark Knight Rises. Or, to be exact, I
thought of a sentence he says as one of his faithful stays behind on a hijacked
plane about to plummet to the earth.
“The fire rises,” Bane says in that indecipherably accented voice Tom
Hardy inexplicably chose.
Since then, as I continued to read and comment and post about
racialized police violence, I often prefaced any of my social media posts
containing a story about BLM or police reform with a variation of the phrase,
“The fire rises.”
I thought about the fires burning in Ferguson and Baltimore, calling
back to Los Angeles and Detroit and Philadelphia and elsewhere. There’s the fire of ever-feared black rage, the well from
which white society often attributes a stereotype of superhuman brute strength
that must be controlled by paternalist white overseers.
And now, in the past couple of weeks, I can add new imagery to the
rising fire: Beyoncé’s sinking patrol car from the video for call-to-arms
“Formation,” and Kendrick Lamar’s gigantic actual bonfire blazing behind him at
the Grammy Awards last Sunday as he wailed on his informal BLM anthem
“Alright.” 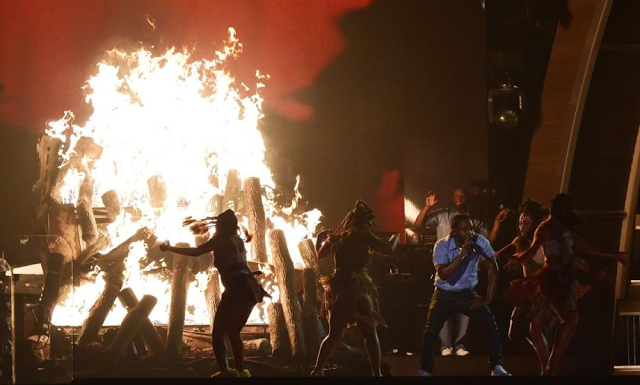 Kendrick Lamar’s performance at the Grammys, the only thing that could
follow the Hamilton cast, reminded me of my dream for an Afro-American
historical fable like Danny Boyle’s opening ceremony for the London Olympics. The
pageantry and fiery spectacle was like watching a modern-day hip-hop musical, a
bookend to Lin-Manuel Miranda’s take on the Founding Father that disrupts
historical narrative by sliding people of color, and their music, into pride of
place.

And here was Kendrick, essentially doing the same by crafting the most
audaciously fiery and critical hip-hop performance at an event that has been disrespectful
to hip-hop (no award categories until 1989) and R&B (none until 1995).

Even Macklemore apologized to Kendrick about his inferior album winning, as he
continues to pick at the white privilege that anoints him as “safe” in a genre
largely defined by black struggle. 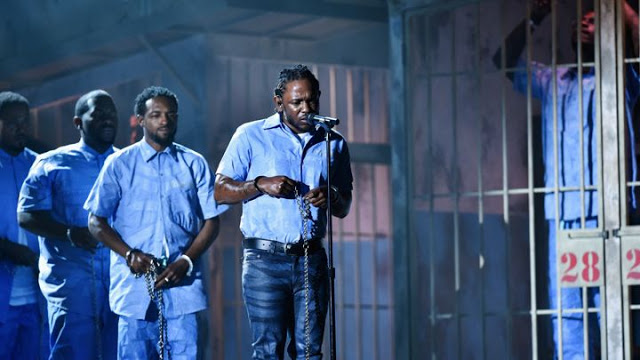 On the network that airs the conservative cop fantasy Blue Bloods,
Kendrick performed a Black Lives Matter anthem. (The line “And we hate po-po / Wanna kill us dead in the streets for sure” was conspicuously absent, though.) He came out in prison chains
and blues and forcefully, aggressively rapped on the rage of black strife (“You
hate me, don’t you? You hate my people, your plan is to terminate my culture”)
amid guitar thrash and saxophone.
Kendrick staggered into an African village with dancers in Fela
Kuti-like imagery, yelling, “I’m African American, I’m African  / I’m black as the moon, heritage of a small
village.” All as that gigantic bonfire raged behind him.
And then, lest we forget whose talent we’re witnessing, everything
falls away to a single spotlight as Kendrick spat contempt at modern slavery
and the killing of Trayvon Martin: “On February 26, I lost my life, too.” The
strobes flashed as the cameras cut, an assault on the senses resembling a
psychological break or traumatic episode.
In the years since George Zimmerman’s acquittal over Martin’s death, which
in part catalyzed the Black Lives Matter movement, I’ve written and spoken at
length about the mental state living under suffering, deprivation,
dispossession and death under systemic racism. It’s a tortuous grief that just
sits in the psyche, like a box of death, at all times. Luck, privilege and
placement on the socioeconomic ladder may make the box smaller, the lid more
closed, but the box remains.
There are many ways to deal with the box. To quiet the mind. Like
Kendrick, you can rage and confront the pain and anger head on.
And sometimes, you can lean into it all.

All the denigration, all the devalued
differences, all the disreputable pieces by which your entire people are
painted. You can confront internalized stereotypes and white gaze-fueled ideas
of respectability, and say, “I’m all that and more, and amazing because of it.
Fuck your expectations.”

In other words, you can be Beyoncé in her latest, “Formation.”

Having been in enough situations in my 35 years of life by which I was
expected to conform to a racialized idea of The Way To Behave to please white
folks, there’s a disquieting aspect to white social acceptance that too often
falls along supremacist ideas.  That, to
get along, you need to not be seen as black, to be “one of the good ones” and “not
like those other black people.” To strip away your difference and play by their
rules.
Beyoncé, in her most recent incarnation of 2013’s self-titled album, turned
inward to create some personal, political music speaking to her life and
identities as a woman. From beauty/body issues (“Pretty Hurts”) to motherhood (“Blue”)
to sex (“Partition”), jealousy (“Mine”) and the empowerment of self-regard (“Flawless”), Beyoncé went to a whole new level in a career of making music for women.
And with “Formation,” Beyoncé goes even further by leaning into every
bit of her black heritage, all the parts considered unsavory and uncouth. In just
one line alone, she snatches up both “Negro” – that old-school (or outdated)
word for black Americans – and “bama,” the near-slur used to negatively
describe country black folk.

She namechecks baby hairs and Afros for her daughter Blue Ivy, hitting back at
online talk among black people about “fixing” her hair. She praises “my Negro
nose with Jackson Five nostrils” and that she’ll never not be country despite
her riches. “I got hot sauce in my bag, swag.”
Through ironic reversal, Beyoncé gleefully claps back at colorism, at gender
roles regarding sexual satisfaction and reciprocal gifts, at items of ownership
from expensive sneakers to record industry/cultural dominance. If Beyoncé’s
onstage persona is that of power, she outlines several kinds of power in “Formation.”
In the video for the song, Beyoncé inhabits many kinds of black women
in the backdrop of her Southern, Louisiana heritage. She’s the girl in the wig
shop, the creole belle in her parlor, the hood chick in the El Camino sipping
on Cuervo, the round-the-way girl with her squad of girls dancing on home
movies.
Beyoncé dances and sings through imagery of Katrina and police
brutality, linking Black Lives Matter to the 21st century’s first “they don’t
care about us” moment. In this world of “I slay” black excellence, a black boy
can dance, and the riot-gear officers put their hands up and don’t shoot.
In this world of Black Girl Magic, Beyonce calls her black female team of
dancers to get in formation as they twirl on them haters. Even if their Busby
Berkeley-Esther Williams production is in a derelict, empty pool.

Beyoncé calls for black women to get in formation, and Kendrick bring
black men out of the chain gang formation.
They’ll do so anywhere they please,
whether white people like it or not, understand it or not. Beyoncé will do it
at the Super Bowl halftime show with Black Panther Party backup dancers twerking
while she rocks fishnets and Michael Jackson bandoliers. That gives me hope, to know that I as a black person can continue to
write for me, to tell my truth honestly and knowledgeably.

That to be pro-black
doesn’t mean being anti-white, to assert difference isn’t the same as being
divisive, to disrupt an inequitable situation isn’t automatically a
nullification, to assert one’s whole humanity while withstanding the fragility
of white supremacy.