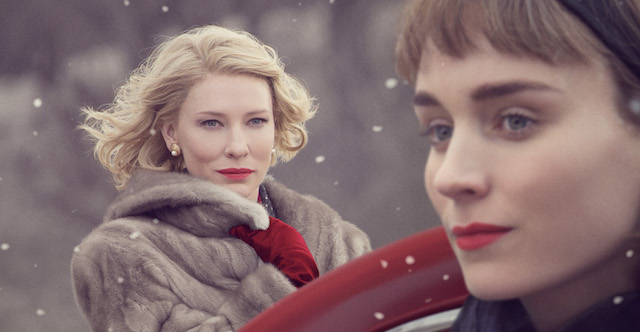 Anchor Bay Entertainment and The Weinstein Company are proud to announce the home entertainment release of CAROL—one of the most critically acclaimed films of 2015, from director Todd Haynes and starring Academy Award winner Cate Blanchett and Academy Award nominee Rooney Mara.

Adapted from Patricia Highsmith’s seminal novel The Price of Salt, CAROL follows two women from very different backgrounds who find themselves in an unexpected love affair in 1950s New York. As conventional norms of the time challenge their undeniable attraction, an honest story emerges to reveal the resilience of the heart in the face of change. A young woman in her 20s, Therese Belivet (Rooney Mara), is a clerk working in a Manhattan department store and dreaming of a more fulfilling life when she meets Carol (Cate Blanchett), an alluring woman trapped in a loveless, convenient marriage. As an immediate connection sparks between them, the innocence of their first encounter dims and their connection deepens. While Carol breaks free from the confines of marriage, her husband (Kyle Chandler) begins to question her competence as a mother as her involvement with Therese and close relationship with her best friend Abby (Sarah Paulson) come to light.

Living up to its groundbreaking source material, the film premiered to a standing ovation at the Cannes Film Festival—and won the festivals’ Queer Palm award. Since this auspicious debut, it has continued to collect both adoration and accolades. The Academy Awards honored the film with six nominations, including Actress in a Leading Role for Cate Blanchett and Actress in a Supporting Role for Rooney Mara. The film garnered five Golden Globe nominations—the most of any film this year—including Best Motion Picture, Drama, alongside nominations for both Cate Blanchett and Rooney Mara for Best Performance by an Actress in a Motion Picture, Drama. Blanchett and Mara also received Screen Actors Guild nominations for Outstanding Performance by a Female Actor in a Leading Role and Outstanding Performance by a Female Actor in a Supporting Role, respectively. Other awards and nominations include: nine BAFTA nominations; six Spirit Award nominations; four wins from the New York Film Critics Circle for Best Film, Best Director, Best Screenplay and Best Cinematography; nine Critics’ Choice nominations, and over 125 Top Ten lists.

A beautifully realized and impeccably acted piece of filmmaking, CAROL also features an array of stellar talent. The screenplay is written by Emmy -nominated writer Phyllis Nagy; and Todd Haynes reunites with his collaborators from FAR FROM HEAVEN, Academy Award winning costume designer Sandy Powell and cinematographer Ed Lachman. Nagy and Powell were both honored with Academy Award nominations for their work on CAROL. 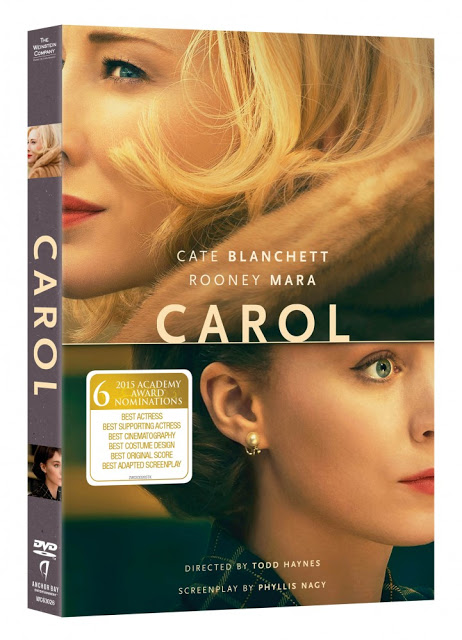 CAROL will be available for digital download on March 4, 2016 from Starz Digital before heading to Blu-ray and DVD from Anchor Bay Entertainment and On Demand March 15, 2016. The DVD will retail at $29.98 and Blu-ray $34.99.

Special features include a Behind the Scenes Gallery featuring cast and crew—as well as a Q&A with cast and filmmakers.

To learn more about the film, please visit www.anchorbayentertainment.com.