It’s a fact: the explosive Chuck Norris thrillers Invasion U.S.A. and Braddock: Missing in Action III are coming to Blu-ray!

Fans can pre-order their copies now by visiting ShoutFactory.com 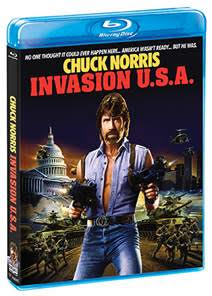 When America faces invasion for the first time in history, it’s up to one-man army Matt Hunter (action superstar Chuck Norris) to wage war upon the enemies of freedom. On suburban streets, in shopping malls, and even in churches, the firepower explodes in megaton fury… and death-defying stunts escalate into a heart-stopping climax when Hunter, America’s doomsday weapon, launches his final plan.

An army of terrorist mercenaries led by Soviet agent Rostov (Richard Lynch, Bad Dreams) catches America unprepared and makes it a war zone from sea to shining sea. Only one man can stem the rising tide of violence: retired agent and martial arts expert Matt Hunter. Leading the United States Army into guerilla warfare on its own turf, Hunter won’t stop until every last bazooka-wielding enemy is taken out. From the director of Missing In Action, Joseph Zito, comes one of Norris’ most action-packed films. 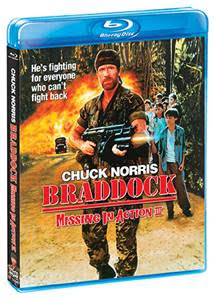 When Colonel James Braddock (Chuck Norris) is told that his wife and 12-year-old son are still alive in Communist Vietnam, he mounts a one-man assault to free them. Armed with the latest high-tech firepower, Braddock fights his way into the heart of the country, and ends up battling his way out with several dozen abused children in tow. Struggling to keep the kids protected while outmaneuvering the sadistic Vietnamese officer General Quoc, Braddock ignites the jungles in a blazing race for freedom.