There’s no doubt that the boldest and most personal fashion statement, anyone can make is in one’s selection of t-shirt.  Personally, I love them. It’s an opportunity to show the world what pop culture I care about, a wonderful flashback to the past and a fantastic way to initiate any nerd discussion.

For this installment of Cool Shirts, I took a look at some of the shirts from our friends at SuperHeroStuff.com which is not only one of the industry’s oldest superhero specialty shops, but also one of the best.

And if you’re interested in staying up to date, they have plenty of Deadpool, Batman v Superman and  Star Wars: The Force Awakens merchandise to satisfy any and all geek cravings.

These are a few of my recent favorites.

So, a farm boy leaves a desert planet to save a princess, befriend a pirate and his furry alien co-pilot and fall under the tutelage of an old wizard against an evil empire who have created a weapon the size of a planet.

The farm boy joins the princess’ rebel squadron and lands the near-impossible shot which destroys the almost indestructible planetoid weapon of destruction.

And is rewarded with a ceremony where he and the pirate get a medal and the applause of the entire rebellion.

He also gets a new jacket. #swag 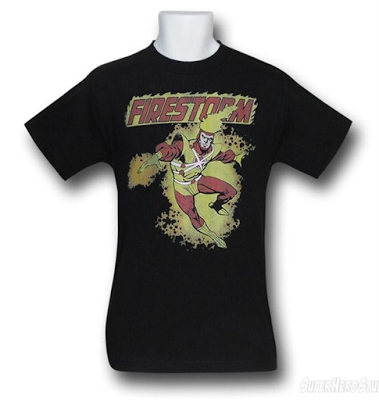 For me, part of the appeal of Firestorm is the pure ridiculousness of the sleeves on his costume.

His head is an open flame of nuclear energy and his his hands allow him to project pure energy.

And he has puffy sleeves.

Chances are he’d drag those through the hummus when reaching for a chip.  The fact that he’s one of the more powerful beings on the planet and chooses to don a billowy shirt is a question for the ages.

Not wearing this awesome shirt is an equal question that is likely going to haunt you for all of eternity.

I’m the best there is at what I do.

And what I do isn’t very nice.

When it comes to everyone’s favorite Canadian mutant, this image by Arthur Adams has become one the character’s most iconic.

New folks might think Hugh Jackman is Wolverine, but old school fans know that he’s not much more than a 5’3″ bad-ass with a berserker rage and a penchant for cheap beer and redheads, bub.

In the upcoming Batman v. Superman we’ll witness the first onscreen pairing of The Man of Steel with The Dark Knight.

As someone who didn’t love Man of Steel, and has been less than enthusiastic with Affleck’s duct tape-esque costume, there is no doubt how fantastic this logo is.

Plus, finally seeing Affleck kick ass as Batman (perhaps the best on-screen interpretation yet) has me giddy.

For more details and to check out their entire selection, visit SuperHeroStuff.com!