Dynamite Entertainment again partners with Humble Bundle for one of the most jam-packed collections of comics and prose yet! This latest offering features some of the biggest authors in the publisher’s catalog, giving readers approximately $250 in content for a fraction of the cover price for fans to pay what YOU want for each bundle, and introduce yourself to Dynamite’s library of literary titles!

“It’s always a lot of fun to work with our good friends over at Dynamite,” says Kelley Allen, Director of Books at Humble Bundle. “This promotion is chock-filled with mega star authors, artists and creators to the hilt!”

“Dynamite has been incredibly fortunate to work with some of the greatest names in fiction,” says Dynamite CEO/Publisher Nick Barrucci. “This year marks the fifth anniversary of New York Times Best-seller Charlaine Harris’ first-ever graphic novel adaptation of her series, Grave Sight, as well as the anniversary of Dean Koontz’s incredibly suspenseful graphic novel adaptation of Fear Nothing. We wanted to mark the occasion by gathering together the work of numerous phenomenal writers into one great bundle, titles like Shaft: A Complicated Man (the 2015 Glyph Award winner by writer David Walker) and Legends of Red Sonja (a celebration of so many sensational authors, spearheaded by the talented Gail Simone). This will give fiction fans a low cost way to check out Dynamite’s wide catalog of literary all-stars, and all in support of three great causes. This bundle is packed with something for fans of comics and prose!  And with this bundle, we are also supporting 3 GREAT charitable organizations that we feel help those in need – The Make-A-Wish Foundation, The Comic Book Legal Defense Fund and Doctor’s Without Borders.”

The “pay what you want” model offers readers the chance to unlock over 120 comics, and over 3,500 pages of content. This will give graphic lit fans access to:

As the bundle progresses, there will be a running average.  For those who pay more than the average price will also unlock these additional titles: 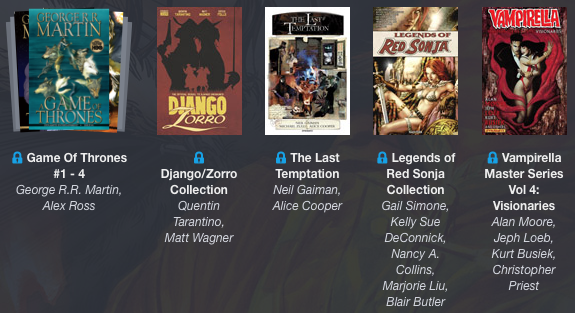 As an added value, Dynamite and Humble Bundle will make a mid-promotion announcement, adding additional titles to be unlocked for anyone who purchases above the average price at that time! All who purchase at this tier or higher will be granted access to these special additions, regardless of when they buy in!

Writer Gail Simone, reimagined the Red Sonja for Dynamite in 2013 after memorable work on such titles as Deadpool, The Simpsons, Birds of Prey, Secret Six, Wonder Woman, and Batgirl.  Her Red Sonja series ran for nineteen issues with the debut chapter receiving immediate critical acclaim and an impressive, immediate sell-out of its 35,000-unit first printing. On two occasions since, she has assembled teams of fiction’s top female writers — well-respected professionals from the prose, fantasy gaming, and comic book worlds — for collaborative projects at Dynamite, the aforementioned Legends of Red Sonja and the epic Swords of Sorrow event in the summer of 2015.  Simone, reflected on Legends of Red Sonja to promote this Bundle.

“So, we wanted to do something very special for the 40th anniversary of Red Sonja’s creation, and I had this idea, what if we did an anthology, like the classic sword and sorcery black and white magazines, but with the stories all connected by a theme? That seemed exciting, but because it was Sonja, I wanted also to do something that would have been nearly impossible 40 years ago…have all the writers be women. But would it work? Would there be enough great female writers who wanted to write about the She-Devil (and her infamous chain mail bikini)?

“I needn’t have worried. I made a list of brilliant writers whose work I loved, and within a day, everyone answered back with an enthusiastic HELL, YES. We got some of my favorite prose writers, like Nancy Collins and Mercedes Lackey, as well as Meljean Brooke and Tamora Pierce in their first-ever comics work. We got comics superstars like Kelly Sue DeConnick and Marjorie Liu. We got Devin Grayson, ace Batman writer, back in the medium she loves after years away. We got people from games and television, it was just a killer line-up, every one a samurai. It was as much fun to create as it was to read. That line-up may never happen again, it was just once-in-a-lifetime.

“And it was all for the love of a redhead with a sword. Thanks, Dynamite, for allowing us to run through the village, creating havoc on the populace. It was indeed, the best of times!”

Best-selling author Dean Koontz, with over 450 million books sold and fourteen number one hardcover bestsellers, reflected on Dynamite’s adaptation of Fear Nothing, while promoting this Bundle.

“Dynamite’s graphic novel adaptation of Fear Nothing knocks it out of the park. Sophisticated, engrossing, and fun. It pushed all my buttons — the right ones!”

Visit https://www.humblebundle.com/books/dynamite3_bookbundle today to start your collection of Dynamite comics, graphic novels, and prose! Upon purchase, you can choose where the money goes-between Dynamite and three charitable causes (Comic Book Legal Defense Fund, Doctors Without Borders, and the Make-A-Wish Foundation) via the PayPal Giving Fund.