With Blue Mountain State football star Thad Castle recently signing a multi-million dollar NFL contract, his teammates and college life seem like a distant memory. However, when a new school dean threatens to clean up the BMS image by auctioning off the infamous Goat House, Alex, Sammy and the boys must find a way to convince him to get involved. Despite his new fortune and fame, there is one small favor that Thad needs done before he saves the day: the biggest booze-and-sloot fest in BMS history. Welcome to Thadland!

Blue Mountain State: Welcome to Thadland reunites the cast and creators of the prematurely cancelled Spike television series for an all new feature film.  Launched with a successful Kickstarter campaign, BMS has returned and is now available on Digital HD.

Series creators Chris “Romanski” Romano and Eric Falconer took some time out of their busy schedule to chat the film, the genesis of the series and the future of Blue Mountain State.

FOG!: How did you guys start working together and what was the genesis of the series?

Eric Falconer: Romanski and I met at Emerson college. We both transferred into Emerson at the same time and ended up living together in the dorms with four other guys. We hit it off and eventually started doing live stand up and sketch shows together. After graduation, Romanski moved to LA and convinced me to move out after him. I was only planning on being there for 12 months, but that turned into 12 years and counting.

Romanski:  Blue Mountain State came about when we heard Spike TV, Lionsgate, and producer/director Brian Robbins were looking to do a college football comedy. Our pitch was basically Animal House set in division one college football. We pitched it thinking our version was so crazy we had no chance of it going anywhere, but we got a call right after the meeting saying Spike was buying it.

The series had a huge cult following when it aired on Spike, yet it was cancelled prematurely. How long after it’s cancellation did you decide to do a film?

Eric: We always wanted to do a film. We were actually negotiating to do a film as part of a fourth season when we were suddenly canceled. Then Lionsgate considered doing on, but decided not to. Ed Marinaro and Alan Ritchson managed to wrestle the rights for BMS away from Lionsgate and then we all decided to do a Kickstarter. The rest is history.

I know part of the process of the film was getting the rights from Spike. Do you now own BMS?

Romanski: No. Lionsgate gave us the rights to go off and do one movie. After this, the rights revert back to Lionsgate. If we’re fortunate enough to do more BMS, it will be with Lionsgate.

You raised almost $2 million via Kickstarter. Was there any additional funding?

Eric: Yes. The money you earn on Kickstarter doesn’t all go into your bank account. Kickstarter takes a 5% fee off the top. Then Amazon, who processes the payments, takes between 3-4%. Then we broke a record for dropped pledges (donations we couldn’t collect). Then we had to hire a fulfillment company to manufacture and ship all of the merchandise we had promised as rewards. So the money we had to actually shoot was not $2 million.

Romanski: We brought on a financier to fill the in gap and help make the movie. He turned out to be a scumbag, so we ended up selling the distribution rights back to Lionsgate and used that money to finish the movie. It’s weird how it came full circle. 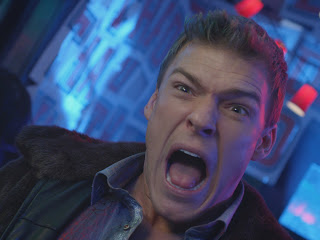 Alan Ritchson joined you both in writing the screenplay. What was that process like adding a third voice to the team and how did it come about?

Eric: The making of the series was a very collaborative effort between Romanski and I and the rest of the cast.

So it wasn’t too much of a stretch to have Alan join in on some of the writing once the three of us joined forces as producing partners on this movie.

Romanski: The process didn’t change much. Just another voice in the room adding to the craziness.

Were there any characters or actors that you weren’t able to bring back?

Eric: Yes. A lot. We would have loved to bring back some memorable characters like Gabrielle Dennis who played Denise, Annie Murphy who played Jill in the Marathon Monday episode, and others, but our cast was already so giant it was tough (and expensive) to bring everyone back.

Romanski: If this movie does well, which it seems to be doing, hopefully we’ll get to do more BMS and bring those character back in either another season of the series or more movies.

The future of BMS depends on the success of this release. If you had a choice would you rather continue BMS as a series of movies, or go back and do more seasons?

Eric: I think we want to do both. I want a fourth season so we can tell the story of Alex’s senior year. I’d also like to continue making movies that supplement the series.

The series had a certain amount of raunch. Did you feel like the show gave you just enough leeway or did you prefer the complete freedom of the movie?

Eric: I think restraint can be a very good thing with shows like BMS. It was fun having nobody to answer to with the movie. We took things to an extreme that’s for sure. But sometimes having people telling you “no” forces you to be creative in how you approach the comedy.

Romanski: I disagree. I like being able to do whatever the fuck we want. Like we did with Thadland.

Funniest college movie of all time?

Eric: Most people would say Animal House. It’s really great, but I think Real Genius is better. I love that movie.

Romanski: Revenge of the Nerds.

Romanski: Kendrick Lamar and my continuing frustration with Making a Murderer.

Eric: It’s weird, but I’ve been burning through season of the West Wing on Netflix. Never watched the show when it was on, but it’s great. And Mad Dogs on Amazon right now. Just started it, but looks promising. 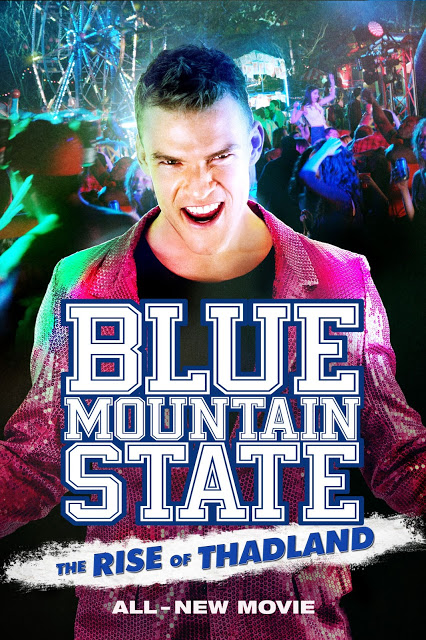 Blue Mountain State: The Rise of Thadland is now available on VHX and Digital HD