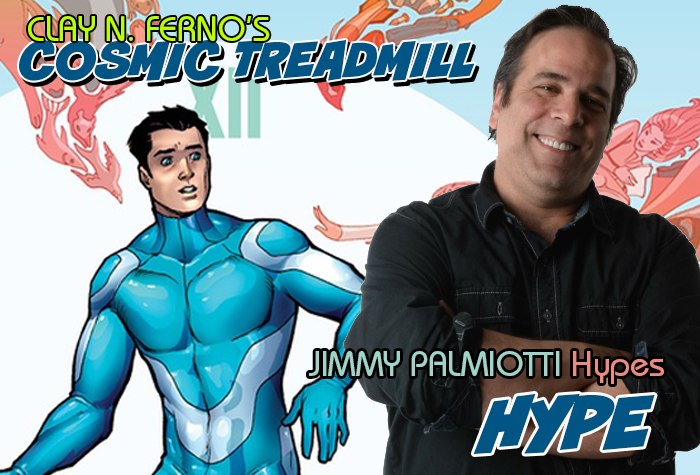 For the uninitiated, Jimmy currently writes Harley Quinn for DC Comics with his wife, Amanda Conner, as well as All-Star Western (and formerly Jonah Hex) with Justin, and started the Marvel Knights Imprint with Joe Quesada; as well as many television and movie credits to his name including Painkiller Jane.

When it comes to creator-owned comics, Jimmy gives us good reason for fans to support the books they love from creators they care about, so read on to learn about Hype, a new superhero that only limited time to get his mission accomplished—much like the target goal on his new Kickstarter!

If you are in the area, be sure to catch up with Jimmy at the Long Beach Comic Expo this weekend! LBCE is one of the most creator-friendly conventions in the country that celebrates comic books and pop culture and diversity.

FOG!:  Jimmy, thanks for joining us to talk about Hype. You and Justin Gray are at it again, I’m sure fans are as excited as we are! Who did you tap for the art team this round?

Jimmy Palmiotti: We are working with both Amanda Conner and Dave Johnson on the covers and the interior of the book is designed by Bill Tortolini, who is doing the lettering as well, and the story is edited by Joanne Starer, our go to editor.

As far as the actual art on the story, we looked at a lot of different artists for the book and decided that Javier Pina and Alessia Nocera were the perfect choices because of their storytelling skills and also because they both are at the top of their game right now.

Our hero, Noah Halle has superhuman abilities, but is only allotted an hour of awake time each day. Is he a tool for the government?

He is, but when put that way, it sounds all bad and its not. This Government also helps people in need and does a lot to stop big disasters from happening, so they created a person that would be built to handle such challenges.

The reflex these days is to attack government, but its also good to point out what works about a government run program as well from time to time.

The most obvious one is if he cannot finish his mission in time, and if he doesn’t, he runs out of juice and has to be retrieved from the people that look after him. As well, with the time constriction, we are looking at someone that is developing differently than a normal human being, so the program he is working with has to understand this and push his development in different areas faster.

How does Hype get involved with his Amanda Marr? What training does she have?

Amanda is a brilliant scientist, and psychologist that understands the inner workings of brain development and the importance of interaction with her newest project, the Hype program. She is also the perfect person because she is smart and patient and is willing to give all of herself to the program.

The Kickstarter is winding down, can you tell me if this 52 page story is a one-shot or is there more to be told in this world?

Well, it is a one shot for now with the hope that people would want to see more of the character in the future. What our main concern right now is hitting our goal…and we are still far from it and the days are winding down, so our main focus is on the one book today.

We are all fans of both your mainstream and independent work, and there seem to be an endless run of books twisting the superhero genre on its ear or deconstructing the classic ideas. What sets Hype apart from what we are seeing on the shelves today?

I think with all our work, it’s the character interaction that makes it stand apart. The idea that you will care for these characters right away and want to know more about them and follow them on their adventures, which is the most important thing about Hype. It’s the connection. There are a lot of books coming out, but some seem more set on delivering a style and less about an actual story.

As an established name in the industry, you keep returning to Kickstarter to successfully crowdfund work. Are these books that you have already pitched to publishers?

With Hype, we have pitched this idea to three publishers, all of whom have passed for one reason or another. Mostly because they looked at it and thought there was no money to be made, and I can respect that, but at the same time a one page pitch is totally different than delivering a finished book and I think once they see this, they will feel they might have made a mistake…I hope. 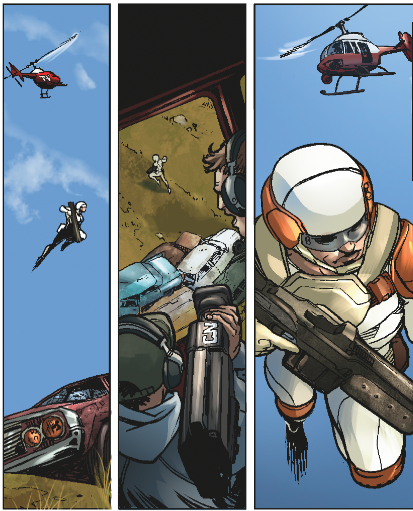 Where is the disconnect that’s preventing these books to be produced through traditional channels? Are the publishers or retailers the ones who are hesitant to support something new? Do you think that having fans commit financially upfront is the only way they can be produced?

Well, the third reason might be the one that is my one main reason and
it is that I enjoy doing the Kickstarters because I like the connection
to the audience that supports our books. If you go to Paperfilms.com
you can see a wall of titles that people have gotten behind with us and
supported mainly because they enjoyed the work, and this is key to my
success. I am not looking to distance myself from the reader on any
level.

In a perfect world I would be telling these stories to everyone while we sat around a fire. I know the retailers are dealing with a glut of books right now and the publishers have another agenda, mainly licensing or selling the properties to film and TV, but for me, I am creating comic books, graphic stories that have to work in this medium first and foremost.

At the end of the day, no matter what happens to a property outside of its original form, people always come back to the comic, so it better be good.

Jimmy will be attending the Long Beach Comic Expo this weekend.  Click HERE for details.