One of the more amazing experiences that Lily and I made had our recent visit to Rome was a visit to Cinecitta, the famed Italian movie studio that was built by Mussolini in the late 1930s to save the fading film industry which not only produced propaganda films during the early years of fascism, but also created many popular narrative films, including those of directors such as Raffaello Matarazzo. Unfortunately, the studios were bombed during the final months of World War Two, the damaged buildings and sets became home to thousand of displaced refugees for a few years before being revived as a functioning production studio during the Neo-Realist period.

This Neo-Realist era would subsequently turn into the golden age of Cinecitta with the rise of Italian directors, Frederico Fellini, and Bernardo Bertolucci. as well as the studios becoming the place to shoot sword and sandal films by not only Italian auteurs but also famed American directors like Joseph L. Mankiewicz who shot his epic, Cleopatra which starred Elizabeth Taylor there in 1963.

As the 1960s rolled on, the studios began to crank out numerous Italian or spaghetti westerns. a fact that shouldn’t be lost on anyone who reads my site as I have reviewed several rare titles within the genre over the last few years.

What I did not know until visiting Cinecitta is that many of these films are not revered in Italy as they have been deemed too colonial in their message by a predominance of Italian film goers. That message of the antiquated perception of these titles was made quite clear during our tour of Cinecitta, though the museum still chose to honor this genre with an impressive, albeit smallish portion of their museum. Long gone were the western town sets that littered the lots of the studio, they were demolished in the 1980s to make way for the construction of sets depicting ancient Rome which were needed for a new generation of sword and sandal films like HBO’s 2004 series Rome. This fact being somewhat bizarre to me as the spaghetti western was originally the genre that took sword and sandal out of Italian mainstream popularity.

Lily and I were still thrilled to see their spaghetti western exhibit which had a film tribute to the genre, Clint Eastwood’s actual poncho from Sergio Leone’s classic, For A Few Dollars More, and a few rare film posters strew around the western saloon edifice for effect. One such poster was that of a rarely seen 1975 spaghetti that surprisingly was directed by horror master Lucio Fulci (The Beyond, Zombie) that caught Lily’s eye, Four Of The Apocalypse. I was also intrigued and immediately went online to pick up a copy through the folks at Blue Underground who had it waiting for us when we returned from Italy.

Released in 1975 when the western was fading out of vogue for the less costly to produce Eurocrime film, Four Of The Apocalypse was banned in several countries on its initial release because of, you guessed it, the graphic violence and sadistic cruelty that mark many a subsequent Fulci film and although the violence is fairly disturbing at points that should not dissuade you from seeing a very personal and at times, emotionally complex late spaghetti western.

No stranger to the western genre after two successful adaptations of Jack London’s White Fang in 1973 and 1974, Fulci drew from two well-known 19th century short stories from famed western writer Bret Harte, The Outcasts Of Poker Flats and in the last third of the film, Fulci uses Harte’s heartwarming tale, The Luck Of Roaring Camp. Our film begins with gambler Stubby Preston (an extremely well-coiffed Fabio Testi) as he arrives via coach to the rollicking gold town of Salt Flats with a plan to bust the town’s casino to only be met by the town’s sheriff, who immediately locks up Stubby in the town pokey with a pregnant hooker named Bunny (Lynne Frederick), the town drunk, Clem (Michael J. Pollard, the wheel man from Bonnie and Clyde) and Bud (Harry Baird), an African American man who does not have all of his marbles. The four quickly bond in the cell and are soon shuffled out of town by the apathetic sheriff when vigilantes decide to do on a murderous coup. 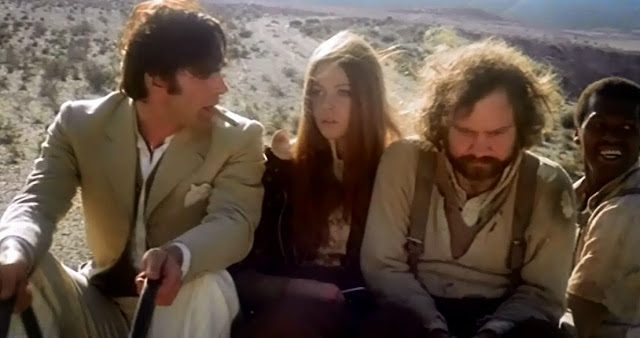 The quartet are cast out upon a wagon but are not at odds with one another.

Sure, there is sometime acrimonious sexual tension between Stubby and Bunny, and Clem is savagely jonesing for a drink but all in all our protagonists have accepted their roles as outcasts and are supportive of one another as they travel onward. Our group soon stumbles upon a well-meaning wagon train of religious crusaders who distill of bit of homespun wisdom on our misfit travelers but after a few words and a meal, they all go their separate ways. Juxtaposing the harmony is the sudden jarring inclusion of Chaco (Thomas Milian) a vile Charlie Mansonesque killer, complete with tattoos fashioned under his eyes, who seems to unable to move an inch without killing something in his way and whether that target is a wild animal or the lawmen that are following Chaco, they are doomed to die and in the case of one sheriff, he is brutally tortured and mutilated before dying.

Following the carnage, there is a scene that seems to be pulled from Jodorowsky’s psychedelic western El Topo, when Chaco feeds our four misfits some peyote but a trippy voyage does not follow as indeed this Chaco is bad news for everyone he touches and this moment of letting their guard down will cost our broken heroes dearly.

Even though the four escape death through the hands of Chaco, they are more damaged than ever before and must make their way to safety with a wounded member on a stretcher and a soon to be delivering Bunny. They will walk through blazing heat and snow, landing in a ghost town before an eventual visit to an all male mining camp which provides some of the most hopeful moments in Four Of The Apocalypse, moments that are directly pulled from the pages of Harte’s whimsical story, The Luck Of Roaring Camp.

Beautifully lensed by cinematographer Sergio Salvati, and a folksy score that is more McCabe and Mrs. Miller than Morricone, Four Of The Apocalypse consistently strives to be a cut above the later Italian westerns of that period. All of our leads put in fine performances with special notice going to Milian who completely embodies the horror within the maniacal Chaco. Milian is absolutely terrifying and gobbles up screen time whenever he appears in the film.

As for the well-noted graphic violence that Fulci employs in Four Of The Apocalypse, it does in fact hurt the film to the extent that it goes beyond what is necessary to amplify Thomas Milian’s performance as Chaco. It is almost like Fulci felt the need to add the red stuff because be believed that the character of Chaco wasn’t compelling/dreadful enough to be the target of the viewer’s ire. Milian’s psycho method-acting driven performance is definitely enough to make you burn with hatred against Chaco and thus audiences could’ve been spared the extra cruelty that is more off-putting than emotionally effecting.

Regardless of the extemporaneous violence, I would still would place Fulci’s Four Of The Apocalypse along with Enzo G. Castellari’s 1976 masterpiece, Keoma as one of the best examples of a late-era Italian western. Though these films may not be seen as high art in preset day Italy, to me they still resonate as having a brave originality that most American westerns of the same era never possessed.