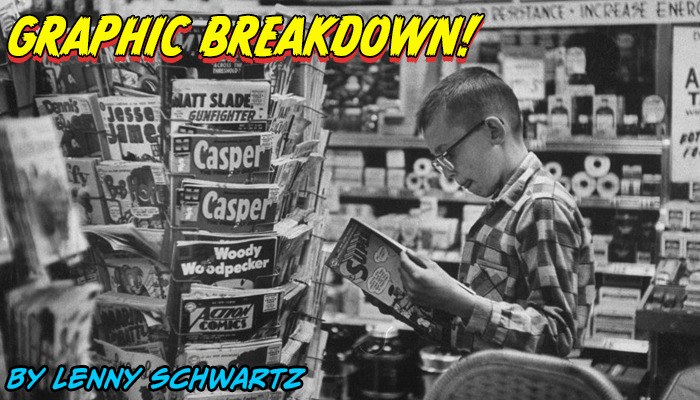 Hello. My name is Lenny Schwartz. I am a playwright and screenwriter from Rhode Island and New York.

So if there is anything you’d like me to review, let me know. I probably won’t listen to you because I am passive aggressive but hey, it might make you feel good. 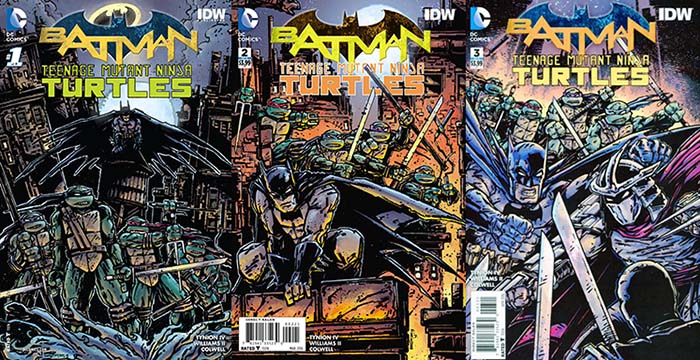 Well, first up on the hit list this week comes the crossover between Batman…and the Teenage Mutant Ninja Turtles. Because no one demanded it! But I promised I would review comic books I normally wouldn’t so here goes.

I guess it could have been fun? For the record, the most recent IDW series by Tom Waltz and Kevin Eastman is pretty darn good. Read that. And Batman by Scott Snyder is fantastic. Read that while you can. Not this.

Basically, Tynion’s story is like one a kid in grade school would come up with. The Turtles comes to Gotham for some reason or other and they meet Batman. And the fight each other’s villains. For six issues. I actually may have preferred a grade school kid write it…at least the story might have had passion.

I’m actually making it sound better than it is.

The only passion in this entire thing is Williams III. His art is pretty terrific. His Batman needs work as every shot he draws makes Batman seem like he has to poop. His Turtles however? They are great and full of electricity. Put him on a regular Turtles book…and not this hacked up story.

THE BLACK HOOD #1-9
Written by Duane Swierczynski with Art by Michael Gaydos and various.
Published by Dark Circle /Archie Comics 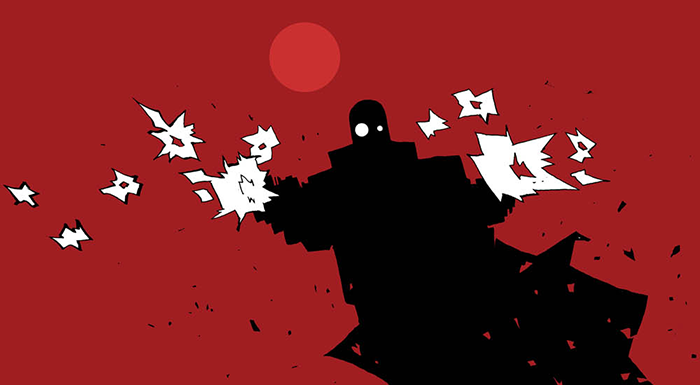 Duane Swierczynski is one of my favorite comic book writers.

And with good reason. His Judge Dredd and Bloodshot comic books were just excellent. The first 8 issues of The Black Hood comic were at the top of my reading pile. Imagine my surprise when I got issue 9 as a preview.

The story of the   is about Officer Gregory Hettinger who takes up the mantle of the Black Hood after accidentally killing the previous guy who had the mantle. And man, it gets dark. Hettinger goes on a drug fueled frenzy, becoming a junkie and an adrenaline addict. The art, establish

Yet, The Black Hood is still one of the most compelling books on the stands. Number 9 continues the new story arc starting with issue 7…but I put them all down because honestly you should pick them all up.

Invest in this series and read it. It’s a hard boiled, gritty, masterpiece Swierczynski is writing here. It moves and is emotional without being pretentious. And for that I give it the following: 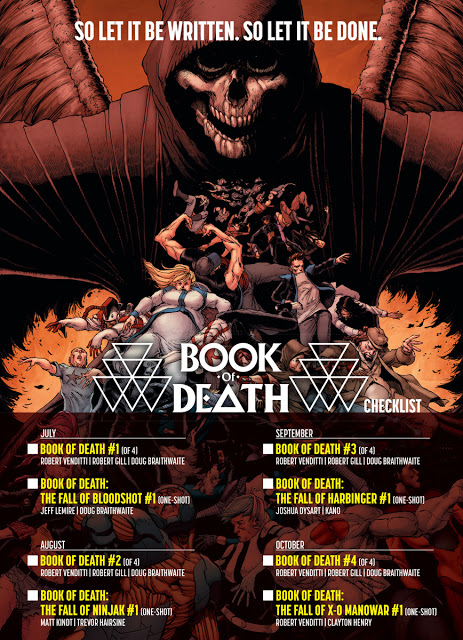 Next up comes the first volume in the Book of Death crossover from Valiant Entertainment. This book is described as the following:

The Valiant heroes. X-O Manowar. Bloodshot. Ninjak. The Harbinger Renegades. Unity. This is how they lived. This is how they died. Now we know. The Book of the Geomancer has recorded it all. But only a young girl – the last in a line of the enigmatic mystics who protect the Earth known as Geomancers – has seen this future come to pass, from the coming cataclysm to the dawn of the 41st century. Alone with her sworn protector, the Eternal Warrior – a soldier battle-forged across five thousand years of combat – the duo must defy their allies to stop the Dark Age that now threatens to eclipse our world.

Venditti has basically created a road movie mixed with horror. It shouldn’t work. Yet it does. I talk about passion a lot, and Venditti has it in spades. It’s exciting, has good characters, and even manages a few surprises. The pacing is great and Robert Gill’s art is really fitting. Braithwaite does well in the art for the “Book” scenes. It’s a solid book.

You can’t go wrong with many of the offerings from Valiant…a newer line built on passion and heart. I like all of their offerings.

The only thing that is missing, is that the Valiant books lately only go so far dramatically. This does the same. It’s good as always but you wish they would push it that little bit more. Still, it’s good. Well worth the purchase. Something I want to reread again. I just want them to be A pluses. Because instead we got a… 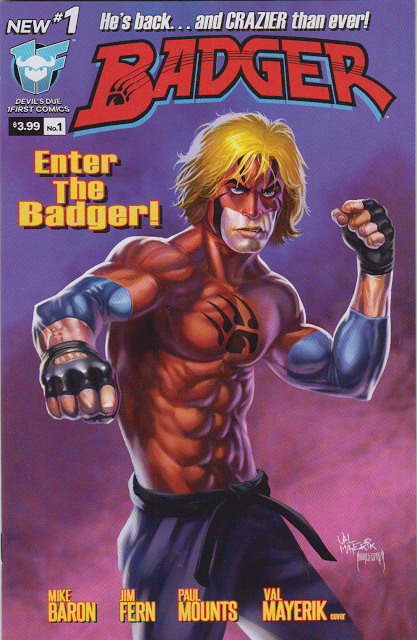 The Badger was one of my favorite comic books growing up. It was the story of veteran with mental health problem who works for a wizard to help out the little guy. It varied in tone and was fun, action packed, and just plain weird.

So, I decided to give the new series a shot. I kind of wish I didn’t now. I have fond memories that are now a little tarnished.

The story is an origin story it seems for the Badger, trying to lure in new readers I’m guessing.

Baron’s story is stale, mostly retreading what has come before. I’d rather read the old ones. This new one lacks charm. I understand retro is in, but this was sadly not fun. Instead of the zany fun I used to, I got…this. Fern’s art is rather unexceptional, and the whole affair is rather boring.

The whole enterprise now is like a friend who got a new haircut and it isn’t very good. Still, it isn’t a complete trainwreck…I liked the ads. And some beats were okay.

Still, read the old series. Or read Badger: Hexbreaker. That was when it was good. Spend your money on something good.

RATING: C- (for the memories) 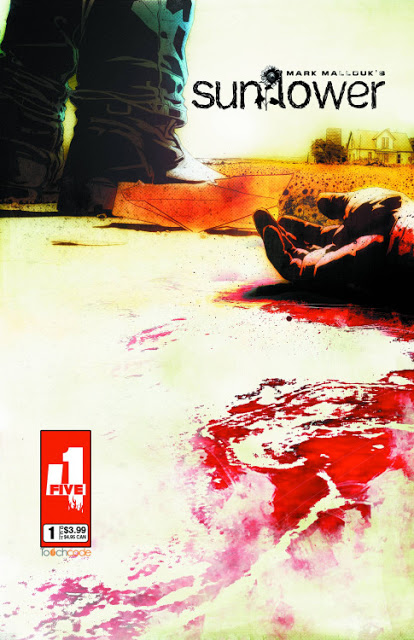 So recently I received all of the books from 451, a brand new comic book company. I decided to check out a title or two and I’m glad I did. The only one I was able to really dedicate time to was Sunflower. (The rest I will read in coming weeks.)

The story comes from Mark Mallouk, screenwriter of the film Black Mass and adapted by Ewington. And it’s good. Like really REALLY good.

The story goes like this: Ten years ago CJ’s husband and nine year-old daughter were murdered off a desert highway near the California/Arizona border. Since that day, CJ can feel only two things – paralyzing shame for not being with her family and quiet fury that the perpetrators were never found. CJ should have been there to defend her family. CJ should have been there to die with her family. And, in the decade since, she might as well have been dead. Until the day a letter arrives. There’s no return address, only one word in the letter. It simply reads: ‘Sunflower’. CJ’s daughter is alive. And now so is CJ. And she will stop at nothing to get her daughter back.

This is a great story without any superheroes. Well drawn characters, great storytelling….this series had me hooked from start to finish. I was reading this into the wee hours of the night and it had me hooked. I like this company. Granted this is my first title…but they have a unique take on the traditional comic book. I hope it catches on.

The weak point here is the art. Lee Carter is decent…but the covers are so giid they make the rest look bland by comparison. A stronger artist would have made this an A plus. The story is so strong and involving I would recommend it to anyone. A strong showing from a new company. No superheroes in this book…just good stories. Let’s see how this company does. But the first book I have read? 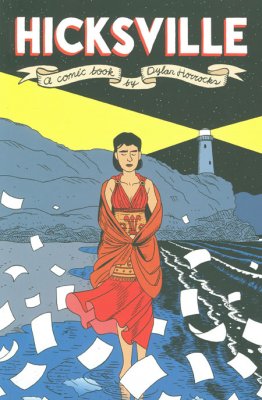 Has anyone read this book? I’ll give you a prize if you have. Or if you find it and go out and read it in the next two weeks. Dylan Horrocks tale is one so sweetly nice and genuine, you can’t help but love it.

World-famous cartoonist Dick Burger has earned millions and become the most powerful man in the comics industry in the few short years since the publication of his first CAPTAIN TOMORROW graphic novel. But behind his rapid rise to success, there lies a dark and terrible secret, as biographer Leonard Batts discovers when he visits Burger’s hometown in remote New Zealand. For Hicksville is no ordinary small town. In Hicksville sheep-farmers and fishermen argue the relative merits of early newspaper strips, while in the local bookshop & lending library, obscure Mongolian minicomics share the shelves with a complete run of ACTION COMICS. But why does everyone there seem to hate Dick Burger?

I just read this book for the first time a few weeks back. This is everything I love in comics: good writing and art working together. I love a book that you feel you will reread again. And that you can’t wait to do so and revisit that world. This book has the goods. Endlessly creative, endlessly beautiful.

This is the real deal kid. So pick it up.

It may be hard to jump into for some. But if you do, you will be rewarded. Give it a shot. It’s a classic.

And that’s it for this week! Stay warm and please be nice to each other. Thank you for reading this. Until next week, I remain…